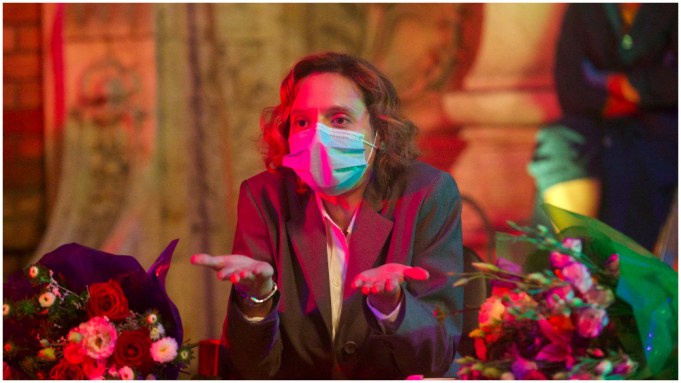 Jude’s latest film is the story of a schoolteacher, Emi (Katia Pascariu), whose life is turned upside down after a sex video shot with her husband is leaked on the internet. Forced to meet the parents demanding her dismissal, she refuses to give in, instead confronting the hypocrisy and prejudice behind Romanian society’s attitudes toward sex.

“Bad Luck Banging” is produced by Ada Solomon of Romania’s microFILM, in co-production with Paul Thiltges Distributions (Luxembourg), endorfilm (Czech Republic) and Kinorama (Croatia). Photography is by veteran cinematographer and long-time Jude collaborator Marius Panduru (“I Do Not Care If We Go Down in History as Barbarians,” “Aferim!”).

In his ninth feature, Jude leverages the hysteria and moral panic around the leaked video to examine “what is obscene and how do we define it.” “We are used to acts which are much more obscene, in a way, than these small acts,” he told Variety, pointing to deepening class divisions and societal ills that are endemic to modern-day Romania.

Shot last summer in Bucharest, “Bad Luck Banging” is a snapshot of Romanian life in the midst of the coronavirus pandemic, and an example of what Jude describes as cinema’s ability “to make a capsule of the moment.”

“If you went down on the street, the signs that remained — posters for concerts, empty restaurants, and so on and so forth — were already signs of a non-existent reality,” the director said. He recalled being struck by the absurdity of these glimpses of a world already rendered unrecognizable by the pandemic. “From this observation came the idea that cinema can have this possibility to capture things, to capture a moment, to capture the signs of the time passing.”

Jude won the Berlinale’s Silver Bear for best director in 2015 with “Aferim!”, a raucous, Romanian Western about the pursuit of a runaway Roma slave in 19th-century Wallachia, which Variety’s Jay Weissberg described as “an exceptional, deeply intelligent gaze at a key historical period, with significant ramifications for today.”

More recently, the director won the top prize at Karlovy Vary in 2018 for “I Do Not Care If We Go Down in History as Barbarians,” a stirring, meta-fictional commentary on Romanian Holocaust denial. Last year “Uppercase Print” and “The Exit of the Trains,” which Jude co-directed with Adrian Cioflâncă, world premiered in the Berlinale’s Forum sidebar.

Known for his formal experimentation and innovation, “Bad Luck Banging” is the latest example of the director’s ongoing effort to push the boundaries of contemporary cinema.

At this year’s EFM, Heretic Outreach is also repping Ronny Trocker’s Sundance competition title “Human Factors,” which will have its European premiere in the Berlinale’s Panorama strand.