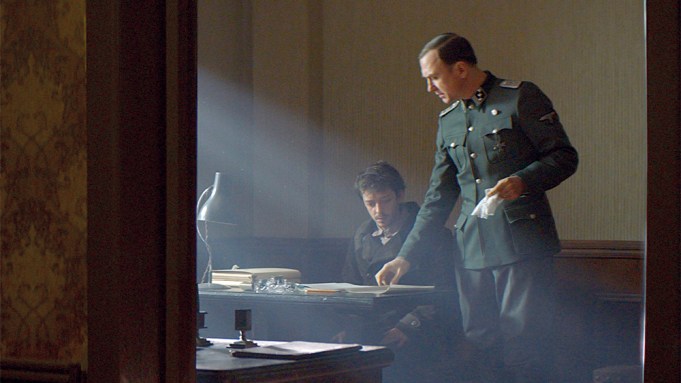 Vadim Perelman’s “Persian Lessons” has been pulled from the international feature film Oscar race, where the acclaimed WWII drama was representing Belarus.

As part of the international feature film submission process, a country’s selection committee is required to provide a list of credits in key creative positions, both above and below the line. Variety understands that the Academy of Motion Picture Arts and Sciences removed the film from consideration because it didn’t meet the category’s eligibility requirements for the majority of creative control to originate from residents of the submitting country.

The WWII drama, which world premiered at the Berlin Film Festival last year, is set in occupied France in 1942 and stars Nahuel Perez Biscayart (“Beats Per Minute”) as a Belgian Jew who narrowly avoids execution by a Nazi firing squad when he claims to be Persian. He is then enlisted to teach Farsi — which he does not speak — to the head of the camp, played by German star Lars Eidinger, who dreams of opening a restaurant in Iran once the war is over.

Ilya Zofin wrote the script based on the story “Erfindung Einer Sprache” by Wolfgang Kohlhaase. The film was first written in Russian, and then translated into English and eventually into German, a language director Perelman (“House of Sand and Fog”) doesn’t actually speak. The filmmaker also invented the fake version of Farsi spoken in the film in collaboration with a Russian linguist. The pair conceived of a bespoke grammar as well as a 600-word dictionary.

Ilya Stewart, a producer on the film, confirmed to Variety that it has been pulled from the race.

“The Belarus committee and our producing partners felt that the film met all the necessary requirements to represent the country at the Academy Awards. However, the fact that the film is an international co-production with the involvement of several countries, and that the primary language is not the official language of the submitting country always meant that our case was quite a unique one,” said Stewart.

“While we are of course very disappointed, we respect the Academy’s decision and are looking forward to ‘Persian Lessons’ continuing on its path to an international audience despite the language barrier which, ironically, is the theme and subject of the film.”

“Persian Lessons” is produced by Moscow outfit Hype Film (“Leto”) and co-produced by Berlin-based LM Media and One Two Films in association with Belarusfilm. Memento Films International (“Call Me By Your Name”) is handling world sales.

The film will be released in the U.S. next year by Cohen Media Group, and across all major European territories in the first quarter of 2021.

“Persian Lessons” is the second film to be disqualified from the international feature film race following the exclusion of Deepa Mehta’s “Funny Boy,” which was Canada’s initial Oscar entry. It was pulled due to the amount of English dialogue in the film.

A shortlist of 10 films for the international feature film category will be unveiled on Feb. 9, and the five official nominees will be announced on March 15. The 93rd annual Academy Awards will take place on April 25.

Clayton Davis and Leo Barraclough contributed to this report.