Paolo Sorrentino, Thomas Vinterberg Talk ‘Another Round’ and Power of Positive Drinking (EXCLUSIVE) 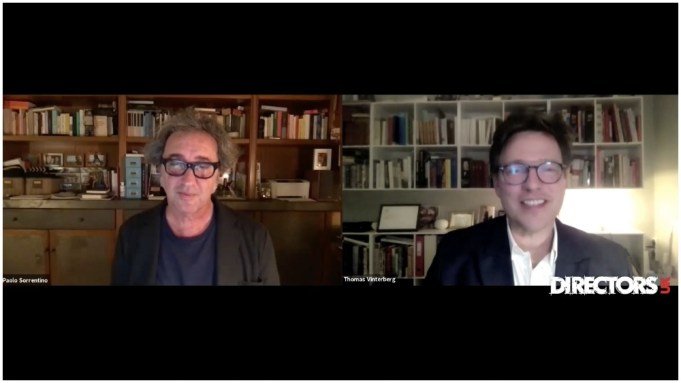 Italy’s Paolo Sorrentino and Denmark’s Thomas Vinterberg first met years ago when the directors’ respective films “The Great Beauty” and “The Hunt” were both nominated for the 2014 Foreign Language Film Oscar, which Sorrentino’s pic won.

Vinterberg was the only colleague on the awards circuit whom Sorrentino was really fond of, he recalls in an online conversation organized by British trade org. Directors U.K., video excerpts of which Variety has been given exclusive access to. And the feeling was mutual. Vinterberg “was really happy to see me happy when I won,” he says.

It’s clear that now Sorrentino would like to see Vinterberg win the renamed Best International Feature Oscar for “Another Round,” his nominated tragicomedy in which four friends, all high school teachers, test a theory that they will improve their lives by maintaining a constant level of alcohol in their blood.

In their free-flowing chat the prominent directors and pals, talk about ageing, writing, and drinking. Edited excerpts:

Paolo Sorrentino: One question I would like to ask [Thomas]: I am 50 years old; I think you are 50 as well. What was very moving for me [about your film] is that it’s about the difficulties that the middle-aged people have…to keep clear [in their mind] the ambitions we had when we were very young.

Thomas Vinterberg: I felt all these themes were in my head while doing this [film]. I surrounded my main character [played by] Mads Mikkelsen with youth, with youngsters. Who in the beginning are like sharks: they smell his insecurity and want to kill him…At the end he becomes part of them, and he becomes weightless. This mirror between youth, weightlessness and age… and being a man who only exists, but does not really live… [these] are definitely the themes we tried to deal with in this movie. And, you know, we used the alcohol to create the element of risk; to put these men on thin ice. But also to create the element of love and togetherness. I like to ask people how many married couples they know who made each other sober. I don’t know how it is in Italy, or in your life Paolo. But I believe it’s not that many. So it’s also about being lonely and finding each other again. Those are some of the themes in the movie.

Sorrentino: I envy you because I’ve always thought that it was a good idea to make a movie about that precise moment where you are not drunk, but a little drunk. A precise moment that lasts 20 minutes to one hour: you are a little drunk and believe that everything is possible. When I drink, and I drink every evening, there is a precise moment where I believe that happiness is possible; that my friends the best friends that one can have; that my wife is exactly the perfect woman I want. It’s something that lasts 20/30 minutes, and I’ve always thought this was a perfect movie. I was very happy to see your movie, because it’s exactly what I think every night when I drink a couple glasses of wine. I thought it was impossible to make a movie about that, and I thought it was also impossible to do even just one scene about that. So I was completely overwhelmed when I saw the movie and understood that you did an entire movie about that precise moment in the life of a person. Do you also have the same feeling that there is a moment when you drink not too much and not so little…that everything is possible and life could be perfect? If you have the same feeling I have, [then] I feel less alone.

Vinterberg: I do. Of course. And I sometimes wish that those 20 minutes could be extended to a day. Even an hour. I guess that’s what they’re trying: the theory they embark on is exactly to try to find that place when you’re not drunk and you’re not sober. When you lose your self control and become creative. Problems disappear or become smaller and everybody is beautiful. And you see love around you. And I think some people have lived in a constant pursuit of those 20 minutes. With ups and downs because I don’t think you can keep it for a whole day. I wonder if Churchill was one of those people!

Sorrentino: I think criminals are like that. They believe problems are not so important. It’s exactly what I feel when I drink in that measure: the problems that appear to me in the morning as something unbelievably [huge]…in that precise moment, they then appear as something not so important. Many criminal minds I believe live with this feeling, otherwise they would not be able to do what they do against the law.

Vinterberg: Paolo, do you drink when you write your scripts?

Sorrentino: Yes, when I write I listen to dance music. Very stupid music on the radio, music so stupid that [it] puts me in a situation very similar to the wine. Where I forget where I am…It’s like I am not sober, but I am not drunk. When I write I listen to that kind a music that brings me in [to] the same situation when in the evening I drink…because I always wait for 7 p.m. before drinking.

Vinterberg: Those 20 minutes…I believe that very, very important things in world history have happened…decisions have been made by people who have been exactly in that zone that you talk about.