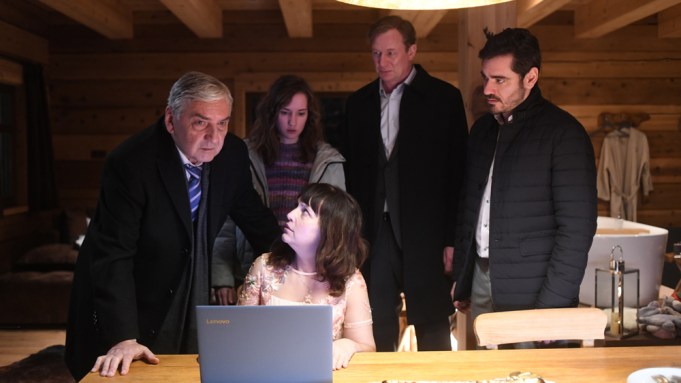 After winning Karlovy Vary Film Festival’s Crystal Globe for best director in 2018 for “Winter Flies,” the Slovenian-born Czech director Olmo Omerzu returns to its competition with the world premiere of his fourth feature “Bird Atlas.” It is co-written with his “Winter Flies” collaborator Petr Pýcha. The film’s sales agent, Cercamon, has given Variety exclusive access to its trailer.

Although it is an ensemble drama, the film unfolds through the perspective of a stubborn patriarch (Miroslav Donutil), old and unwell, but still running a family business, and the company’s accountant (Alena Mihulová), desperately trying to catch her last chance for true romantic love. And then there are the birds who comment upon the action like a Greek chorus. Omerzu notes, “This serves as a contrast to our main characters, who are so stubborn and so fixated on their own selfish needs and problems that they’re missing the bigger picture.”

Another cheeky example of the bird motif appears as the main character, Ivo, saves his lovers’ numbers in his phone using bird names. Omerzu uses that to further define the character’s patriarchal attitude and his definitely non-PC sense of humor.

Parts of the plot seem as if they could have been ripped from contemporary headlines. Omerzu agrees, noting, “In recent years, there has been a dramatic rise in internet-related crime, especially various types of internet fraud that targets lonely people. An interesting feature is the frequent use of the identity of a U.S. soldier in order to evoke a sense of sympathy, adventure, and excitement.”

Omerzu’s previous films included some big Czech stars, but none of the age and stature of the imposing Donutil. Omerzu says, “Already in the script phase, I was determined to make it a role for Miroslav Donutil, who represents a unique phenomenon in the Czech Republic. He is one of the most famous and popular actors, often associated with comedies or narrative shows and less known for dramatic film roles, although he is an excellent dramatic theater actor. His personality carries a certain aspect of patriarchy that was very important for this role in particular.”

A believer that “good things are born through dialogue and discussion,” Omerzu tries to build free space for cooperation and joint research throughout the filmmaking process. The ensemble cast had a week of rehearsals before filming kicked off. Omerzu says, “The main goal of the rehearsals is to achieve a sense of chemistry amongst the ensemble and to synchronize and harmonize the roles.” Interesting improvisations from the rehearsals may make their way into the final script.

Some of the performers, like Eliška Křenková (also in the East of the West competition title “Two Ships”) have practically grown up alongside Omerzu. He says, “Not only is it my third film with Eliška but also my fourth with Martin Pechlát. Both are exceptional actors who aren’t afraid of insecurity or of a work process that’s based on research. I believe having a mutual trust is extremely important in a director’s work with actors, especially when we get down to those themes that evoke a certain level of discomfort.”

Omerzu continues to work with several of the same technicians since his days at FAMU, including cameraman Lukáš Milota and editor Jana Vlčková. He says, “It’s easier for me to work with people with whom I can develop the right creative language together while also being able to relate to previous work. Both my cameraman and editor know very well what I’m interested in when it comes to my films and what it is that I’m aiming for.”

What’s next for Omerzu? He recently finished a short, “The Last Day Of Patriarchy,” and he’s financing his next feature “Ungrateful Beings.”