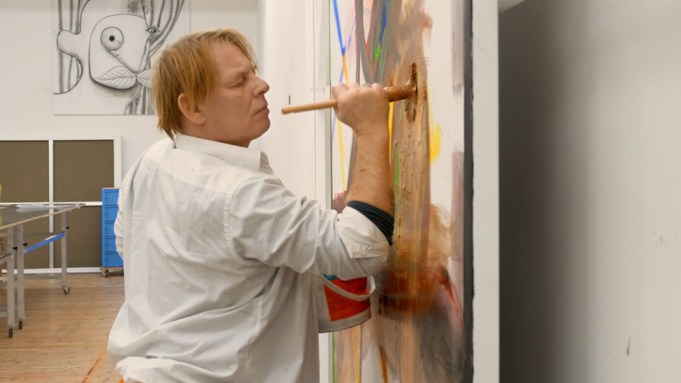 The work stars Ben Becker, whose credits include “Brother of Sleep” and “Comedian Harmonists,” and features the voice of Charlotte Rampling. The film is completing postproduction with PTI presenting the trailer during the Toronto Film Festival’s hybrid market.

The film depicts Oehlen struggling with a painting and pondering the meaning of his creation. Becker impersonates the painter and re-creates a painting that Oehlen himself is creating step by step behind the camera, with the actor improvising the process in front of the camera.

According to a statement, the film “follows the artist as he is struggling and suffering along this process, with us watching in joyful despair, wondering what might happen next, until the white canvas has turned into a finished painting.”

The statement added: “ ‘The Painter’ is a constant flow of the artist’s journey with elements of farce and comedy topped with emotional moments of truth […] leaving it up to us to decide what is real and/or authentic.”

Mike Downey, executive producer on the film, and chairman of the European Film Academy, added: “It’s also an enigma about authorship, the art world, the public and the market. It plays with a number of ideas which are not only profound with respect to how the man in the street defines what is art – it also challenges to what extent the artists’ role is authorial, and to what extent the participants play this role.”

Hirschbiegel and Oehlen are long-time friends and collaborators and both studied at the Hochschule der Bildenden Künste Hamburg, with “The Painter” being their first artistic collaboration in a long while.

The music is contributed by an icon of the German electronic music scene, singer-composer DJ Gudrun Gut. Gudrun was founding member of the band Malaria and the experimental project “Matador” with Pepita Duursma and Beate Bartel, as well as running the Music Project Ocean Club, which had regular shows in the legendary Berlin club Tresor.