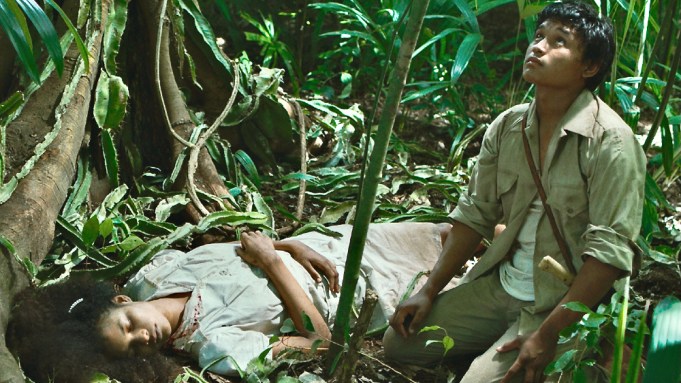 Loosely inspired by the novel “Caribal: El Infierno Verde” by Mexican novelist-diplomat Rafael Bernal, “Tragic Jungle” is set in 1920 on the border between Mexico and Belize. It is here where a ragtag band of Mexican gum workers come across a mysterious young Belizean woman on the run, played by local actor Indira Rubie Adrewin in her film debut. Her mute presence arouses both tensions and desire in equal measure. Unbeknownst to them, they face the mythical Mayan seductress Xtabay, who preys on unsuspecting men in the jungle.

“The jungle is a living being, harassed by those men trying to steal its treasures; but it takes revenge in different ways, with poisonous plants, swarms of mosquitoes, fierce animals and with the enchantment of mysterious creatures,” Olaizola noted in her director’s statement.

Known for her intrepid filmmaking, Olaizola spent four months at the Mexican-Belize border to research on the subject matter of gum-making and the mythical legends of the land. “Tragic Jungle” is her most ambitious project to date.

“We filmed for seven weeks in the area south of Quintana Roo, venturing as deep into the jungle as much as we could,” said Olaizola, who first gained recognition for her multi-awarded debut feature about a serial killer living in her grandmother’s guest house, the documentary “Shakespeare And Victor Hugo’s Intimacies.” The disciplines of documentary filmmaking continue to inform her fiction work.

“Tragic Jungle” is a co-production with France and Colombia and is backed by the Cinemas du Monde-CNC, the Cannes Festival’s Cinéfondation L’Atelier workshop and the ARRI Support Program.