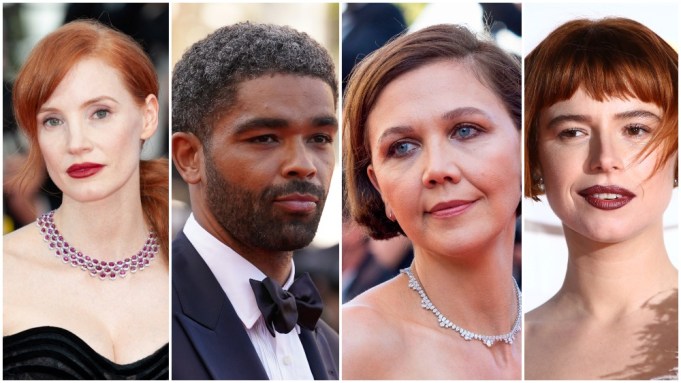 Nothing says ‘Cannes is back’ like the glitzy annual Chopard Trophee Dinner, where Jessica Chastain and Maggie Gyllenhaal on Friday saluted the return of the festival while celebrating this year’s award recipients, U.K. actors Kingsley Ben-Adir and Jessie Buckley.

Chastain — who doesn’t have a movie in Cannes but came along for the ride — played Master of Ceremonies for the presentation, joking that she was the unofficial “godmother” of the Chopard Trophee, which is given to both a male and female recipient every year. The dinner took place at the Majestic hotel in Cannes, where attendees included festival jury members Spike Lee, Mélanie Laurent, Tahar Rahim and Song Kang-Ho, along with the likes of Andrea Arnold, Bella Hadid and Adrien Brody.

“It was 10 years ago that I came here with ‘Take Shelter’ and ‘The Tree of Life’ and I had no idea how much my life would change because it really was my introduction to the world as an actress, so, to me, this festival will always be my family, my friends, and one of the dear, fond memories of my life,” said Chastain, who will next be seen (and virtually unrecognizable) in Michael Showalter’s “The Eyes of Tammy Faye” opposite Andrew Garfield.

Chastain awarded a Chopard Trophee to “One Night in Miami” star Kingsley Ben-Adir, who also starred in the “High Fidelity” series as well as “The Comey Rule,” where he played former President Barack Obama.

“I saw Tahar Rahim and he reminded me that when I started drama school in 2008 there were so many films — I used to go to the Curzon and watch so many independent films — and Cannes always used to pop up on the DVDs. So many films that have come here mean so much to me, ‘A Prophet’ being one of them,” said Ben-Adir.

The actor then thanked his “One Night in Miami” director Regina King, without whom “I definitely wouldn’t be standing here.”

“I know it was a difficult choice for her because someone dropped out of playing [Malcolm X] at the very last minute, and she didn’t have much time,” said Ben-Adir. “It came down to three of us and I just happened to be the most experienced and I put down the best tape.”

He added that it wasn’t an easy decision because he was a British actor playing an iconic historical American figure, and “the situation is a little bit sensitive right now” — a reference to the tensions among some Black U.S. actors around Black British actors portraying distinctly American characters in film.

Gyllenhaal directed Buckley in her forthcoming adaptation of the Elena Ferrante novel, “The Lost Daughter,” which marks the actor’s directorial debut.

“I’m picky about actresses,” said Gyllenhaal. “It’s hard to get my total love. And Jessie is a beast. There are a few actors and actresses out there who are like that, but she’s a wild, feral animal. I couldn’t even get her to pick up the phone with the same [hand] on more than one take, and so I stopped trying and her work is incredible. I’m beyond thrilled for her and I have a feeling the world is about to get blown away by Jessie Buckley.”

Buckley wasn’t in attendance because she’s in Toronto quarantining before starting a shoot next week; however, she sent through a video message.