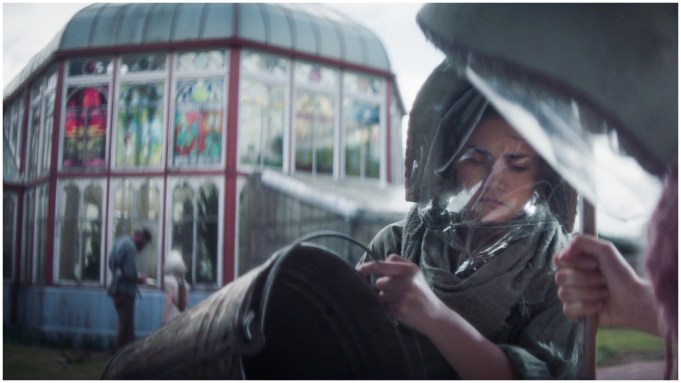 Under the agreement, which Local Motion signed in association with Crave Pictures, the company will produce a slate of films to be directed by “Glasshouse” helmer Kelsey Egan.

Associate producer Emma Lungiswa de Wet, who co-wrote “Glasshouse” with Egan, says the trio of films will shine a new and unsettling light on South Africa, which continues to reckon with the legacy of Apartheid nearly three decades since its transition to democracy.

“A dystopian slate allows us to look at the underbelly of the dream – what’s at the end of the Rainbow Nation?” said Lungiswa de Wet. “We have a long brutal history that we’re only beginning to come to terms with. We’re a newish democracy, a developing nation with a young population, so there’s mixed energy and frustration. Sci-fi and Afrofuturism offer a path of imagining alternate futures.”

“Glasshouse” is set after an airborne dementia known as “the Shred” has left humanity roaming like lost and dangerous animals, unable to remember who they are. Confined to their airtight glasshouse, a family does what they must to survive – until two sisters are seduced by a stranger who upsets the family’s rituals, unearthing a past they’ve tried to bury.

Pic toplines British actress Jessica Alexander, who also stars in the upcoming live action remake of “The Little Mermaid,” and newcomer Anja Taljaard as sisters Bee and Evie, opposite Hilton Pelser (“Moffie”) as The Stranger. Greig Buckle, who co-produced the Oscar-shortlisted “Life, Above All” and line produced the Michael B. Jordan starrer “Chronicle,” is producing through Local Motion Pictures.

“‘Glasshouse’ exists in a dystopia unrooted by time and place. A Victorian glasshouse acts as sanctuary in a broken wasteland – it’s a colonial relic that hints at an uneasy past,” said Lungiswa de Wet. “The film’s themes of family and forgetting are provocative and universally relatable. The setting is unplaceable – it could be anywhere – yet the film’s vision of the past is uniquely South African. The local philosophy of Ubuntu holds that identity is collective and that ancestral memory shapes the present: ‘I am because we are.’”

Egan described her feature directorial debut as an extension of a deep-rooted fascination with science fiction and its ability to put society under the microscope. “Of all the books and films I devoured as a child, science fiction left the deepest mark,” she said. “I’ve always been drawn to the darker places, to exposing the marrow of what shapes us and the impact that can have, either individually or societally. I’m fascinated by the mutability of human behavior and relationship dynamics in different contexts.”

She continued: “Sci-fi is a powerful genre, a platform to explore ‘the other.’ It interrogates our world by exploring alternative paths, and often sheds light on the human condition by exposing our tragic flaws. It can serve as a warning or as inspiration – there are other ways to live and other ways to do things”

“Glasshouse” signals the growing success of genre filmmaking in South Africa, which in recent years has produced festival hits such as Nosipho Dumisa’s crime drama “Number 37,” which premiered at SXSW; Michael Matthews’ modern Western “Five Fingers for Marseilles,” which bowed in Toronto; and Travis Traute’s thriller “Indemnity,” which is also premiering at Fantasia.

“South African genre films are still coming of age but have recently started to find acceptance in the world market as they grow into and find their own vision and voice,” said Buckle. “It is certainly a growth market and I believe that both horror and sci-fi will become more prevalent as South African filmmakers grow in stature and confidence.”

Yolisa Phahle, CEO of general entertainment and connected video at the MultiChoice Group, which owns the Showmax streaming service, is likewise bullish on the prospects for local filmmakers tapping into genre’s potential.

“At SXSW this year, MultiChoice’s ecological horror ’Gaia’ won the ZEISS Cinematography Award and was picked up by Decal for North America. So if you look at that, or ‘Number 37’ winning the best direction award at Fantasia in 2018, or Fantasia’s selection this year of both ‘Glasshouse’ and ‘Indemnity,’ a South African action film MultiChoice has acquired, it’s all part of a growing wave of African directors wanting to make commercial films that can travel widely,” says Phahle. “You can expect an explosion of genre films and series from Africa in the near future.”