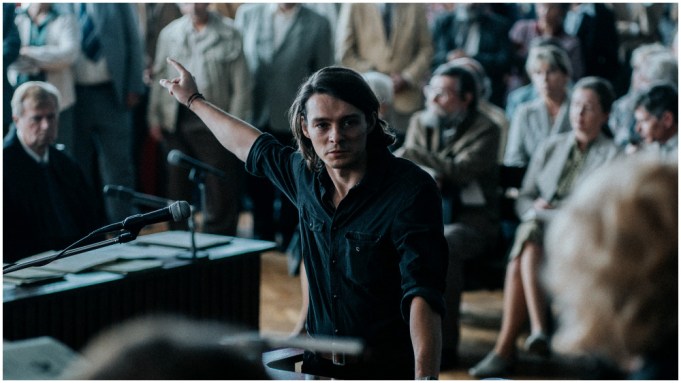 New Europe Film Sales has closed several deals for “Leave No Traces,” from Polish director Jan P. Matuszyński (“The Last Family”), which has its world premiere in competition at the Venice Film Festival. Variety has been given exclusive access to the film’s trailer.

Produced by Aurum Film, the production house behind Jan Komasa’s Oscar-nominated “Corpus Christi,” pic has sold to Imagine Film Distribution for Benelux and Scanorama for Lithuania. As previously announced, the film was also picked up by Memento Films Distribution for France.

Set in Warsaw in the 1980s, “Leave No Traces” is based on the real-life story of a young man (Tomasz Ziętek) who witnesses the fatal beating of his friend (Mateusz Górski) by the police. Determined to testify about the killing in court, he must stand up to the full force of a communist regime that employs the secret service, the police force, the media and the corrupt court system to try to silence him.

Speaking to Variety ahead of the film’s Venice premiere, Matuszyński said he was approached by producer Aneta Hickinbotham several years ago with a copy of Cezary Łazarewizc’s “Leave No Traces: The Case of Grzegorz Przemyk,” the book on which the film was based.

Though it described one of the era’s seminal court cases – an event that would rally members of the Solidarity movement that eventually toppled Poland’s communist regime – the director was surprised that it had never been adapted for film. He was instantly drawn to its rich, multi-layered narrative, as well as the challenge of depicting the events inside the police station that led to Przemyk’s death.

“One of the questions that got into my mind while reading it was how many things can you actually find out about what happened there? How much of the truth can you get?” he said.

It’s a question that prompted him to construct a film whose shifting perspectives shy away from moral judgments. “I really tried to dig through every detail of those main and supporting characters to know their truth – why they did this, did they think this was right or wrong,” he said. “I don’t want to judge my characters in a film. I don’t care if it’s based on a true story or not. That’s not the role of cinema.

“Every great film is some sort of motivation on a theme or a story, not saying what is wrong and what is right, or who did what and why,” he added. “I really care about the freedom of the viewer to decide. I have to give them tools to think – not to say that this one is good or this one is bad.”

“Leave No Traces” is produced by Leszek Bodzak and Aneta Hickinbotham for Aurum Film, in co-production with Les Contes Modernes, Arte France Cinéma, Auvergne-Rhône-Alpes-Cinéma, Canal Plus, Background Films, Magiclab, Czech Television, and the Mazovia Warsaw Film Fund. It was produced with the support of the Polish Film Institute, Région Provence-Alpes-Côte D’azur, and Région Auvergne-Rhône-Alpes, and in partnership with the Centre National du Cinéma et de l’Image Animée and Czech Film Fund.

Matuszyński’s “The Last Family,” which premiered at the Locarno Film Festival, was a disturbing biopic of the late-20th-century painter Zdzisław Beksiński and his troubled family, which Variety praised for its “exceptional camerawork and an unerring eye for period detail.”

“Leave No Traces” similarly evokes the texture of 1980s Warsaw in meticulous detail, something the director accomplished while working closely with Fertacz, production designer Paweł Jarzębski, and other department heads. “I’m the kind of director who really likes to work in pre-production with each department,” said Matuszyński. “Like I did with the DoP, I did the same work with make-up and costume and design, because I know that every detail matters.”

The result is part slow-burn drama, part spy-thriller, in which the director incorporates some of the genre elements that he explored recently while shooting the eight-part series “The King of Warsaw,” a 1930s-set Canal Plus Polska drama with echoes of “Peaky Blinders” and “Gangs of New York.”

“I knew that the film would be long, and I knew that this is a multi-layered story,” he said. “I thought that I could use genre to make it more attractive to the audience, mixing drama and spy-thriller [elements].” Drawing inspiration from the early works of Francis Ford Coppola and Martin Scorsese, Matuszyński also tried to evoke the simmering menace of another classic of ‘70s American cinema. “It’s like in ‘Jaws,’ when you know that there’s a shark in the sea. You’re afraid every time you see the beach.”

Though tapping into the fear and paranoia of communist-era Poland, “Leave No Traces” nevertheless finds echoes in the present, with the steady creep of rightward politics not only in Poland but across the world, and the fight for civil liberties being waged on ever more battlefields. Matuszyński pointed to the murder of George Floyd as an example of how the same abuses of power that led to the death of Grzegorz Przemyk are a rallying point in the search for justice today.

“For me, cinema is some kind of strange mirror where you can see stories from the past that are somehow connected to the present,” he said. “Or you can take some things out of it and make the world a better place right now. I did this film because I wanted to remember this story, and this is the only thing I can do to [try to prevent] repeating that kind of thing in the world.”