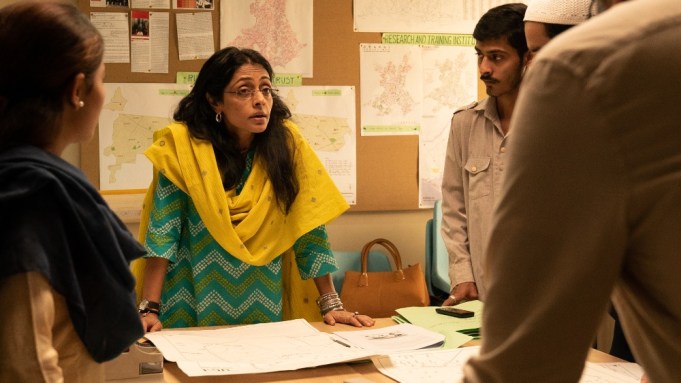 Variety has been given exclusive access to the international trailer for “Into Dust,” an upcoming dramatic short from Academy Award-winning filmmaker Orlando von Einsiedel (“Virunga,” “The White Helmets”) produced by Grain Media, Rideback and Fuse Entertainment. The short will launch this Friday on streaming platform WaterBear and be available to watch on Apple TV and Roku devices.

“Into Dust” is the true story of Perween Rahman, an activist who was murdered after she stood up to Karachi’s water mafia in the South of Pakistan. Set against the growing global water crisis and its impact on food, health, energy, governance and political stability around the world, the film not only depicts Rahman’s inspiring work, but the fight by those close to her to continue that work after her death, and to battle the forces who cut her life short.

In the trailer, we’re introduced to Rahman, played by Indu Sharma, and the tensions she faced off against daily. Dripping taps, armed guards and a dust-covered city give an idea of the scale of her opposition. We also see that, despite the best efforts of evil men, Rahman’s fight did not die with her.

“This is a story that really spoke to me on multiple levels; the bravery of Perween Rahman and her sister Aquila Ismail; a story about the loss of a sibling, something I have experienced in my own life; and the terrifying specter of a world threatened by water scarcity,” says von Einsiedel. “We wanted to pay tribute to Perween Rahman’s extraordinary life and work, whilst also making a film that sparked a conversation about water usage and consumption. We stepped away from a documentary format to tell a docudrama narrative that we hope people can emotionally connect to.”

Sky has released a study which reveals that Game Zero, the broadcaster’s initiative executed with London soccer club Tottenham Hotspur and independent carbon specialists RSK and Natural Capital Partners, was a success, managing to hit the net zero carbon emissions goal for the Sept. 19 Tottenham-Chelsea game. To get there, players came to the stadium on biodiesel fueled busses; participating fans chose to walk, use public transport or arrive in hybrid and electric cars; the stadium was powered by 100% renewable energy on gameday; all food served inside the stadium was locally and sustainably sourced with 94% more vegetarian and plant-based meals sold; and the Sky Sports production crew reduced its emissions by 70%. The news wasn’t all good for the home fans however, as their team fell 3-0 to the current league leaders and local rivals.

Endeavor Content has boarded “Headhunters,” a dark corporate thriller series based on Jo Nesbø’s novel of the same name and inspired by the BAFTA-nominated Scandinavian film adaptation. “Headhunters” is produced Yellowbird Norway, and co-produced by Sweden’s C More and TV2 in Norway. The series stars Axel Bøyum (“Betrayed”) and Martin Wallström (“Mr. Robot”). Geir Henning Hopeland serves as director as well as co-writing the screenplay with Rolf-Magne G. Andersen. The series is set in Norway with filming currently underway. Endeavor Content will handle global sales outside the Nordics. “Headhunters” follows Roger Brown (Bøyum), a headhunter lying and manipulating his way to success both in his career and in his love life. But one lie leads to another, and soon he is so entangled in his own stories that it becomes a danger to both himself and the people around him. The series is currently in production and will premiere in 2022.

High End Productions, launched earlier this year by Dr. Herbert Kloiber in partnership with Constantin Film, is developing a historical drama series about the life of Emperor Maximilian of Mexico and his wife, Charlotte of Belgium. The company is teaming with “Spy City” novelist and screenwriter William Boyd on the four-part limited series. Shooting is planned for late summer 2022, and will take place in original locations in Austria, Northern Italy, France and Mexico. The ambitious production boasts an estimated budget of $20million.

The Tokyo International Film Festival (TIFF), Japan’s biggest film event, has announced its dates for its 35th edition, less than three weeks after its 34th edition ended. TIFF will unspool for 10 days from Oct. 24 to Nov. 2, 2022, while its concurrent film and TV market, TIFFCOM, will be held for three days from Oct. 24 to 26. This year the festival moved from Tokyo’s Roppongi sub-center to new venues in the Hibiya-Yurakucho-Ginza area, a traditional hub of entertainment businesses in the nation’s capital. This is was part of a extensive shakeup that brought in a new programming director, Ichiyama Shozo, while strengthening ties with the festival he used to head, Tokyo Filmex. The newly discovered Omicron variant, however, could spoil TIFF’s plans for a return to normality, such as extending invitations to foreign filmmakers, who were conspicuous by their absence at TIFF this year. – Mark Schilling

BBC Studios has secured an initial content package deal with Nigerian streamer ARISEPlay in the form of a 12-month agreement which will bring more than 200 hours of British content to the streaming platform. It’s BBC Studios’ largest partnership in the African country, and includes standout, award-winning titles such as “Luther,” “Small Axe” and “Famalam.” BBC Studios catalog launches on the player today and will be available to ARISEPlay subscribers for at least one year.

Screen Manchester has launched a new, comprehensive crew and facilities database meant to future-proof employment opportunities for the region’s HODs and essential film and TV crew. A free service, the database will be available to producers, broadcasters and streamers looking to hire Manchester-based freelance crew based on their experience and to source facilities across the region. The database is headed by Elli Metcalfe, a former Granada and ITV/BBC freelance producer who joined Screen Manchester from SharpFutures.

Actor, musician and author Asim Chaudhry will host the upcoming 24th British Independent Film Awards on Sunday, Dec. 5. After last year’s event was postponed and then livestreamed in February 2021, the ceremony will return to Old Billingsgate for an in-person gala celebrating the best in British and international independent film. Chaudhry will be joined by several major cinema figures who will help distribute prizes on the evening, with TV host Yinka Bokinni returning to host this year’s red carpet alongside radio presenter Sian Eleri.

The World Congress of Science and Factual Producers (WCSFP) will head to Glasgow, Scotland in 2022, for the event’s 30th edition. A gathering for creators of science, history and natural history content, Congress ’22 will see a return to the event’s in-person format after two consecutive years of holding the Congress virtually. Congress ’21 is happening now online, where conference director Paul Lewis and BBC Studios director of factual Tom McDonald made the announcement. Congress ’22 will host a range of panels and diverse lineup of speakers which will examine current programming trends, industry intelligence and how technology is impacting the factual community. It will also see the return of the popular Close Encounters of the Funding Kind sessions and Speed Dating one-on-one pitching meetings.

Society of London Theatre (SOLT) and UK Theatre chief executive Julian Bird has announced that he will step down from his roles with the theaters in May 2022, 11 and a half years after taking the reins. Under his watch, the theaters have been a driving force for change across the sector and successfully navigated upheaval caused by the COVID-19 pandemic. SOLT and UK Theatre will employ a global executive search and leadership advisor to help find the new appointee.