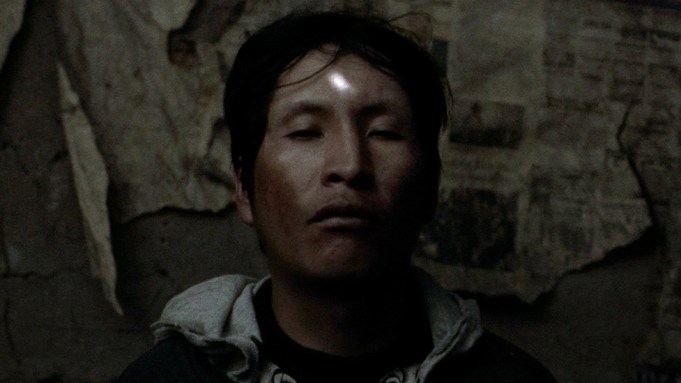 Variety has been granted exclusive access to a trailer of Bolivian director Kiro Russo’s second feature, “El Gran Movimiento,” which is premiering at the Zabatelgi Tabakalera section at San Sebastián, after winning the Venice Horizons Special Jury Prize earlier this month.

Sold by Brussels-based Best Friend Forever, it has been acquired for the U.K. and Ireland by Sovereign Film Distribution. It centers around an encounter between a lung-diseased-former-miner Elder (Julio César Ticona) and an eccentric shaman Max (Max Eduardo), who attempts to restore him back to health.

As with his earlier feature “Dark Skull,” Russo – who trained at FUC Buenos Aires – blends documentary elements with fictional narrative, which the director has said is inspired by French director Robert Bresson.

The La Paz-born filmmaker added that his films also draw on  the stories of friends whom he has filmed over the years; and they tend to follow on from one another: None of his cast are professional actors and Ticona also features in “Dark Skull” as the same character.

According to Russo, the genesis for his sophomore feature centers on documentary footage of a protest march that he shot of Huanuni workers in 2018.

It features Ticona and his friends – who are all children of miners  – arriving in La Paz, along with dozens of other young workers, to ask for jobs in the mines.

They were unsuccessful and the resulting protest is the springboard for “El Gran Movimiento” as the opening scenes features workers from the mines chanting “Miners’ blood! Fighters’ heart!”

The trailer introduces us to the strange and rugged topography of La Paz – which Russo has referred to as the film’s third character.

It also features witchdoctor Max in a trance-like state underneath a tree, enveloped in birdsong and the unidentified organic sound of movement, sliding or the dislodging of something.

We are then introduced to feverish mine worker Elder as he struggles to breathe. His friends talk of how he has swallowed “a shitload of dust” and in later scenes it becomes clear that Elder’s work in La Paz is worsening his condition as he struggles with heavy crates and great sack-loads of vegetables for delivery to the local market.

Reality then blends in with elements of the fantastic as his illness mystifies an older local Mama Pancha (Francisca Arce de Aro) enough to refer Elder to the witchdoctor, Max, who suspects demonic possession. Can Max save him?

As an allegory of a city’s debilitating effect on its workers, some of whom are the director’s own friends – Russo has commented:

“[This film] is freely inspired by their lives. I imagine this story of illness and healing to take us into the heart of the social fabric of this city and reveal the lives of its invisibles.”

The Super 16mm shot film is also bound for the U.S. later this month, making its North American premier at the New York Film Festival.

“El Gran Movimiento” is produced by La Paz-based Bolivian production outfit Socavón Cine, which worked on the director’s first film, “Dark Skull,” that went on to represent Bolivia in the Oscar race) and Paris-based Altamar Film.