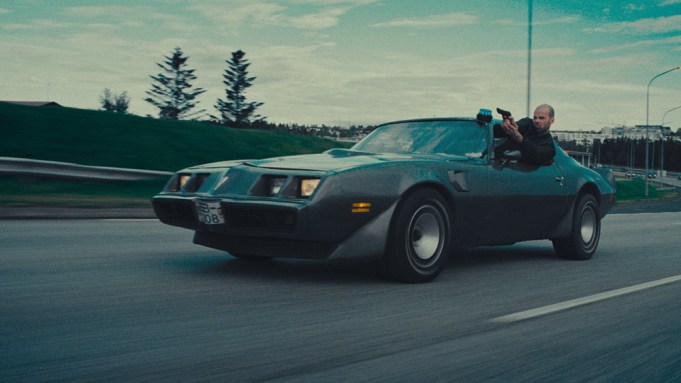 The movie tips its hat to ‘80s and ‘90s buddy cop action classics  in its action set-ups, characters and shots – as when the camera swoops over blue Icelandic water to a rather bathetic non-“Miami Vice” skyline at the get-go.

“Cop Secret” is not, however, popcorn escapism. It turns on Bussi, a tough “supercop” played by Audunn Blöndal (“The Garden”), who shoots people and destroys stuff, “Bad Boys”-style.

But when Bussi assigned a new partner – the suave, cultured and self-declaredly pan-sexual Hordur Bess, played by “Black’s Game’s” Egill Einarsson –  he begins an inner struggle with his true sexuality.

“The idea is to make an action comedy that is not afraid of mimicking Hollywood action clichés, a film that has never been done before in Iceland,” says “Cop Secret” co-writer and director Hannes Þór Halldórsson.
He added: “We will have gunfights, one-liner phrases and exaggerated fights. I am convinced that ‘Cop Secret’ will be a movie that will be cool, original, exciting and explosive.”

For the most part, draped in a soundtrack featuring a remix of popular Icelandic pop song “Hjálpaðu mér upp,” the trailer focuses on “Cop Secret’s” plot, Bussi’s sentiments and action.

The latter is sometimes violent and most often expeditious – as thieves, led by Rikki, a soft-spoken psychopath and former model, break into three Reykjavík banks but steal nothing, apparently.

That’s somehow connected to a bomb at a soccer stadium.

That could be seen as a nod to Halldórsson’s other calling, beyond TV series and commercials direction, as a professional soccer goalkeeper, best known for turning away a penalty kick by Lionel Messi in a 2018 soccer World Cup match between Iceland and Argentina.