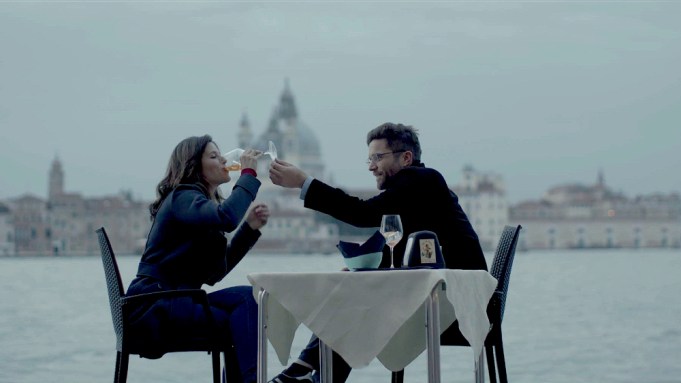 In a bid to explore new avenues of distribution, Colombian-German-Italian co-production “When in Venice,” by Colombian director-producer Juan Zapata of Zapata Filmes, will bow simultaneously May 13 in theaters in at least eight countries and be available worldwide on VOD and TVOD platforms.

Shot completely in pre-pandemic Venice in 2018, the sight of mask-free crowds, of people embracing, shaking hands and nuzzling, is disorienting at first.

“When in Venice” is a love letter to the iconic Italian city as well as the story of two strangers who make a pact to visit the city together, albeit with some rather odd rules.

He’s Max, a German businessman (Peter Ketnath) in the middle of breaking up with his girlfriend and she’s Maria, a Brazilian pastry chef (Bellatrix Serra) doing research.

In the trailer that Zapata Filmes bows exclusively with Variety, Max and Maria meet at a bar and while on the train ride to Venice, they set up some rules that includes no hand-holding, no selfies, no meat and no kisses. As they traipse through the magical city, their initial reserve gradually thaws.

“This pandemic, the greatest crisis of our generation, has forced us to be more creative and to strive harder for a successful commercial circuit,” said Zapata, who added: “This is a film that seeks to form a dialogue with the public: it is light and sensitive, it allows us to travel to a different kind of Venice, far from the tourist clichés, and discover these unusual characters, Max and María.”

“The final ‘Zapata Cut’ will be in cinemas but technological advances now allow us to give the viewer the ability to choose their preferred ending,” he explained.

“Everyone has fully committed to this key strategic alliance, forged during these difficult times, which includes such renowned companies as Tondero Distribución, Latinópolis, No.Mad entertainment, Procinal, and Fortes Filmes who have agreed to theatrically release the film in Colombia, Brazil, Peru, Mexico, Chile, Bolivia, Ecuador and Uruguay,” said producer Douglas Limbach.

“When in Venice” is a co-production of Zapata Filmes, which has offices in Brazil, Colombia and the U.S., Germany’s Cinezebra and Italian digital marketing agency Black Soda.

The film was backed by private investors and had the official support of Japanese multinational, Canon. Barring any new pandemic-related lockdowns, the May 13 launch of “When in Venice” will set the stage for an alternative distribution model for Latin America.