Chile’s ‘The Shape of Fear’ Takes on the Croisette, Drops Trailer (EXCLUSIVE) 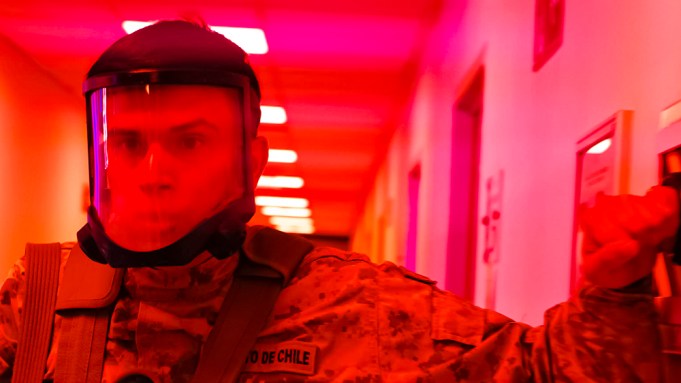 Chilean horror maestro Jorge Olguin and his producers will be at Cannes’ Marché du Film and Producers Network to seek international co-producers and distributors for his upcoming sci-fi horror film “The Shape of Fear” (“La Forma del Miedo”), described as a cross between “The Andromeda Strain” and “The Thing.”

Its teaser trailer, unveiled exclusively in Variety, opens with a panning shot of Chile’s stunning Atacama Desert as a mysterious white light streaks across the sky to the tune of Beethoven’s Symphony No. 7, which has never sounded more sinister. We close in on a military hospital as a bloodied woman writhing in pain is rushed in on a stretcher. A lab scientist, played by Mayte Rodriguez (“Distancia,” “Feroz”), studies the patient’s blood sample under a microscope and alarmed at what she sees, urges everyone to put on their masks. Blood splatters, people are stabbed and more horror ensues.

Olguín, who also wrote the screenplay and composed the soundtrack of the film, noted: “Without a doubt, the feeling of fragility that we experience with this new disease (COVID-19) and the social changes that are emerging in the world as a result, inspired me to write this film.”

“To achieve this analogy, I placed the story in the dreamlike   environment of the Atacama Desert where architecture and science appear fragile and vulnerable in the midst of an imposing landscape where nature can be ruthless with humans and their technology,” he said, adding: “All this takes place during a cosmic phenomenon that will forever alter the world we know.”

“The hospital where our protagonist works will be ‘the ship,’ which under the starry night skies of the Atacama Desert, will see her confront this unknown microscopic antagonist who will shatter all her scientific and rational preconceptions,” he told Variety.

Olguín is considered a pioneer of the fantasy and horror genre in Chile. He made his debut as a feature film director with “Ángel Negro” (2000), made when he was still a university student. The film became a box office success in Chile and was credited as the first Chilean horror film. He was also the first to delve into the zombie genre with “Solos” which Lionsgate released on DVD in the U.S. under the title, “Descendents.” His pioneering spirit continued with the first Chilean fiction film in 3D “Gritos del Bosque” (2014), a horror-fantasy film inspired by Chilean mythology. Then he co-produced and directed “Cuenta la Leyenda” (2017), an animated series of horror stories for children, which became a YouTube phenomenon. His latest film “La Casa,” produced in 2019, is inspired by real events about one of the houses with the most paranormal cases in Chile. It premiered at the 2019 Mar del Plata Film Festival and at Sitges the following year and was picked up by the North American company, Epic Pictures.

foster via its long-term collaboration pact, sealed in 2019, with Mexican horror festival Morbido. The partnership will see Morbido

representatives, led by its founder and CEO Pablo Guisa, attend the Sanfic industry section each year to help in the promotion of horror projects and provide counsel on submitted projects.

“The Shape of Fear” is produced by Carol Campos of Atacama Films. Chris Sablan of Avenue 220 and Patricio Ochoa of La Merced Prods. serve as executive producers.

The project is in pre-production and expects to premiere in 2022. Its teaser trailer will soon be made available on Cinando.