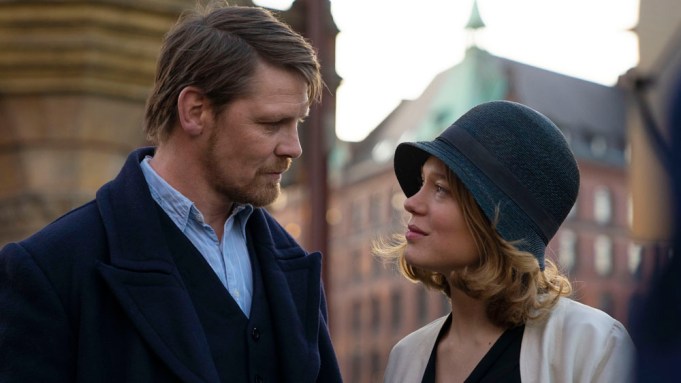 Variety has been given exclusive access to the trailer for “The Story of My Wife,” which screens in competition at Cannes Festival. Oscar-nominated director Ildikó Enyedi’s film stars Palme d’Or winner Léa Seydoux. Films Boutique is handling world sales rights.

Enyedi’s “On Body and Soul” won the Golden Bear at Berlin in 2017 and was Oscar nominated the following year. Seydoux won Cannes’ Palme d’Or, alongside director Abdellatif Kechiche and co-star Adèle Exarchopoulos, for “Blue Is the Warmest Color” in 2013.

Also in the cast are Gijs Naber (“How to Avoid Everything”), Louis Garrel (“Redoubtable”), Josef Hader (“Stefan Zweig: Farewell to Europe”), Sergio Rubini (“The Stuff of Dreams”) and Jasmine Trinca (“Honey”).

“The Story of My Wife” is an adaptation of Milan Fust’s 1942 novel of the same name. The story, a variation of the legend of the Flying Dutchman, is set in the 1920s. In it sea captain Jakob Storr makes a bet in a cafe with a friend that he will marry the first woman who enters the place, and then in walks Lizzy. Fust’s novel was first published in Hungary in 1942, but only translated into English in the late 1980s, when it became a literary sensation.

Enyedi’s first English-language feature re-teams the director with her “On Body and Soul” producers Monika Mecs, Ernö Mesterházy and András Muhi of Hungary’s Inforg-M&M Film. Berlin-based Komplizen Film, the producer of Oscar-nominated “Toni Erdmann,” is a co-producer, alongside Italy’s Palosanto Films, in association with France’s Pyramide Productions. The film is supported by the Hungarian Film Institute, Italy’s Ministry of Culture, Eurimages, RAI Cinema and Arte, among others.

Speaking to Variety during the film’s production, Enyedi explained why she had wanted to adapt Fust’s book. “As an only child I was a bookish girl and one of the decisive moments of my teenage years was my meeting with this novel,” she said. “It speaks with disarming sincerity and sometimes frightening lucidity about our human flaws and, at the same time treats its imperfect, failing heroes with immense tenderness. A rare combination.”

Referring to the contemporary resonances of the story, Enyedi said: “This film is a love letter to all the wonderfully imperfect men – to the loves of our life, written by a woman director. When I was a kid the male attribute I envied the most was chivalry. I would like to permit myself now to be chivalrous. I would like to add a gentle touch to the general discussion of today about communication between the sexes. I am so glad that through some longtime closed and now opened windows fresh air is pouring in, that our social habits are changing for the better. Let’s do it with more kindness and more humor – it will not be less effective but it will definitely be more fun for all of us.”