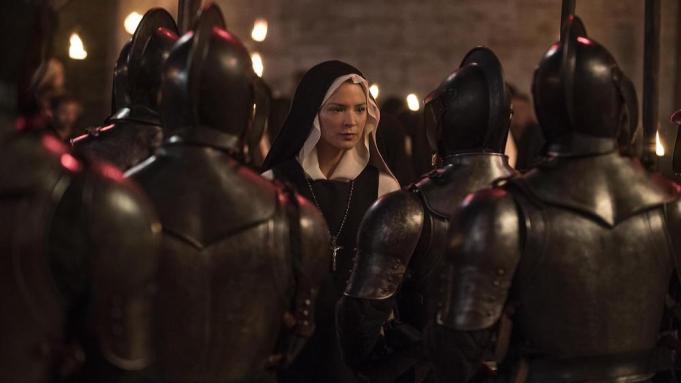 Pathe International has unveiled the poster and trailer for Paul Verhoeven’s subversive period thriller “Benedetta.” Cannes also confirmed that the film will world premiere at this year’s festival on July 9 and will be released in French theaters on the same day.

Inspired by true events, “Benedetta” is set in the late 15th century and stars Virginie Efira as Benedetta Carlini, a novice nun who joins the convent in Pescia, Tuscany. Capable from an early age of performing miracles, Benedetta’s impact on life in the community is immediate. But when her affair with another nun is discovered, it causes a scandal and leads Benedetta on a dangerous path. (Check out the film’s poster below.)

Charlotte Rampling, Daphné Patakia, Lambert Wilson and Olivier Rabourdin round out the cast.

“Benedetta” marks Verhoeven’s follow up to “Elle” which competed at Cannes in 2016, was nominated for an Oscar and earned its star Isabelle Huppert a Golden Globe for best actress.

“Benedetta” is produced by Said Ben Said at SBS Productions who had also produced “Elle.” Pathé is handling international sales and will distribute “Benedetta” in France. The movie was expected to be part of last year’s official selection but the filmmaker and producer decided to hold it to this year after the festival canceled its physical edition.

The Cannes Film Festival will unveil its Official Selection on May 27. The festival is set to kick off July 6 with the world premiere of Leos Carax’s “Annette,” a musical romance with Adam Driver and Marion Cotillard. The film’s distributor, UGC, will also release the movie in France on the same day as its Cannes unspooling.