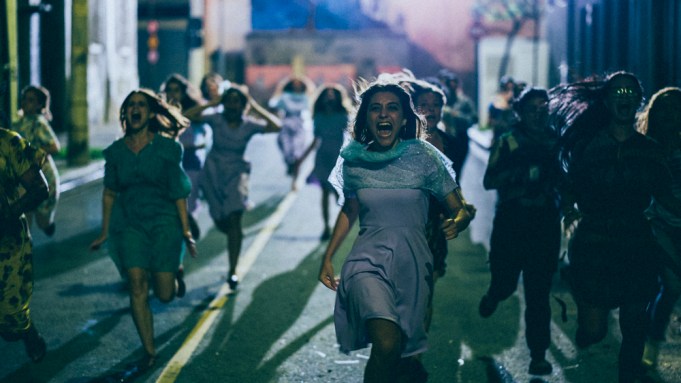 The drama, set in contemporary Brazil, centers on 21-year-old Mariana, who belongs to a world where she must do her utmost to keep up the appearance of a perfect woman. In order to resist temptation, she and her girlfriends try their best to control everything and everyone around them, including those they see as sinners. At night, their girl squad put on masks, hunt and beat up women who they believe have deviated from the righteous path.

Her first feature “Mate-Me Por Favor” (Kill Me Please) (2015) was screened in the Orizzonti section at Venice Film Festival, New Directors/New Films and SXSW. “Medusa” is her second feature film.

Wayna Pitch’s Jonathan Musset told Variety the company has been following Rocha da Silveira for several years, having released her first feature, “Kill Me Please,” in France in 2017. Describing that film as “visually awesome,” Musset said it felt “like a crush for me,” and reflected the company’s identity. “When we saw it, we knew that it was the kind of cinema that we wanted to share with the audience,” he said.

“Medusa” is even stronger than the first film, he said. “Anita wrote a very intelligent and political story that will touch every woman.”

Musset said that the director approaches her films like a “concert experience.” He added: “She allows people to really feel the mood of the movie with very pop editing choices, and there is a climax like in a concert.”

Wayna Pitch has an ambitious release plan for the film, with 100-150 copies, and will target a young audience, mostly women.

Its lineup is mostly composed of films from young directors “who talk about their time, their generation, with a freshness that sometimes leads them to mix genres and explore new storytelling forms,” he said.

Other films on its slate include Luciana Mazeto and Vinícius Lopes’ “Irma,” which played in Berlinale’s Generation section, Emanuele Geroza’s “One More Jump,” Caru Alves de Souza’s “Je m’appelle Bagdad,” another Berlinale’s Generation title, Ramon and Silvan Zürcher’s “The Girl and the Spider,” which was in Berlin’s Encounters section, and Hadas Ben Aroya’s “All Eyes Off Me,” which was in Berlin Panorama.