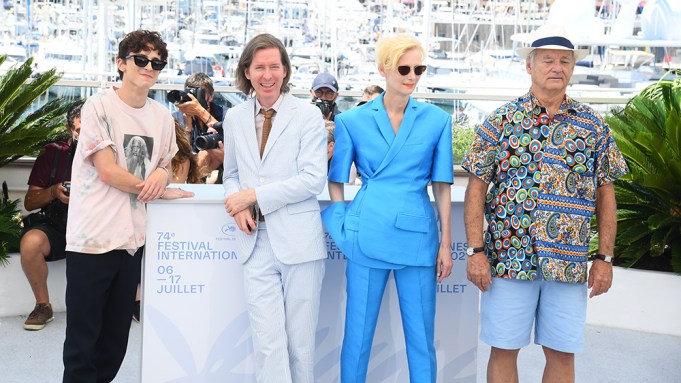 Bill Murray is among the cast of Wes Anderson’s new film that will begin production in Spain in August, Variety has learned.

Sources close to the project have confirmed Murray’s casting. The actor has appeared in nine of Anderson’s movies to date, excluding the new pic.

The as-yet-untitled film also stars Tilda Swinton, as she revealed exclusively to Variety in June. Though the film is shooting in Spain, “it’s not about Spain,” Swinton had hinted. Meanwhile Anderson had said he’s “not ready to share any details” about the new film.

Murray and Swinton co-star in Anderson’s “The French Dispatch,” which recently had its world premiere at the Cannes Film Festival.

Murray is an old Anderson hand. Besides the Spain project and “The French Dispatch,” the duo have also worked together on “Isle of Dogs,” “The Grand Budapest Hotel,” “Moonrise Kingdom,” “Fantastic Mr. Fox,” “The Darjeeling Limited,” “The Life Aquatic with Steve Zissou,” “The Royal Tenenbaums” and “Rushmore.”

Murray has another film at Cannes: music documentary “New Worlds: The Cradle of Civilization.” In the documentary, shot on stage at the historic Acropolis in Athens, Greece, in 2018, Murray joins famous cellist Jan Vogler on stage for a night of timeless poetry and music, captured on film by director Andrew Muscato (“Mooch”).

Spanning from Bach to Van Morrison, Walt Whitman to “West Side Story,” “New Worlds: The Cradle of Civilization” showcases the range of art that has influenced American and European culture and helped to bridge the gap between the two. It captures the final performance of Murray and Vogler’s European “New Worlds” tour. Murray also serves as a producer on the film.

Preston Northrop contributed to this story.