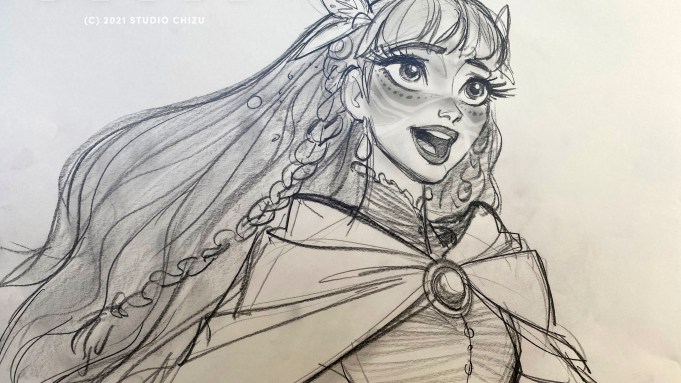 Mamoru Hosoda, the Oscar-nominated director of “Mirai,” has attracted a prestigious international creative team for his anticipated music-filled film, “Belle,” whose first trailer is being unveiled by Studio Chizu. On top of revealing exclusive new images, the trailer also features the very first track of the film.

Mixing reality and fantasy, “Belle” follows Suzu, a 17-year-old high school student living in a rural village with her father. For years she has only been a shadow of herself. One day, she enters “U,” a virtual world of 5 billion members on the Internet. There, she is not Suzu anymore but Belle, a world-famous singer. She soon meets with a mysterious creature. Together, they embark on a journey of adventures, challenges and love, in their quest of becoming who they truly are.

Among the top-notch creatives who have joined “Belle” is Jin Kim, the character designer of several iconic Disney movies, from “Frozen” to “Tangled,” “Big Hero 6” and “Moana.” Kim, who created the character design of “Belle,” met Hosoda in Los Angeles when the Japanese helmer was in town for the 2019 Oscar ceremony (when “Mirai” was nominated). “Belle” will mark the first collaboration between Hosoda and Kim, who admire each other’s work.

Also joining “Belle” is Eric Wong, an up-and-coming British architect and designer who created the concept art for the sprawling digital community of the world of U, based on Hosoda’s design.

The internationally driven feature has also lured veteran animation players Tomm Moore and Ross Stewart from Cartoon Saloon, an Irish animation studio behind the Oscar-nominated “Song of the Sea” and “The Secret of Kells,” and “Wolfwalkers,” nominated at this year’s Oscars.

“Belle” is Hosoda’s ninth feature. His previous film, “Mirai,” world premiered at Cannes’ Directors Fortnight in 2018 before earning an Oscar and Golden Globe nomination, as well as winning the Annie Award for best independent animated feature. The helmer has tackled the impact of technology on our lives before, notably on “Summer Wars” and also directed “Digimon: The Movie – Digimon Adventure: Children’s War Game!”

“’Belle’ is the movie that I have always wanted to create and I am only able to make this film a reality because of the culmination of my past works,” Hosoda previously said about the film. “I explore romance, action and suspense on the one hand, and deeper themes such as life and death on the other. I expect this to be a big entertainment spectacle.”

“Belle” is the second collaboration between Studio Chizu and Charades. Charades’ co-founder Yohann Comte forged a relationship with Hosoda on the film “The Boy and the Beast,” which he sold internationally while working at Gaumont.