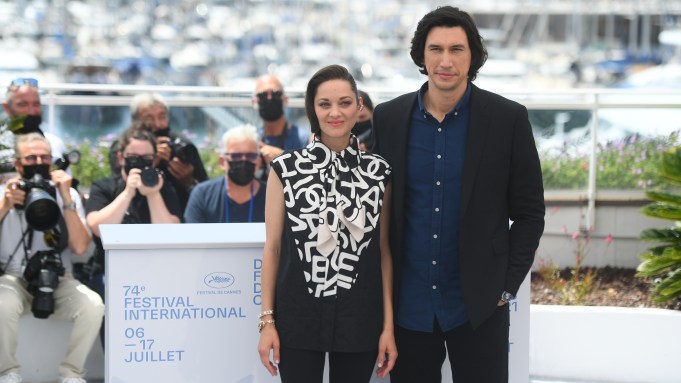 The stars of Cannes Film Festival opener “Annette” opened up on Wednesday about the demands of making Leos Carax’s rock opera and the film’s parallels with the real-life demands of fame.

Launching the festival on Tuesday night, “Annette” was met with mixed reception. The musical — about two star-crossed artists who give birth to a baby girl, Annette (who is largely portrayed by various dolls), and whose lives are chronicled by the paparazzi — is in no way conventional and chock full of melancholy songs that were sung live by stars Adam Driver and Marion Cotillard during filming.

Hundreds of people left the screening halfway through, but that didn’t stop the film from getting a five-minute standing ovation, during which the “Holy Motors” director lit up a cigarette he shared with Driver.

The actor, who also executive produced the film, was absent from the Wednesday press conference. While a Cannes rep chalked it down to “scheduling issues” when asked, Variety understands the star left town immediately after the opening night premiere — even skipping the dinner — to get back to shooting Noah Baumbach’s “White Noise” opposite Greta Gerwig. The movie is filming in Ohio.

Cotillard spoke candidly of her own experiences with fame when asked about the movie’s commentary on the incredible pressures of celebrity.

“I have the experience of being recognized but the need is still in me,” admitted Cotillard. “It’s been a big question in my personal life: why do we need to be looked at, heard, loved, by so many people we don’t even know? And how it can build your confidence in a way, but also how it can destroy you, especially when you don’t have enough love for yourself.

“To have this mirror of so many people loving you, it can put you in a situation where it doesn’t fit and it’s not logical. And then it can destroy you even more, and we’ve seen so many celebrities going down because the picture, there’s something wrong with that,” added Cotillard.

The actor, who won an Oscar in 2008 for her turn as singer Edith Piaf in the biopic “La Vie en Rose,” also discussed the demands of live singing during the production.

“Usually when you sing and do a musical, you record the songs in the studio and you lip synch on set. There, it was live, so it means that the sound of the singing would be changed by every movement of the body and we have a lot of action live singing. I trained to sing while moving a lot, like running, walking and bending,” she said.

“Singing as though you’re smoking, you can’t imagine how hard it is,” Cotillard later added. The actor, along with co-star Simon Helberg (“The Big Bang Theory”), joked about Carax’s occasionally draconian demands of the actors.

“You never knew what the day would look like,” laughed Cotillard. “You’d be like, ‘Today, I don’t see how it’s going to be difficult,’ and suddenly you’re in 30-centimetre heels, and you’re on a [narrow] path and singing. Actually, that’s the only time I said I couldn’t do it, because I thought I would fall and break my leg.”

Helberg added: “Leos would ask me to do certain things that were just impossible physically sometimes. Like lift your hand off the piano and then lift the other hand. ‘So you want me to play the piano with no hands?’

Before leaving the press conference abruptly by declaring “I need to piss, I’ll be back,” Carax also explained his decision to use various dolls to portray the couple’s child in the movie, Annette.

“[I said] no to animatronics, CG, virtual whatever. And then you’re left with a puppet,” said the director.

“I met two young puppeteers in France and they made the film possible. I had tried puppets in LA and Tokyo, but I could never see Annette. It was only with these young people in France that I began to see it was possible. Because I wanted to see [Annette] on the shoot, in the arms of the actors. I wanted to see her and protect her. We couldn’t add her in post production or anything.”