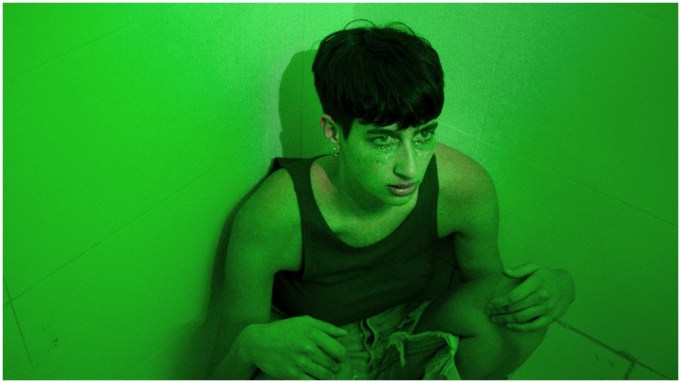 Brussels-based Best Friend Forever Sales has given Variety exclusive access to the international trailer for Berlin Panorama player “All Eyes Off Me,” the sexually charged sophomore outing of actor-director Hadas Ben Aroya.

Told in three distinct yet related chapters, the film begins at a party in Tel Aviv where young Danny is trying to find Max to let him know that she’s pregnant with his child. Max, however, has other things on his mind and is with his new girlfriend, trying to live up to her violent sexual fantasies for the two of them. She wants to be hit and choked, which leaves her bruised when she visits an older man for whom she dog sits.

In the trailer, all three scenarios are represented in microcosm. backed by pounding dance beats and colored with flashing lights, we find out that Danny is planning, or at least claims to be planning, on getting an abortion, but wants to let Max know first. Later, under the light of day, Max is speaking with his girlfriend Avishag, who assures him that she’d rather he choked her too hard than do a half-assed job. Finally, a more subtle Avishag can be seen having a friendly chat with her patron, trying to find out why he keeps a portrait of a dead dog in his bedroom.

“This is a movie about intimacy,” explains Ben Aroya. “Intimacy is not when people are naked, having sex, or expose their dark secrets. Intimacy comes when you manage to be vulnerable in front of another person. That’s it. It is only when you are vulnerable that you can truly feel. That’s the absurd, the film’s heroes want to feel something so much, but can’t show vulnerability. Can’t reach intimacy. In my opinion that is the essence of the rat race of my generation.”

In addition to writing and directing, Ben Aroya co-produces with Maayan Eden. Best Friend Forever Sales is handling worldwide sales and representing the movie at the European Film Market out of its virtual booth, along with Ayten Amin’s “Souad,” playing in Panorama; Lenny and Harpo Guit’s “Mother Schmuckers,” part of Sundance at EFM; and two titles screening in the Virtual Cinema in Hubert Viel’s “Louloute” and Pascal Tagnati’s “Icomete – A Corsican Summer.”