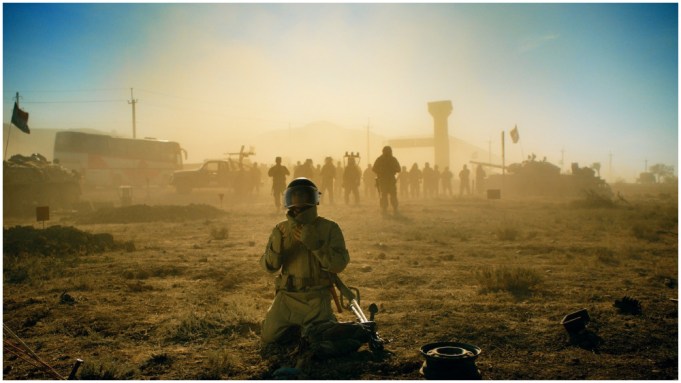 Rock Films, the production house founded by veteran Russian director Alexey Uchitel, has shared the first teaser for its forthcoming Syrian war drama “Palmyra” with Variety. The company is presenting the film this week during the Key Buyers Event.

“Palmyra” follows a Syrian Explosive Ordnance Disposal (EOD) team targeted by ISIS militants, while they prepare the recently liberated historic site of Palmyra to hold a symbolic concert of the Mariinsky Symphony Orchestra. The EOD team clears the way one mile at a time. But the closer they get to the center of Palmyra, the more destructive the explosives become.

The film is currently in post-production and slated for a 2022 release.

“Everybody has heard of the shocking destruction in the Syrian city of Palmyra that was one of the most important cultural centers of the ancient world,” said Uchitel. “It was part of ISIS’s ongoing campaign against archaeology. Leaving the city, the military group left numerous hidden explosives, and the protagonists of our story are there to clear the site, step by step, risking their lives.”

Director Andrey Kravchuk said he was moved from the moment he had the script in his hands, describing “Palmyra” as a story that was “just begging for the big screen.”

“Central to the story was an engaging, even a standout character, who had come a long way from certain seclusion, focused on his own passions and problems, to almost Christian-like self-sacrifice to save his colleague (and a rival),” he said. “I hope that the film will surprise the viewers not only with special effects and production value, but also with an incredible human story.”

“Palmyra” is produced by Rock Films and supported by Russia’s Cinema Fund, which came on board in the early development stage. Russian VOD platform Premier is also attached to the project. Riverlet Films is handling international sales.

Riverlet’s Olga Ailarova described the film as a “powerful and universal story of modern people [facing] the realities of war, and the impact it has on them.” Drawing comparisons to “The Hurt Locker” and “American Sniper,” she added, “We have been getting a lot of interest (and some firm offers) from international buyers from the early stage of pre-production, and we are very excited to be able to share the first market promo of the film at KBE.”

“Zemun” is a debut feature film from young writer-director Eduard Zholnin. The story centers on two brothers whose conflict echoes the biblical story of Cain and Abel. Pic is in post-production and will be released in winter 2021.

The fantasy film “The Flying Ship” is based on Russian folklore, and will be directed by Ilya Uchitel, with top Russian actors attached. The film is now in pre-production and will begin shooting at the end of summer 2021.

“Shostakovich” is an ambitious biopic based on the little-known true story of the genius composer, directed by Alexey Uchitel. Rock Films has attached a U.K. co-production partner and is aiming for an A-list actor for the lead role.

“Gorbachev” is an upcoming series based on the life, love and struggles of the Russian statesman who changed the course of 20th-century history. Pic is currently in the development stage.

Uchitel, whose controversial 2017 period drama “Mathilde” provoked the ire of religious and nationalist groups in Russia, said Rock Films looks “to find the right balance between awards-winning motion pictures that cause a public stir and commercial films that become box office hits.”

The company also launched into episodic series with the 2019 release of “Coronation,” a miniseries based on “Mathilde,” which was released on the Russian streaming service Amediateka. Up next is “Plevako,” a 10-episode period drama about the legendary Russian lawyer Fedor Plevako, featuring Russian star Alexander Petrov. The series, which begins shooting in September 2021, will be co-produced with leading Russian VOD service Premier.

“At the moment, both the studio and me personally are actively engaged with a number of platforms, negotiating a few large projects at the same time,” said Uchitel. “I am certain that we’ll be announcing several distinct series in the near future.”