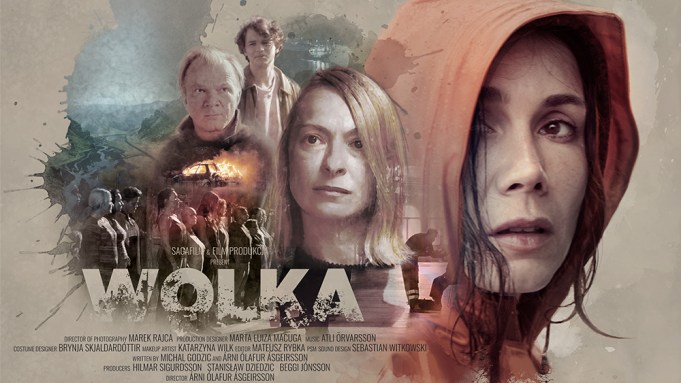 The feature will bow as a market premiere at Haugesund’s New Nordic Films, Scandinavia’s major film showcase which runs Aug. 24-27.

The atmospheric trailer follows Anna (Olga Bołądź) as she gets out of a Polish jail on parole after 15 years behind bars. She soon travels from Warsaw to Iceland, on the tail of a mysterious Dorota (Anna Moskal) who has blended into the nation’s largest ethnic minority. Composer Atli Örvarsson (“Rams”, Netflix’s “Eurovision Song Context-The Story of Fire Saga“) and cinematographer Marek Rajca (“South by North”) capture the escalating tension as Anna’s arrival rocks Dorota’s life, established under a false identity.

The images reveal the cultural challenges for the strong community of nearly 10,000 immigrant Poles living in Iceland, tagged by Dorota in the trailer as “the bloody end of the world’.

Shot in both Polish and Icelandic, the thriller was co-penned and helmed by Icelandic-born Árni Ólafur Ásgeirsson (“Ploey, You Never Fly Alone,” “Undercurrent”), who studied at Poland’s prestigious Lodz film school and experienced first-hand in Iceland the cultural clashes between the two worlds. The talented 49-year old helmer sadly died last April just after completing the pic, following a short illness.

“Árni Ólafur Ásgeirsson, whom we dearly miss, has managed to transport his true passion for filmmaking and endless energy to this unique film,” said Moritz Hemminger, The Playmaker Munich’s deputy head of sales & acquisitions.

“‘Wolka’ is a suspenseful, entertaining and slick thriller which takes its characters seriously and therefore also works on an emotional level, “ Hemminger added, saying he is pleased to unveil the full film to buyers from over the world at Haugesund, “a very prestigious and perfect launch platform for the film’s international, festival and distribution career.”

“It is very special to finally release ‘Wolka’ to the world, especially in the light of Árni Óli passing away so suddenly and sadly last spring,” Sagafilm CEO and producer Hilmar Sigurðsson said in a similar heartfelt comment.

He also detailed the special bond he had had with Ásgeirsson. “Árni and I met for the first time in Haugesund in 2006 when he was following his first feature film ‘Thicker than Water.’”

“We returned years later as a producer-director team with ‘Ploey’ as a work in progress and…what a trip to remember!” Sigurðsson recollected.

“On top of the many adventures we experienced in Haugesund, Árni pitched me his story of ‘Wolka,’ which resulted in this first minority language film ever produced in Iceland. It’s therefore only appropriate that the first International screenings of ‘Wolka’ should take place at Haugesund.”

Co-produced by Human Ark and Sound Making, the thriller is backed by the Icelandic Film Center and the Polish Film Institute. It opened last May in Poland via Monolith, but has still to roll out in Iceland.

Sagafilm, in which Beta Film has a minority stake, will next launch domestically season two of its hit neo-noir “Stella Blómkvist” series, ordered by Nent Group’s Viaplay and local streamer Síminn.

More than 60 titles – between finished films, projects in development and those on post-production – will be showcased at Haugesund’s hybrid New Nordic Films confab, which runs parallel to Haugesund’s Norwegian International Film Festival (Aug. 21-27).