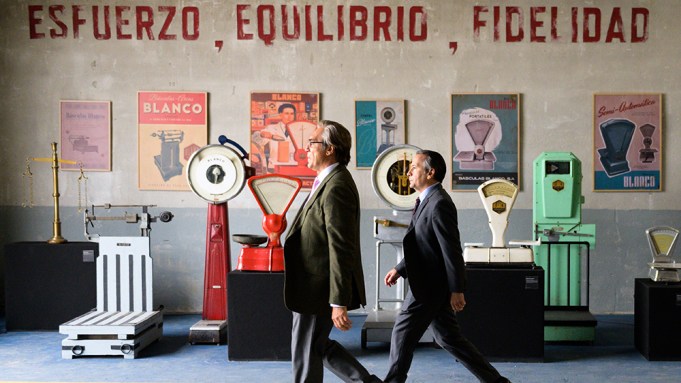 Variety has been given exclusive access to the international trailer for its San Sebastian world premiering workplace comedy “The Good Boss,” starring Javier Bardem and produced by Reposado P.C. and The Mediapro Studio.

Offbeat and ironic, Fernando León de Aranoa’s “The Good Boss” is one of this year’s most highly anticipated titles set to premiere at San Sebastián and was selected this week as one of three finalists for Spain’s International Feature Film Oscar submission. Buzz around the film has been building since it was announced two years ago, and with overwhelmingly positive word of mouth spreading after several Spanish press screenings, the film is sure to make an impact in competition at the Basque festival.

“The Good Boss” takes place in and around the Blancos Básculas factory, where all things must be in balance at all times. After all, they manufacture scales of all shapes and sizes. There, the seemingly benevolent boss, Bardem’s Blanco, is preparing his workforce for an upcoming inspection by a group visiting local businesses to select one for a prestigious prize.

Tensions begin to mount, however, when recently fired employee Jose shows up with his two children and begins making demands for the reinstatement of his employment. When Blanco’s management team refuses, the employee begins a one man crusade to discredit Blanco and prevent him from winning the much-coveted award.

In the trailer, we see the genesis of the conflict between Blanco and a disgruntled former employee who makes camp just outside the factory’s gates, importantly, on public property. We are also introduced to Miralles, a long-time friend and employee of Blanco’s whose personal problems are negatively affecting his work performance, giving an idea of how far Blanco is willing to go to support those close to him, but also the limit of his patience.

Blanco’s wandering eyes and sometimes poor decision making are similarly on display, as he is introduced to an attractive young intern who joins the factory’s marketing department. His incredible capabilities in staying calm under pressure are also demonstrated, with one or two teases of what happens when that calm finally breaks.

“The Good Boss” is produced by Reposado P.C. and The Mediapro Studio with participation from public broadcasters RTVE, TV3 and pay TV operator Orange. It will world premiere on Sept. 21 at the San Sebastian Film Festival before its Spanish theatrical premiere on Oct. 15, distributed by Tripictures.

MK2 is handling international distribution, and has already closed deals with BIM in Italy, Alamode in Germany and Austria, Cascade in the CIS and Baltics, and Spentzos in Greece.

Lorena Jaramillo contributed to this article.