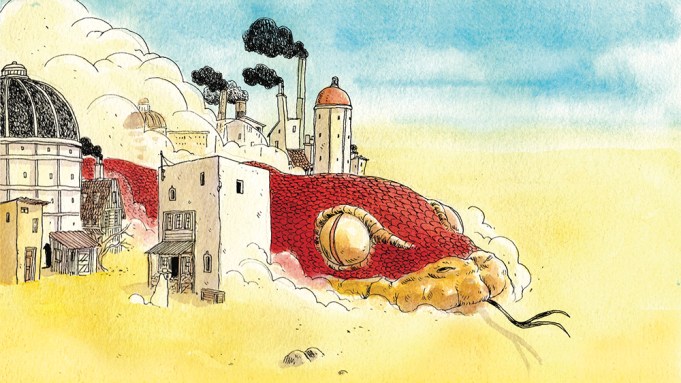 Autour de Minuit is joined in co-production by Belgium’s Panique on what will be Micault’s first feature length production. Her stop-motion short “Naïade,” co-directed with Lorenzo Nanni, won the Arte Award at Annecy’s MIFA market in 2008.

“Shadows” tracks the adventures of Uzu and Ada, two children following in the footsteps of their father who set out on his own looking for a better world. Thus a long journey begins for the two migrants who will run into a capitalist ogre, a snake-smuggler, treacherous sirens and a metallic fortress.

“I want to tell a timeless and universal story for children and parents. A story that affects us all and that we need to evolve,” Micault said.

“Shadows” is inspired by the eponymous French fantasy graphic novel written by Vincent Zabus and Vincent Tavier, and drawn by artist Hippolyte (Franck Meynet). The graphic novel is itself adapted from a Zabus theatre play and based on several migrants’ true stories.

Aimed at kids 7-years-old and upwards, the film targets a similar audience to that of Claude Barras’ “My Life as a Zucchini,” Schmerkin, explained, adding: “We want to tackle crucial contemporary topics –migration, exile, uprooting – at a children’s level, using fairy tale codes and music.”

Schmerkin pointed out that “Shadows” will feature a Miyazaki-esque graphic approach to backgrounds and some characters, in order to make this adventure as sensitive and universal as possible.

“I think it’s essential to tell this story to children as a political statement,” he explained.  “A strong, bold story with a gorgeous visual universe.”

The project will initiate production in 2022 and be ready for delivery in 2024.