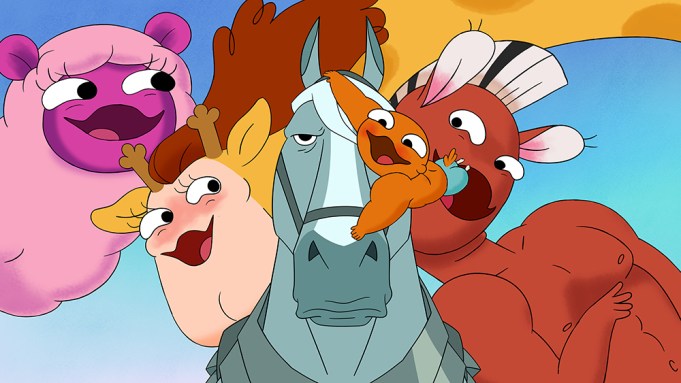 Netflix has revealed more artwork and clips from four of its kids and family animation titles, which are set drop this summer and fall.

During the streamer’s online Annecy session, introduced by Netflix director of character animation James Baxter, it was revealed that three of the titles – “Karma’s World,” “Vivo” and “Centaurworld” – are animated musicals, while all of them, including the Australian feature “Back to the Outback,” address themes of diversity, inclusion and both fitting in and celebrating differences.

First up was rapper and “Fast and Furious” actor Chris “Ludacris” Bridges 40-part series “Karma’s World” –a passion project that has been over a decade in the making, set to premiere this fall

The series, aimed at children from six to nine, is inspired by Bridges’ eldest daughter Karma’s experiences as a 10-year-old navigating her way through life and finding her voice.

Joining the Netflix presentation, Bridges revealed that one of his inspirations was the Disney series  “Doc McStuffins” and he made it his mission to track down its animators (Ireland’s Brown Bag Films] and convince them to take “Karma’s World” on.

The resulting visuals, according to the series lead writer, Halcyon Person (previously a comic writer for late night TV shows) are “ground breaking”.

Joining Bridges on the session, Person said: “ I was drawn in because I knew that so much has been invested in this project and it’s been done right which is a huge deal in this industry.

“We’ve had hours of meetings about skin tones and they have a beautiful range of skin tones to celebrate all types of characters and where they come from.  At every stage we pushed the envelope, we pushed what was possible.”

Bridges claimed that making the Brooklyn-set show’s world diverse and authentic as possible will also enhance its universal appeal.

“I’ve been able to tour the world as a rapper but even being in the “Fast and Furious” franchise and there’s so much inclusion in those movies and that’s what makes it so globally successful – and that’s what I took as a learning lesson for “Karma’s World”,” he said,

Another Netflix title also celebrates differences: the slithery and slimy vs. the cute and cuddly – although Australian features “Back to the Outback” turns this on its head.

Described by the film’s writer and director Harry Cripps as a “love letter to Australia’s diverse wildlife” it is a deadly snake, spider, lizard and scorpion who are the heroes of this animated adventure, while the cute and cuddly kola (voiced by Tim Minchin) becomes the spoilt and pampered bad guy.

During the presentation, Cripps explained: “the reptiles break out of a zoo in Sydney and they find their way across the country into the outback where they won’t be regarded as freaks or monsters – they can fit in and be themselves.”

As much as Netflix loved the idea and gave Cripps and co director Clare Knight their first opportunity to direct an animation – the duo revealed that the streamer had a hard time picturing a snake becoming the lead character in the film, and it was something that they both fought successfully to keep.

Says Knight: “Our snake Maddy has become the most beautiful, endearing snake which is a credit to character designer and Isla Fisher who voices the snake.

“Maddy is like a young teenage girl whose fangs are like braces and so she covers her mouth often because she’s embarrassed, people call her a monster, but she blossoms throughout the journey and everything she hates about herself become the things that saves everyone.”

Knight revealed that they are currently three weeks away from locking down the animation and will then move onto the lighting, the look and the sound.

Also on Netflix slate this summer is “Vivo” an animated movie that boasts new music from “Hamilton” creator Lin-Manuel Miranda.

Hailed as Sony Picture Animations first musical film, “Vivo” was originally intended for a theatrical release via Columbia Pictures in June, but the pandemic caused Sony to re-route to Netflix.

It tells the story of a Kinkajou (a rainforest honeybear, played by Miranda) who plays music in the squares of Havana with his beloved owner Andres. When tragedy strikes, the bear sets on a journey to Miami to reply in person to a letter sent to Andres from the famous diva Marta Sandoval (Gloria Estefan).

Director Kirk DeMicco (“The Croods”) joined the session with the film’s production designer Carlos Zaragoza to explain how music infused the animations every scene.

“I didn’t want it to feel like an animated comedy with some songs in it, I wanted it to be unapologetically musical throughout – the numbers become the structure and the tent poles of the film.

“We wanted every piece of the design to have this lyrical quality; from Carlos’ first drawings you can see that even the balconies in Andres’ building have musical notes.”

DeMicco added that inspirations for the animation’s look came from Caribbean postcards from the 50s and 60s as well as musicals from that time period.

The team even travelled to the locations and used consultants to observe street slang and activities, and the way people moved and talked in Havana as well as to take in the vibrancy and the colour of the streets.

DeMicco added that the film’s casting director also approached one of the founding members of the Buena Vista Social Club – Juan de Marcos González to voice Andres. “We skyped with him in Havana we sent him some pieces and he was intrigued by it and told us the story of how like he was like Vivo when he bought the old men from Cuba to America for the Buena Vista Social Club. He was someone who just lives and breathes music.”

Another Netflix animation with an unapologetically Broadway feel is  “Centaurworld” a 20-episode musical series by first time showrunner Megan Nicole Dong (“How to Train Your Dragon 2” ; “Pinky Malinky”).

“Centaurworld”  follows a war horse who is transported from her embattled world to a strange land inhabited by silly, singing centaurs of all species, shapes, and sizes.

According to Dong the story was inspired by her experience of growing up in an Asian American household in Southern California with serious academic aspirations, only to be thrown into a high school show choir by some quirk of her high school’s lesson scheduling.

“I was like a fish out of water with all this smiling face stuff and jazz hands but it changed my life in a positive way – I fell in love with musical theatre and pursued a career in the arts and embraced my creative side,” she says.

On the challenges of creating two very different settings for the show she added:  “The world where the horse comes from more of an action anime action setting while “Centaur world” is this huge colourful whimsical world. We wanted these words to feel distinct but also so that they could interact with each other.