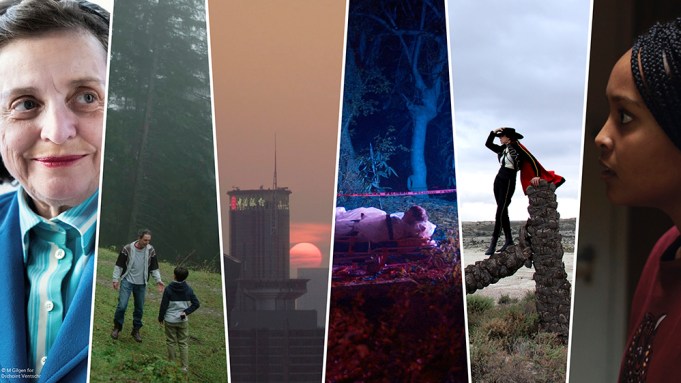 Sabine Gisiger’s “The Mies van der Rohes,” Steven Vit’s “My Old Man” and Caterina Mona’s “Semret” feature in this year’s pix-in-post showcase First Look, one of the industry highlights of the Locarno Film Festival, which focuses for the first time on movies from Switzerland.

Four of the six movies are first features, another a second; only Gisiger has a directorial career that stretches back several decades.

Presented by established production houses or producers such as Zurich’s Dschoint Ventschr Filmproduktion and Ticino’s Michele Pini, the titles also drill down, often in a highly personal fashion – two of the titles are autobiographical doc features – on questions of identity and finding a place in the world.

The features also dwell on different iterations of patriarchy, whether the egotism of male genius (“The Mies van der Rohes”), foraging multinational executives suddenly put out to pasture (“My Old Man”) or a father on a Quixotic miss to save his young son (“Reduit”).

“De Noche los Gatos Son Pardos,” (Valentin Merz, Switzerland)
Valentin, a film director, disappears half way through shooting a libertine costume drama. Robin, its DP and Valentin’s lover, travels to the shores of Mexico’s Pacific Ocean, fulfilling a promise he once made to Valentin, which is when “a new kind of romance begins,” the synopsis says. Merz’s second feature after the time and character-hopping “A Vulgar Adventure,” is set up at Zurich’s Andrea Film, founded by Merz and Marie Lanne-Chesnot in 2018.

“The Mies van der Rohes,” (Sabine Gisiger, Switzerland)
The latest from Dschoint Ventschr Filmproduktion which scored with IDFA 2020 winner “Radiograph of a Family” and 2018’s doc/fiction hybrid “Chris the Swiss.” Also the latest film from well-regarded Swiss docmaker Gisiger (“Welcome to Switzerland,” “Dürrenmatt a Love Story”). This doc feature turns not so much on iconic modernist architect Mies van der Rohes, but the women in his life – such as lover Lilly Reich – who, when van der Rohe escaped to the U.S. in 1938, were left to face up to Nazism on their own. Gisiger earned large plaudits delving into the realities of an icon in “Guru-Bhagwan, his Secretary and his Bodyguard.” This could be another exposé.

“My Old Man,” (Steven Vit, Switzerland)
A highlight at Visions du Reel’s Swiss Films Previews this April, Vit’s intimate but resonant doc feature turns the camera on the director’s own father Rudy, a dashing jet-setting executive, from his final business trip to when he is cut adrift, or so Rudy thinks, into retirement. Rudy, Vit told Swiss Films Andreas Bühlmann at the Previews, “represents a whole generation of men who led an old-fashioned way of life with his job as his central source of identity.” In one excerpt from the documentary, the director captures Rudy moping, purposeless. “When simply living your life is all you have to do, who do you choose to be?” Steven Vit asks in a voiceover. A probing portrait, produced by David Fonjallaz and Louis Mataré at Bern-based Lomotion.

“Reduit” (Leon Schwitter, Switzerland)
Schwitter’s first feature, an estranged father-son relationship drama set in the Swiss mountains as Michael tries to persuade son Benny, maybe 10, to join him in his retreat from a collapsing civilization. Or that’s how Michael sees it at least. An early project from Zurich startup shingle Exit Filmkollektiv, produced by Caroline Hepting, Rea Televantos and Schwitter for Exit and co-produced by Sabotage Filmkollektiv.

“Semret,” (Caterina Mona, Switzerland)
Produced by the indefatigable Michela Pini (“Love Me Tender”) a driving force on the film scene in Locarno’s local region of Ticino, “Semret” marks the feature debut of editor-turned-director Caterina Mona. The film portrays an Eritrean single mom who works at a Zurich hospital and aspires to become a midwife. To do so, however, she will have to face her past. Mona’s feature debut follows on 2015 short “Persi.”

“Las Toreras” (Jackie Brutsche, Switzerland)
Best-known for fronting punk garage band “The Jackets,” in “Las Toreras” Brutsche quizzes family members in Spain and Switzerland about the suicide of her Spanish mother in the 1980s. Confronted by multiple versions, secrets and lies, she at least realizes that her life has a lot to do with her mother’s dreams. Produced by Madeline Corbat at Bern’s Recycled TV, “Las Toreras” is co-produced by Cineworx Produktion in Basel and backed by public broadcaster RSI Radiotelevisione Svizzera.

Prizes take in the Cinegrell First Look award, worth SF50,000 ($54,500) for a film’s completion offered by Cinegrell, and new awards including free-of-charge advertising in Le Film Français; and the creation of an international poster, made by Kaiju Cinema Diffusion.

First Look 2021 is supported by Switzerland’s Federal Office of Culture/Media Desk Suisse and organized in partnersjhip with Swiss Films.