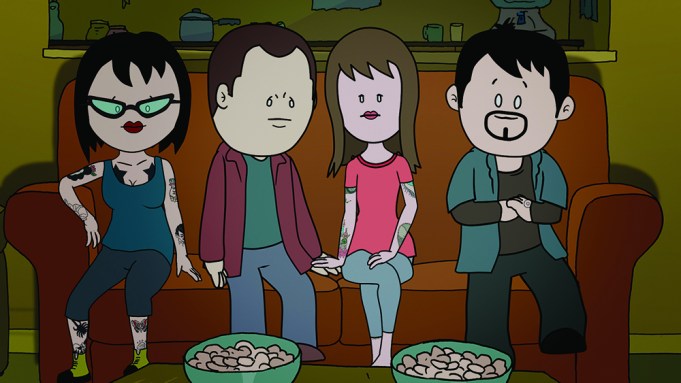 Giant cats, lasers, witches, violence and partial nudity fill the first English-language trailer for Crudo Film’s animated Argentine feature “Lava,” featuring the voice acting talents of Janeane Garofalo. Rock Salt Releasing, which is representing the over-the-top, end-of-the-world comedy thriller at this week’s EFM ahead of its March 15 premiere on major digital platforms, has given exclusive access to the trailer to Variety.

An outside-the-box hit at Annecy’s Contrechamp competition last summer, the film has since featured at several major international festivals including Argentina’s Mar Del Plata and Spain’s Sitges, where it screened in competition.

The near-future sci-fi satire follows Débora (Garofalo), a lonely and ineffectual tattoo artist, and her friends through the likely end of the world. One evening, several friends come over to watch the latest episode of “Gain of Clones” when suddenly the signal cuts out. Everyone in the room loses two minutes of time as they are brainwashed by a subliminal message broadcast over the screen.

Soon enough, the group learns that aliens have hijacked all forms of media, from mobile phones to cinema to the nightly news, and are using the screens to further hypnotize a device-addicted population. With humanity otherwise occupied, the men from space meet little and unprepared resistance when they invade in the forms of kaiju-sized cats and snakes or flame throwing witches. It’s up to Débora and her friends to learn how to resist the alien mind control and fight back to save Earth.

In the trailer, we get our first listen to the English-language voice cast as they are sucked into action and adventure that only adult-oriented animation can deliver. Débora and her tattooed millennial crew join together in a “Fellowship of the Ring”-style moment of bonding before embarking on their great adventure.

Both the English and Spanish-language versions of the film will be made available for purchase on March 15 on Amazon, InDemand, iTunes, Google Play, DirecTV, AT&T, Vimeo on Demand and Fandango. The Spanish-speaking viewers will recognize a similarly high level of voice acting talent for the film’s original version, including the likes of Sofía Gala Castiglione (“Alanis”), Martín Piroyansky (“April in New York”) and Justina Bustos (“Colonia”).