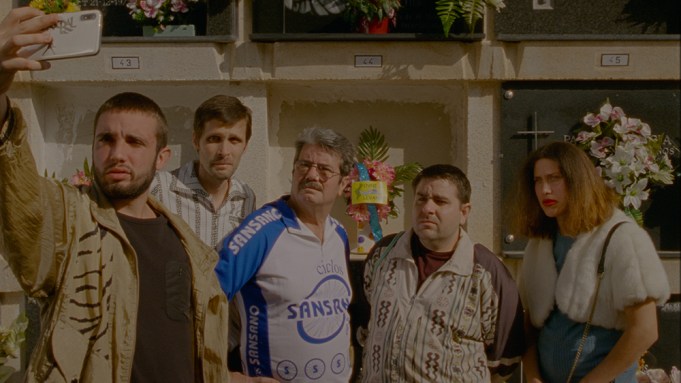 Its teaser trailer is launching exclusively in Variety.

Julio, their leader, dies unexpectedly, leaving José Manuel as the only person who knows about the cosmic secret that could change the future of humankind. Meanwhile, Spain searches for a girl who disappeared weeks ago.

“We are thrilled to be representing the debut of Chema García Ibarra, a fresh and talented voice, who will undoubtedly stand out in the new wave of films coming from Spain,” said  Ioanna Stais, head of sales and acquisitions at Athens-based Heretic.

“He delivers a film that builds an intriguing and mysterious narrative, which finds a way to punch you in the stomach when you least expect it. It is a visually stunning film, narrated in the most skillful and unexpected way,” she added.

Filmed on 16mm and 35mm, with Ion de Sosa (“Karen”) as cinematographer, and shot mainly in Carrús, Elche, Spain – the director’s own homeland – “Sacred Spirit” is performed by a non-pro cast led by Nacho Fernández, Llum Arques, Joanna Valverde and Rocío Ibáñez.

“We have always been convinced that Chema is a great European director. We are sure that [Locarno] will be the starting point of a long and successful international journey,” said La Fabrica Nocturna’s Perales and Rocher.

“After a quite easy and smooth production despite all the difficulties brought by the COVID, we couldn’t dream for a better spot to premiere the film,” they went on.

Jaibo Films’ Molina added: “[García Ibarra is] one of the most promising directors on the international panorama. The result is overwhelming: you cannot anticipate the unexpected.

The director’s short and medium-length works have been widely awarded at international festivals, taking in two honorable mentions at Sundance (“The Attack of the Robots from Nebula-5”, “Protoparticles”) and a nomination for the European Film Awards (“Mystery”).
Since 2015 he has taught an Anti-Filmmaking Course as part of the Documentary Cinema Diploma at the ECAM Madrid Film School.