Nikola and Corina Ilić on Their Family Doc ‘Dida,’ and Caring for a Parent Half a World Away 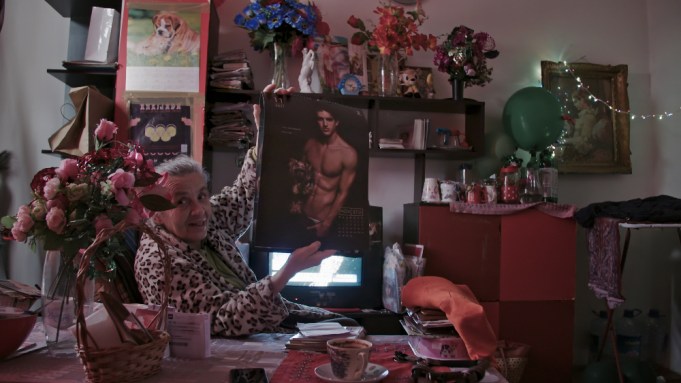 15 years after moving away from his home in Serbia, director Nikola Ilić settled down and found a girl in Switzerland, eventually marrying his wife and filmmaking partner Corina Schwingruber Ilić. Since then his life has been divided between two countries and three women, his wife, his mother Anđica (“Dida”) and grandmother Dobrila Spasić (“Baba”). Dida has learning disabilities and is reliant on her own aging mother Baba, who is increasingly incapable of providing the care needed.

Torn, Nikola began documenting his struggle between the two worlds, and his desires to ensure his mother is cared for while not giving up what he has built in Switzerland. It’s a story that so many immigrants have dealt with, exacerbated by his mother’s condition. However, while the Ilić family’s struggles are the core of the film’s narrative, “Dida,” world premiering in the Burning Lights competition at this year’s Visions du Reél festival, plays out as an uplifting and heartwarming tale about unconditional love, and a son trying to do right by the women who raised him.

Co-directed by the Ilićs, “Dida” is produced by Franziska Sonder and Karin Koch at A Dschoint Ventschr Filmprodukion in co-production with SRF, Schweizer Radio und Fernsehen and Urs Augstburger.

On the occasion of its premiere, the Ilićs spoke about their debut feature with Variety.

How did the work you’ve done in the past, mostly in short films, help you prepare this first feature?

Corina: Nikola, since his teenage days, would film anytime he got his hand on any camera. So, for granny and Dida it was entirely normal to be filmed.

Nikola: And Corina first filmed them while in film school back in 2009. So, they have always enjoyed being filmed.

When did you make the decision to take this story you’re living and put it on film?

Nikola: Nine years ago, Dida was diagnosed with cancer. At the time it didn’t look too good, so I decided to start talking and filming the family’s morning coffee and plum brandy routines, that they shared together, trying to figure out who my mother really was as a person, a person I was almost ashamed of while growing up. I wanted to film her before she would be gone forever. Then Corina had the idea to make a movie about the relationship between Baba and Dida and after several years of filming and developing the story, it was clear that my role in the family should be a part of the film as well.

How long did you work on “Dida,” both in development and eventually production? How long did editing take?

Corina: Nikola started filming back in 2012 and shot into 2020, so eight years of filming and exploring what kind of film it should be. For the past five years, our editor Myriam Flury would then go through the material. In the end, editing took around two years, divided into a few sessions. In total we shot between 150-200 hours of footage.

And how did you decide when it was time to get out the camera and shoot?

Nikola: That’s difficult to answer briefly… it was more a process of finding out what would be interesting. In the beginning we shot a lot but with time we became more focused.

And from that footage, how did you filter what made it into the film?

Corina: We watched all the material with our editor and would start picking parts we liked. It was important for us to have an outsider in Myriam so she could decide what we kept. Of course, it wasn’t easy as there we a lot of shots that meant a lot to us that had to be cut. That was really hard and, in some cases, it took loads of time and feedback from producers and test-watchers to find a decision we were all happy with.

When telling such a personal story, what kind of lines do you draw when it comes to showing private aspects of yours or your mothers’ experiences?

Nikola: We wanted to show the honest truth, but not to be too intimate, too uncomfortable for us, Dida or the audience.  So, we had to strike a balance in sharing our private life and showing our conflicts without parading Dida’s condition. We didn’t want it to be embarrassing. Our editor and producer, as well as test-audiences, helped us to find the right balance. We’ll see after the film releases if we managed it or not.

What’s next for you and for the film?

Both: We’re hoping to share the film with audiences and experience face-to-face encounters with them. And we can’t wait to show the movie to Dida in a real cinema with real audience. She can’t stop asking us: “What about MY movie!?” She has seen parts of some rough cuts, but nothing in a cinema with an audience. That will be a special moment for all of us.