Continue to Variety SKIP AD
You will be redirected back to your article in seconds
Aug 11, 2021 9:56am PT 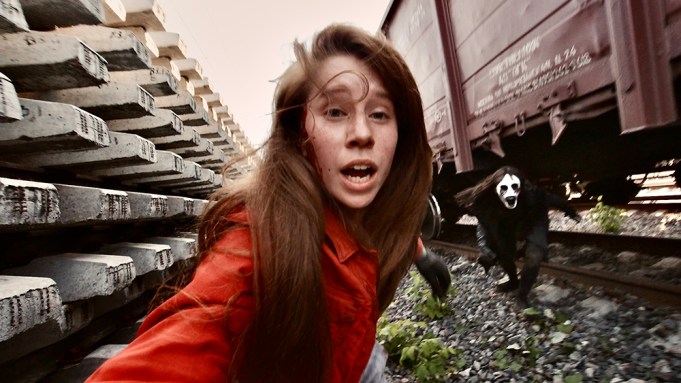 “Searching” and “Profile” creator and Screenlife format pioneer Timur Bekmambetov is a co-producer of “#Blue_Whale.”

The cautionary tale is inspired by a news story Zaytseva came upon years ago which was later presented to her as a treatment. The story of teens being pulled into a deadly online game resonated with her at once. “I wanted to understand how it happens – how children could get hooked online and manipulated so easily,” she said.

Set in a small Russian town, “#Blue_Whale” tracks young Dana (Anna Potebnya) whose younger sister has just killed herself. Anxious to find out what drove her sister to step in front of a speeding train, she delves into her sister’s online history to discover a sinister social media game that urges teens to take on a series of challenges which culminate in suicide.

Knowing that the only way to uncover the mastermind behind this game is to join it, she signs on, jeopardizing her life and those of others close to her.

The trailer, which bows exclusively in Variety, opens on the sisters tussling over a phone followed by a scene of the younger teen taking her last steps. Chaos ensues as Dana dives deeper into the game. #Blue_Whale was made in the Screenlife format where the whole story is played out on the screen of the lead character’s computer or smartphone.

Before taking on the project, Zaytseva and her mostly female team consulted with psychologists who dealt with similar cases. “We read all the stories around the Blue Whale Challenge, Momo, and others,” she said in reference to the cybercrimes that are said to have rampaged through Eastern Europe and elsewhere, allegedly causing more than 130 deaths, along with the Japanese Momo challenge it inspired.

“The most striking thing for me was the cynicism of the people curating these groups that gave tasks to teenagers. They were also teenagers, the same unfortunate kids, often from poor, dysfunctional families, having the same issues as their peers,” noted Zaytseva, who is 36.

“The Internet turned out to be the place to overcompensate that, where they could look the way they wanted, but not what they were in the real world,” she continued.

“Digital experiences may impact a teen’s mental health and well-being but blaming solely social media for that is to be misguided about the real causes,” she observed.

“What really kills is indifference and that’s why Blue Whale challenges and things like that come to life. It’s a wake-up call for those blaming the Internet and technology but missing the bigger picture, those who, when these things happen, instead of trying to figure them out, are simply afraid to talk at all,” she asserted.

Zaytseva points to Screenlife-formatted films “Searching” and “Profile” as sources of inspiration where she was “mesmerized by how action-packed those stories unfolding on the computer screens could be.” She also points to “The Blair Witch Project” as one of her early influences.

The film bows theatrically in Russia on Nov. 19 before it streams as a series on Kion.