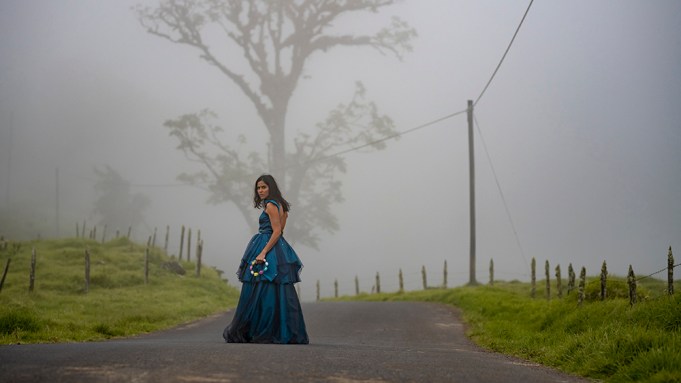 Set in a remote Costa Rican village, the magical realist story turns on middle-aged Clara, played by debut actor and award-winning dancer Wendy Chinchilla. In the community, Clara is well-respected as a spiritual healer who brings hope to the rural population. Having been dominated for most of her life by an overbearing mother, she experiences a delayed sexual awakening after meeting her niece’s new boyfriend.

With this new dimension of her personality exposed, Clara explores uncharted territories and crosses physical and mystical boundaries once seemingly unpassable. Through her journey of empowerment and self-discovery, she is able to break the co-dependent bond between herself and the community and start to heal.

In the trailer we are given a brief look at the ceremonies and customs in which Clara is expected to participate. Shades of blue and green dominate until a brilliant white horse appears alongside the young man who becomes the object of Clara’s desire. In just over two minutes, Clara seems to be coming out of her shell, hinting at a metamorphosis the film itself will surely portray in detail.

Writer-director Mesen is a Columbia University film school grand and has participated in prestigious programs such as Berlinale Talents, TIFF Filmmaker Lab and NYFF Artist Academy.

As a project, “Clara Sola” won the CTT and El Taller awards at the Guadalajara Co-production Meeting in 2018. Her short films “Filip” and “Asunder” both won awards at international festivals, and she co-wrote “Entre Tú y Milagros,” winner of the Horizons Award for Best Short in the 2020 Venice Film Festival. She’s currently developing her next feature, “The Wolf Will Tear Your Immaculate Hands.”