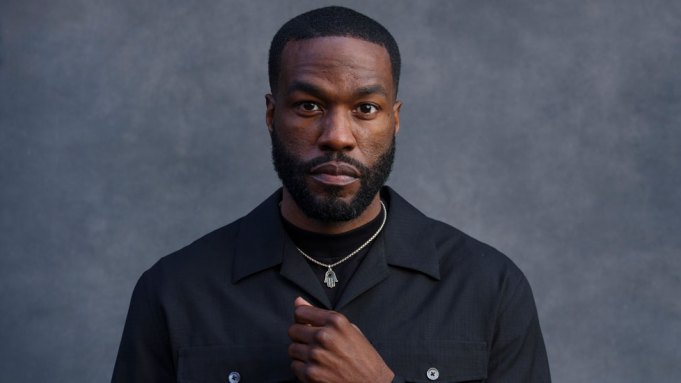 With “Candyman” debuting at the top of the box office, earning $22 million in its opening weekend, star Yahya Abdul-Mateen II is just getting started with his Hollywood takeover.

After top-lining the “spiritual sequel” to the 1992 horror classic, directed by Nia DaCosta, Abdul-Mateen has a string of high-profile roles in the pipeline, including a secretive part in “The Matrix Resurrections,” plus reprising his role as Black Manta in the comic book sequel “Aquaman and the Lost Kingdom.”

It’s only been five years since the actor’s breakout performance in Baz Luhrmann’s gone-but-not-forgotten series, “The Get Down,” but lately, Abdul-Mateen’s career has shifted into a higher gear, and the actor is certainly not letting up on the gas anytime soon.

In 2020, he earned his first Emmy for HBO’s “Watchmen,” and, in April, won a SAG award for his portrayal as Bobby Seale as part of the ensemble cast for “The Trial of the Chicago 7.”

Moments before sitting down for a virtual interview with Variety, news broke that Abdul-Mateen would star in the dystopian crime thriller “By All.” The new movie marks the star’s fifth project for Warner Bros., including George Miller’s “Mad Max” prequel “Furiosa,” with Anya Taylor-Joy and the action thriller “Emergency Contact,” which Abdul-Mateen will produce alongside Dwayne Johnson. Abdul-Mateen also stars opposite Jake Gyllenhaal in “Ambulance,” Universal’s upcoming action movie directed by Michael Bay.

Below, the actor details his process in joining the latest “Candyman” installation, and expertly fields queries about his top-secret new projects.

How did Nia first pitch you this story?

First, I had a conversation with Jordan [Peele, producer and co-writer of “Candyman”]. He said, ‘Hey, I’m doing ‘Candyman,’ and I want you to be a part of it. But I want you to talk to Nia.’ Because [she] was going to be at the helm of it. I had known the type of work that he wanted to do just from my experiences with a working with him on ‘Us.’

But when he introduced me to Nia, we didn’t even talk about ‘Candyman.’ We talked about filmmaking. We talked about drama school, we talked about acting, we talked about some of her favorite films. She told me how she wanted to make the movie — she referenced ‘The Fly,’  ‘Rosemary’s Baby,’ and a couple of a couple of other films, and I said, ‘This woman has class and she has taste and she’s really, really smart.’ She was somebody who I knew that I could entrust my talents with and that she would take care of me. And that was definitely my experience from start to finish.

What was the most complex part about playing Anthony? Was this a lot of green or blue screen, like on “Aquaman” or “The Matrix”?

No, this one didn’t have any green screen for me, which I enjoyed. I enjoyed being able to stay in the natural real world for this as much as I could.

I think one of the most challenging things about this one was taking the story of Anthony’s trauma, the history and the things that were happening to him, and knowing that a lot of times you can’t really see trauma. Trauma doesn’t really manifest on the outside and it manifests on the inside mentally — with our changes in behavior, our health, our patterns and things like that. Our actions.

But Anthony’s trauma, and the lineages of trauma that landed in [his] lap, began to manifest on the outside of his body. And that was something that I carried with me throughout the performance and how that allowed his physicality and his emotionality to change as the movie progressed.

Since we’re talking practical effects — does that mean there were bees that you were working with? And if so, did you negotiate a bonus like Tony Todd did for any bee stings?

Oh, man, Tony was a smarter man than me, with the sting bonus. [laughs]. But luckily, I felt that I was safe throughout this. And there were some crafty workarounds for our version of “Candyman” that kept me safe. I didn’t have to get stung by any bees.

I can’t get away from announcements about more movies for you — you’re the busiest man in Hollywood. The next one is another secretive project — “Matrix 4.” What is the biggest difference between stepping into a piece of IP like “Matrix” and doing one like “Candyman”? Or is it a very similar situation?

It’s not very different. They both are classics that people love. They come with high expectations of excellence, and audiences cannot cannot wait to see them. And it’s nice to be a part of that.

Of course, they also come with the opportunity to, to add your own spin to moments and characters. And we’re looking forward to doing that with the “Matrix” in the same way that we did it with “Candyman.” It’s all an opportunity to tell new fresh stories and to change the narrative and to add a new perspective on it.

So then does that mean you’re playing a new character, or a version of somebody that we already know in “The Matrix?”

In “The Matrix?”  Yeah, I think you’re breaking up a little bit. All of a sudden, I can’t hear you so well.

Then you have “Aquaman 2” — what’s the biggest difference playing Black Manta now that it’s been a few years?

Now, we have a character who’s more mature, who has more time to breathe. And we get to understand him and some of his values and some of his motives. Hopefully in “Aquaman 2,” we can present a more well-rounded version of David Kane.

In the first film, we sort of got to meet him, but mostly it was about Black Manta. And this one, my hope is that we can meet David Kane a bit more and find out what makes him tick, and some of the things that he wants and struggles with.

It’s a bit more mature of an experience for me, and I’m looking forward to bringing that to the screen.

How interconnected is “Aquaman 2” with the rest of the DCEU? Your good friend, Dwayne Johnson is now Black Adam. In this whole DC realm, could we see a zillion more crossovers?

And I’m analyzing your facial reaction too.

That’s one of those questions that I’ve kind of gotta be tight-lipped about. But I am excited about what Dwayne’s gonna bring. There’s a lot of new blood and new energy into this DC world right now. And, hopefully, it continues along the line of that trend.

Last thing, what have you learned about the business from working with the likes of Johnson [on “Baywatch”] and Reeves [on “Matrix”]?

Kindness. And those two — along with Hugh [Jackman, in “The Greatest Showman”] and Jason Momoa [in “Aquaman”], as well — I’ve had nothing but excellent examples of being the number one on set. Kindness and hard work goes a very, very long way.

“Candyman” is now playing in theaters.