Rashida Jones and Dominique Fishback on Recognizing the Power of Their Voices: ‘Our Words Are Forever’ 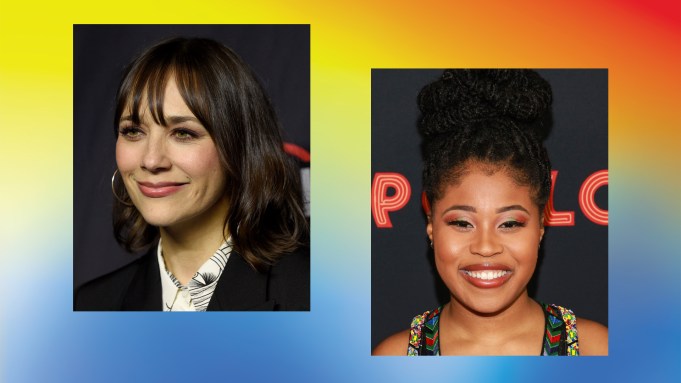 Before Rashida Jones switched from plans for law school to acting in the late 1990s, she was immersed in the arts. Jones, the daughter of entertainment icons Quincy Jones and Peggy Lipton, grew up with the idea that “If you have something to say, you should say it.”

“It didn’t occur to me that there was a reason that I could be shut down,” Jones recalls.

But, Hollywood had other ideas — and, as a Black woman in the industry, she quickly noticed a pattern.

“I realized that it had nothing to do with me. There’s a systemic thing at work that I just happen to be not reaping the benefits from,” Jones explains. “There’s been many times in my career [where] I’ll say something or have an idea and it’s just washed over. And then 30 minutes later, an hour later, a day later, a white man says it and everybody’s like, ‘What a great idea.’”

Over the past two decades, the writer, producer, director and “On the Rocks” star has seen a shift. “People are anxious to be [like], ‘What do you think? What do you have to say?’ There is an appetite now, which is really nice,” Jones says.

Dominique Fishback, who has earned Oscar buzz with her breakout role as Deborah Johnson in “Judas and the Black Messiah,” hasn’t been in Hollywood as long, but she’s faced similar obstacles. The actor, playwright and poet learned the value of her voice while coming up in the theater, as she experienced incidents of her work being “edited,” when in her estimation her perspective was actually being erased. The two actors discuss how they developed the confidence to take control of their own narrative.

When was the first time you remember feeling seen for your work?

Rashida Jones: I wasn’t going to act. I was going to be a lawyer. I was dealing with some depression in my sophomore year in college and I did a couple of plays. One of them was “For Colored Girls.” That was the first time where I remember feeling that, if you work really hard and you work with a good director and a great cast, you can make something that feels intimate, personal and yours, but that belongs to this longer lineage of greatness and of artistry. Having a big heavy monologue to dig into and having to talk directly to an audience was probably the first time that I felt like I was capable of something great that could have an impact on people.

Dominique Fishback: My mom is a schoolteacher, and I would write poems when I was 12, and she would say, “Oh, my goodness, where
did that come from?” [So] I always felt like I had something. I started acting at the MCC Youth Company, where they took inner-city youth from around New York. I was 15 and learning about myself onstage, and they would say, “Your voice matters. How do you want to say it?” I think that stayed with me, so I would navigate the world moving forward knowing I had a voice.

In other theater companies, they would try to change [my writing] and they would call it “editing.” I would text them and say, “This is my piece; you can’t remove me. This is my voice, and if you want to use my concept, then say that the original writer does not approve of this.”

Rashida Jones: How did you, at such a young age, know that you had to protect that?

Fishback: I think, ultimately, I knew that if I didn’t have anything else, I have my voice. My words — and our words — are forever. I struggled with [speaking up] too, because I don’t want to seem ungrateful. I’m grateful to be here, and so many people don’t get to be here, but just because
I’m grateful doesn’t mean I have to be walked over.

Rashida, in “On the Rocks,” you tell Bill Murray, who plays your womanizing father, “You have to start listening to women’s voices.” Have you had that experience personally?

Jones: I’ve had that experience many times in my career. I try to take those things in stride, and I’ve tried to let it build character and not bitterness. Because the truth is, there’s still some of it, [though] it’s definitely better. I feel like, from the pipeline studio level to the casting level to the development level, everybody in the business is moving toward showing better and more accurate representation of the actual demography in this country, including women and women of color.

What did you make of how Black identity was handled in “On the Rocks”? It’s not really the key part of the storyline or explicitly mentioned.

Jones: In the ’90s, because of my name and the way I looked, I’d go to castings and people would make assumptions about what I was going to look like. There wasn’t a ton of mixed representation on TV at the time, and I would hold my breath until I read the whole script [thinking], “Am I going to have a conversation with the directors or producers because I need to be represented right?” You can’t just plug me into an Italian family. You have to consider my family and what’s important to me. I can have those conversations openly; that’s such a huge relief to me, and it was not like that the first 10 years of my career because I didn’t have the power. I think I was scared to feel like I was freedom fighting in a place where I didn’t have a lot of authority.

Dominique, what was is like to work on “Judas and the Black Messiah”?

Fishback: It’s a boy’s club, and I was nervous if my jokes would land. Am I going to be included? But that wasn’t an issue at all. The level of care and respect they showed was incredible. It was never [about] ego, and never disrespectful. It was always supportive.

I learned how to trust Black men because Shaka [King] made my voice matter, allowed me to be heard and always gave me credit where credit is due.

Talk about taking control of the narrative, especially directing and producing. Why was it important to get behind the lens?

Fishback: I never wanted to be a director, I wanted to be in the writer’s room. I got to Sundance and saw all the women directors and creators, and what it would mean to have complete control of your story. As a writer, once you sell it, it goes into other hands, so tell me about the experience.

Jones: I’ve directed things that I’ve written and I’ve not directed things that I’ve written. I think it’s about who you collaborate with and who you trust. For a long time, I didn’t want to direct, but part of it was feeling there is a vision you have to have that might make you unlikeable to some people, or assert yourself in other people’s space. I wasn’t sure my energy was well suited to that.

I want to be better because of the people I’m around, and that is super important to me. I don’t purport to know everything. With directing, you can bolster yourself with a great DP and a great first AD, you can make your life easier by having talented people around you.