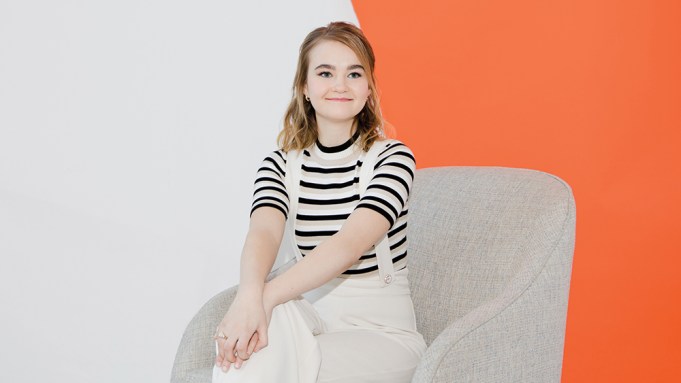 Millicent Simmonds is at the forefront of a cultural movement to hire more actors with disabilities. The young performer knew she wanted to pursue an acting career after working with director Todd Haynes in “Wonderstruck” in 2017, and thanks to director John Krasinski, the deaf actor scored her breakout role as Regan Abbott in “A Quiet Place” the next year.

In the film, she plays the deaf daughter of Krasinski’s Lee Abbott in a post-apocalyptic thriller where monsters are drawn to sound and people must maintain their silence in order to live. The surviving members of the Abbott family, who include Emily Blunt’s Evelyn and Noah Jupe’s Marcus, return for “A Quiet Place Part II,” set to hit theaters May 28.

What was the audition process like for “A Quiet Place”?

I sent in a video. Krasinski emailed me and said he wanted me to play the role of his daughter in the film. For “A Quiet Place II,” he FaceTimed me.

How do you feel about hearing actors getting cast as deaf characters?

I think it’s not realistic, and it’s not fair to the talent out there who aren’t chosen because of their disability. That doesn’t make sense to me.

How has your confidence grown since the first film?

My life has completely changed. It’s affected everything from my school life to my family life, my friends — everything has changed a lot. I think I’m actually learning confidence from Regan. She’s so confident in what she does, and she’s trying to find justice in the world and follow in her father’s footsteps, and I hope to do the same thing in real life in this world.

Did you and the rest of the cast bond off-screen?

Yes, I’m very close friends with Noah Jupe. We’re close in age, and we learned so much about each other being on set, and our relationship is very sassy. But working with Blunt and Krasinski, we’re all in touch. If we’re in the same town, we always go out to dinner together.

We had an ASL coach and a sign language interpreter who, if people had questions about deaf culture and the history of sign language or to make sure the sign articulation was correct, or if they wanted to learn more signs than just their lines, then they would teach that, and I really appreciated that. Noah is a fluent signer because we spent so much time together.

What is your favorite horror movie?

“Parasite” — one of the things director Bong Joon Ho said is that it’s one inch of subtitles that can reach more people in the world so that they can understand, and that’s what we need as deaf people. For us, it’s so important. I don’t understand what’s so hard about just putting text on the screen. There’s a lot of resistance around it. People who can hear perfectly also rely on captions and subtitles because sometimes they can’t understand. So this just makes sense to me. I’m glad he brought it up.