These New Yorkers Don’t Care What’s Playing in Theaters. They’re Just Happy to Be Back at the Movies 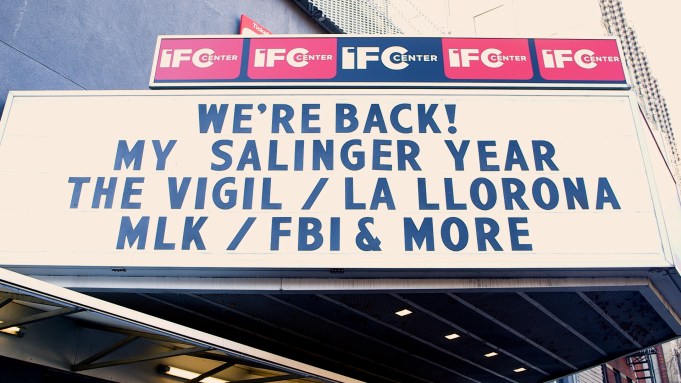 The couple returned to their sacred space, IFC Center in Manhattan’s Greenwich Village, on Friday to see “Another Round,” a drama about hard-living teachers starring Mads Mikkelsen. They arrived early and commemorated the long-awaited return by taking pictures excitedly posing in front of a theater marquee that read: “We’re back!”

“I realize [the movie] is online, but this is a much better experience,” Thomas says. It’s also a celebration of cinema and science, she says, since Thomas and Kempin have already been vaccinated. “We’re going to wear our masks the whole time,” she adds.

After nearly a year of closures, New York City movie theaters were able reopen this weekend. Venues in the five boroughs are currently operating at 25% capacity, with no more than 50 people allowed in a room at a time. Cinemas plan to keep coronavirus at bay by selling tickets online to reduce contact, requiring masks, upgrading air filters and blocking out rows between occupied seats. IFC Center has taken the extra step of keeping its concession stand closed to ensure guests don’t have a reason to remove their masks.

Austin Frankel, who visited Village East Cinema for a screening of Christopher Nolan’s sci-fi epic “Tenet,” says he feels pretty safe given the precautions taken. There’s no reason in particular he opted to watch “Tenet,” he says. “I just wanted to see a movie in theaters.”

What movies are even playing in theaters these days? For those in attendance, the film in question wasn’t the main reason they showed up at their closest multiplex on a chilly Friday afternoon. Rather, audiences were guided more by a desire to get out of the house and sit in a darkened theater with a tub of popcorn at a time when it’s too cold to do anything outside. Cinemas across the city were sparsely populated, but those who bought tickets conveyed their emotions ranged from “pretty excited” to having an “out of body experience.”

Micah Chavis and Mizan Taylor elected to see Disney’s animated adventure “Raya and the Last Dragon” at AMC Village 7. “I worked at a movie theater before [the pandemic],” Chavis says. “I was watching movies every single day.”

As sample sizes go, the people turning out to the first possible movie screenings likely rank among the die hard of the die-hard cinephiles. Anyone who felt ambivalent about returning to theaters were understandably absent from opening day crowds. Plenty of onlookers walked by multiplex doors, bewildered that movie theaters have turned their lights back on.

At IFC Center, New Yorker John Rerdan bought a ticket for “Mank,” David Fincher’s drama about the screenwriter of “Citizen Kane.” He had “no hesitation whatsoever” about returning to cinemas, even though he’s already seen the movie on Netflix.

“My TV just isn’t big enough,” he says, mentioning he cleared his work schedule to make certain he didn’t have conflicting meetings. “There’s a lot to catch up on. I will be going regularly.”

“I have no idea what’s coming out,” Lezhen says. “I just want to go and sit there.”