‘Mortal Kombat’ Director Simon McQuoid on Fatalities, Fight Scenes and All That Blood 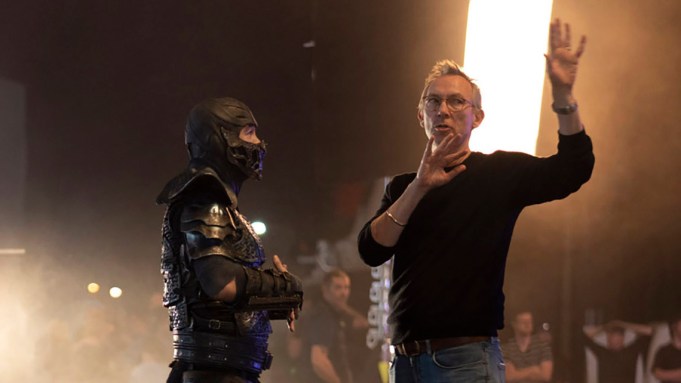 The Warner Bros. movie, which debuts in theaters and on HBO Max on Friday, follows a group of fighters who participate in a multi-dimensional death battle called Mortal Kombat. The combatants include a military veteran with robot arms, an Australian with a laser eye, monks who throw fireballs and razor-sharp hats and two ninjas who can control fire and ice but not their centuries-long grudge against each other.

Though “Mortal Kombat” is McQuoid’s feature directorial debut, the Australian filmmaker cut his teeth shooting commercials for the likes of Apple, HBO, Netflix, Volkswagen, Mercedes and Samsung. He’s no stranger to the video game world either, having made cinematic shorts for Xbox, PlayStation and Activision for games like “Halo 3” and “Call of Duty.” Among his awards are a Grand Clio, a D&AD Yellow Pencil, a Grandy Award, Cannes Gold Lions, the 2012 AICP honor for best direction and the Film Grand Prix at Cannes.

From his native Perth, Australia, McQuoid spoke to Variety about bringing the “Mortal Kombat” characters, fight scenes and bloody finishing moves, a.k.a. “fatalities,” to life.

Did you play “Mortal Kombat” growing up?

I knew about it, but I didn’t play it that much. It wasn’t on my radar early on, but I was aware of the characters more than anything. I did play a lot of video games as I got older, but they were more “Halo” and “Call of Duty.”

Why did you want this movie to be your directorial debut?

What I saw in the original script was this ability to take fantasy characters and a fantasy world and bring it into a reality that feels very authentic. There’s something I really love about science fiction and fantasy that has a realism to it. With that amount of bloodshed, we could be authentic with the fights. When someone gets stabbed, blood comes out. There was a space out there that I felt “Mortal Kombat” had yet to occupy, and that was in this big, epic way, but still done with a grounded quality to it.

Were there other action movies that inspired the fight scenes?

Not really. It was born of the characters and how they needed to be plausible, authentic and powerful. I didn’t want crazy, wild camera movements just for the sake of it, and I used those sparingly because I felt the power within the scene was the actual choreography and the ideas within the fight. I think people really respond to the ideas within fights, so it almost becomes a puzzle that you see working out, like [Sub-Zero’s] blood blade. The content has to be really fascinating, powerful and magnetic, so I don’t want to paper over it with flashy camera moves.

Sub-Zero stabbing Scorpion and then freezing his blood to turn into a frozen blade was definitely one of the coolest moments in the trailer. What other fight elements are you excited for fans to see?

In each fight, I tried to give a gift to the audience. One thing that was important to me was to show how Scorpion’s kunai blade on the rope is born. This is why he was driven to do these things, this is why he ends up with it. I’m really happy with that. That rope work flying the kunai around, a couple of the shots are CG rope, but there are a couple of them actually done. I really love how that turned out. The stunt and fight guys did the most incredible job and made me look way cleverer than I actually am.

How messy was filming with all that blood?

It was messy. Messier for the makeup team than it was for me. I would just point from afar. I said to everyone early on, “I want as much of this in camera as possible,” knowing that there was going to be a ton of VFX to come.

The “Mortal Kombat” games are notorious for their gore and have been banned in some countries. Did you have to tone down the violence?

Yeah, it’s something we thought about. We knew there was a line we couldn’t cross. It was a constant calibration, balance and discussion. There were a couple ideas early on that we knew if we did them justice, if we shot them the way they should be shot, they were possibly too full-on and could get us in trouble. There was a lot of discussion about the fatalities and how they were all different from each other; they couldn’t be the same. We talked about blood a fair bit.

That would be [Sub-Zero actor] Joe Taslim. Everyone would say to me “Joe is very hard to beat.” That’s the type of guy he is. Whatever he does, he tries to do it as well as he can. Joe loves life, he’s one of these guys that is very caring, loving, all about making the most of something.

From the costumes to the music to the quotes, how did you translate those fan-favorite video game elements to the movie?

What we realized early on is that “Mortal Kombat” has a lot of very important DNA strands that make it up. I wanted to infuse this cinematic version with that. For instance: the music. Ben Wallfisch did a forensic study on that [“Mortal Kombat” theme] song. Because Ben is an actual genius, he pulled that thing apart and then used pieces from it as source material to then regrow new music. Raiden’s theme is actually a piece of the melody slowed down. We did that across the board. “How do we get those very classic lines? How do we make sure they land in a way that doesn’t feel just plunked in?” The costumes, same thing. It was about respecting the material and then elevating it as best we could.

Video game movies sometimes come with a negative connotation, because there have been a lot of bad adaptations over the years. Was there any pressure making this movie and appealing to fans of the games?

No, not really. We just aimed at making a good movie. It helps that “Mortal Kombat” is built upon fascinating characters. That’s why people love it. The source material, by its very nature, has the properties that are helpful in a film. I said early on, “Let’s pretend they’re a set of novels that the video game is made from, that the first movies are made from and so on.” Really that was just to say, “There’s a lot to this. Don’t fall for the trap of ‘Oh, we’re just doing a video game movie.’ It’s more than that.” It’s had such a life and a lot of work done on it. There’s a lot of depth to the characters, the story and the world. I’ve done a few video game commercials in the past, and through that process and playing games myself, I understood why this really matters to fans. When you’re fully immersed in these worlds, you really care and love these characters. So we really had to handle them with a great deal of respect. And hopefully we’ve done that.