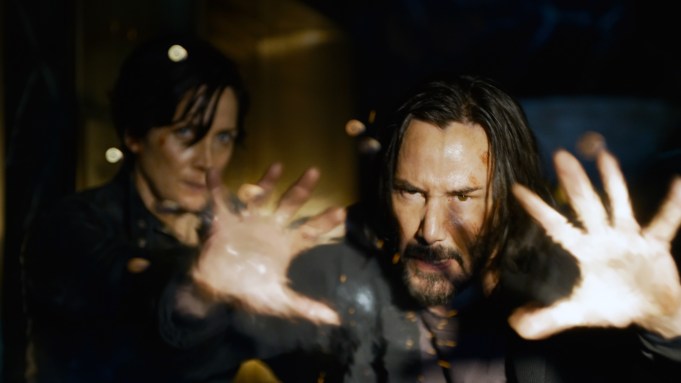 After directors Lana and Lilly Wachowski reinvented the Hollywood action film with 1999’s “The Matrix,” theatergoers were confronted with a cliffhanger at the ending of its 2003 follow-up “The Matrix Reloaded”: “To be concluded…” reads the end title card, before the movie queues up Rage Against the Machine’s “Calm Like a Bomb.” Then “The Matrix Revolutions” followed later that year, offering what seemed to be a pretty definitive conclusion to the series’ tale of humans warring against their machine enslavers.

But now, after nearly 20 years have passed, Neo (Keanu Reeves) and Trinity (Carrie-Anne Moss) are going back to where it all began. Helmed by Lana Wachowski, “The Matrix Resurrections” reunites Neo and Trinity for a new story inside the world of the Matrix, though neither hero remembers each other or their past romance together.

“I think the love story is really strong in the film,” Reeves told Variety’s Angelique Jackson, explaining what intrigued him most about Wachowski’s plan to revisit the franchise.

While there’s plenty of acrobatic action and heady visual references, as well as a strikingly meta take on “The Matrix” as a pop culture phenomenon, “Resurrections” finds its north star in its protective impulse for Neo and Trinity. In a change from the original trilogy, where Trinity was aware of the simulated reality Neo was living in, this prospective blockbuster’s plot primarily plays out as a meeting of the equals and grounds itself in the emotional stakes of its central romance.

“I really felt how much Lana loves Trinity and Neo,” Moss shared. “I definitely had moments where I completely felt that I was embodying Lana Wachowski’s heart in playing this role.”

“Resurrections” also introduces a series of newcomers, including Jessica Henwick, who plays Bugs, a gunslinger seeking to extract Neo (who audiences meet in the “real world” as Thomas Anderson … again) from the Matrix. It’s an action-packed role, with Henwick showing off fight skills that emulate Moss’s.

“I think that it’s amazing what Trinity signifies in the history of action stars and women on film,” Henwick said, sharing her admiration for both the actor and her character. “I kind of see this whole film as a love letter to Trinity. It’s a wonderful thing to be part of that legacy.”

Henwick also confessed her own love for the “The Matrix” series, explaining how her personal enthusiasm for the original trilogy bled into her performance for the film.

Like Henwick, actors Yahya Abdul-Mateen II and Priyanka Chopra Jonas are new to the series, though the roles they play are not. Abdul-Mateen takes on the character of Morpheus, the man who first liberates Neo from the Matrix, and who was played in the original series by Laurence Fishburne.

Explaining how his Morpheus is slightly different from Fishburne’s version, Abdul-Mateen said, “I was playing a character who was figuring out what it meant to have choice for the first time. He was interested in his own freedom and building his identity, which is not dissimilar from the task that I had at hand, with going in and [not] doing an imitation of Laurence Fishburne.”

Chopra Jonas was also a massive “Matrix” fan before signing on to play Sati, who first appeared as a child in “The Matrix Revolutions.” Having the chance to join a franchise that she’d enjoyed since she was 16 years old was beyond her wildest dreams, and Chopra Jonas happily accepted the responsibility of the role.

“I didn’t anticipate the depth of which this character, the depth of this character that meant so much to [Lana],” Chopra Jonas recalled. “She talked about strategically placing her in the previous movie, and having a foreshadowing of who she could be. That, to me, was really cool and very exciting.”

At its heart, returning to the Matrix for a fourth go-round was all taking about a leap of faith — which Reeves and Moss literally demonstrated when Wachowski had them perform almost 20 takes of their characters leaping from a San Francisco rooftop. Despite the years away, the duo felt right back at home returning to the series and the roles that launched them into the pantheon of action movie stars.

“As soon as I stepped foot in the training center and saw Keanu I was like, ‘This feels so good. I’m so happy to be back,'” Moss said.

“The experience was even more than I could have imagined,” added Reeves.

See the full interview with the cast — including Jonathan Groff (who plays a character named Smith) and Neil Patrick Harris (who is The Analyst), who tease their mysterious new roles — in the video above.

“The Matrix Resurrections” is now playing in theaters and streaming on HBO Max.