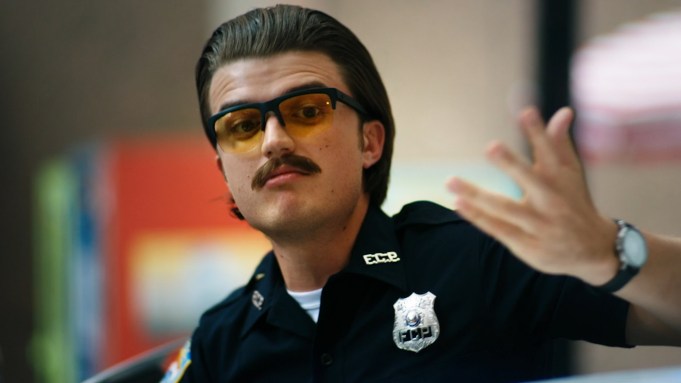 But in his new movie “Free Guy,” Keery and the cast, led by Ryan Reynolds, pay tribute to a different decade (while keeping the same great hair). Mariah Carey’s 1995 smash hit single “Fantasy” plays a major role in the video game movie and Keery admits he didn’t know all the words before signing onto the project.

“I do now,” the actor quips, telling Variety that “Now, I’ll always think of Ryan when I hear the song. It was a good throwback. And I’m sure [Mariah’s] probably like, ‘Yes,’ now that it’s coming back around. That’ll be a nice paycheck I would imagine.”

Like Carey’s big bonus, Keery received one of his own – the opportunity to work alongside Reynolds in one of his first big films.

Reynolds stars in the movie, playing Guy, a bank teller inside the popular video game, Free City. The game itself is more Grand Theft Auto than The Sims, so Guy and all the other NPCs (non-payable characters) are subject to a daily routine of morning coffee runs followed by casual bank robberies. Guy’s best friend, the bank security guard Buddy (Lil Rel Howery) is perfectly content with this routine, but when Guy meets Molotov Girl (Jodie Comer) he begins to wonder if there’s more.

Outside of the game, Keys has his own history with Molotov Girl, which actually the username of a woman named Milly, who happens to be Keys’ friend and former programming partner. They developed a game together, but when Antoine (Taika Waititi) purchased it, Keys went on to work for his company while Milly took another path.

“When we meet him, he’s really at a low point in his life,” Keery says of the character. “He’s kind of depressed when we first meet him, and I kind of liked that. It was a springboard for where his arc would take him on this little adventure with Milly. It was amazing already having that right at the onset, and then being able to do my work from there.”

Keery workshopped the earnest character with Reynolds and director Shawn Levy (with whom he’s worked for years on “Stranger Things”) developing an emotional arc that will take viewers by surprise. “I think it’s a unique sort of twist at the end, so I’m excited for people to see that,” Keery teases. “It is like a nice little emotional stamp at the end of the movie.”

Because Keys primarily exists in the real world outside of the game, Keery relished his opportunity to get inside the action. As seen in the film’s trailer, the actor is featured in a particularly memorable scene where he dons a “’Reno 9-11’ stripper-cop” costume and his fellow programmer Mouser (Utkarsh Ambudkar) dresses as a pink fluffy bunny. It’s the kind SFX-heavy, yet silly, scene that can only happen in Free City. The scene was also one of Keery’s only with star and producer Reynolds, where he marveled at the star’s mastery of this genre.

“I was pretty blown away because he just makes it look really easy,” Keery says. “And what he’s doing, it’s hard. Not anyone can do it. It just gave me a really deep appreciation for him and all of his work that he’s done up until this point.”

Keery also used the opportunity to learn from Reynolds both in front of the camera and behind the scenes. Sharing what he gathered, Keery says, “Ryan’s just got a level of kindness towards every person that he meets, and inclusivity. [As] a leader on set because of the experience that he has in the business, he establishes a great energy.

“And as the kind of leading actor,” he continues, “[Ryan] just set a tone of collaboration really early on, and comfortability. I assume he’s probably aware that people are nervous to meet him. And, right away, he’s very disarming and really puts you at ease.”

But Reynolds wasn’t the only actor Keery took notes from. Comer was already attached to the film with Keery signed on. The actor was a fan of Comer’s Emmy Award-winning work on “Killing Eve,” so he was thrilled to spend so much of his screen time with her as the backstory behind Milly and Keys’ partnership is revealed throughout the film.

“We just slowly found their relationship throughout the filming process,” Keery says of working with Comer to find the characters’ chemistry. “And it helps that she’s so great — obviously a great actor, but I just mean a great person, collaborative and easy to get along with.”

He also picked up a few things from Waititi, particularly how to be fearless in a scene.

“Being scared or being nervous on set just inhibits your performance,” Keery says of the performer and Oscar-winning director. “[Taika] is so free and so open and willing to fail. And he doesn’t hold anything back. I think that’s a that’s really good advice for a young actor who’s coming up and in their first big gig.

The whole “Free Guy” crew has had a long time to get to know each other, filming the movie in 2019 before it’s release was delayed due to the COVID-19 pandemic. Over that same amount of time, Keery also returned to the fictional town of Hawkins, Indiana to reprise his role as Steve Harrington for “Stranger Things’” fourth season.

Keery has already wrapped filming on the new episodes, which Netflix released an teaser for earlier this week. In recent interviews, the actor has mentioned that there’s “an end in sight” for the “Stranger Things” crew and admits that he’s started to get a little sentimental on set.

“Wrapping up down there and saying goodbye to everybody is bittersweet,” Keery explains. “It’s something that we’ve grown up doing. Seeing all my friends on this show, we’ve all changed a lot, and different things have happened in our lives, and we’ve all been through it together.”

He adds: “When it does come to an end, I imagine it will be emotional. I’m just enjoying it while I can, really.”

“Free Guy” lands in theaters on Aug. 13 and the fourth season of “Stranger Things” debuts in 2022.