Welcome to this week’s “Just for Variety“…

Yvette Nicole Brown says after four years of Donald Trump, this year’s EMILY’s List pre-Oscar event is “like a burst of sunshine.” As always, the organization, which works to elect female Democratic candidates, will host a keynote panel with industry figures on April 20 (see Must Attend for details). “Talk about a light at the end of the tunnel,” the former “Community” star says of the Biden-Harris administration. “I think we as a nation have turned a corner. There are still tough times ahead, but we’ve all learned collectively what happens when we don’t vote or when we vote for people who don’t care about people.” Brown says she may even run for political office someday. “Before Donald Trump, I never thought about running because I believed I wasn’t smart enough to do it,” she tells me. “I put politicians and government officials and mayors and attorneys general and all those people in their own category of people that really had hearts of gold and brains that you couldn’t match. And then 2016 happened. I started paying attention to what congressmen and senators were saying, and I realized I could run.”

Next up for Brown is “Big Shot.” She co-stars in the Disney Plus series as the principal of an all-girls private high school. John Stamos plays the school’s basketball coach. Brown laughs when she says she’s old enough to be a Stamos fan from his “General Hospital” days as Blackie before he played Uncle Jesse on “Full House.” Most of her scenes are with Stamos, and Brown admits she broke once when she had a moment of realization that the man smiling at her across a desk was Stamos. “I was only caught off guard that one time because I saw that he was smiling at me, Yvette, rather than my character,” Brown recalls. “I just giggled and had to get myself together. As beautiful as he is to look at, his heart is just as beautiful. He’s a good, loving, kind, generous, fun and silly man.”

And Brown is hopeful that a “Community” reunion movie happens sooner than later. “We have a reunion every morning,” she says. “We have a group text that is popping. We joke and laugh with each other randomly. You never know who is going to start it — it may be a joke somebody has or it may be some fan art somebody got — but we always check in with each other daily. The movie? I think it’s coming. I don’t know when, [but] I know we all want to do it and that’s half the battle.”

EXCLUSIVE: Congrats to Linda Kim, who returns to “Entertainment Tonight” as supervising producer of music on April 19. Kim spent more than a decade at E! News following her initial two-year stint at “ET.” “Linda Kim is a creative force, and her producing talents are well known throughout our industry,” “ET” exec producer Erin Johnson tells me. “We are thrilled to have her back at ET,” Johnson says … Ray Halbritter, Oneida Indian Nation of New York Representative and Nation Enterprises CEO, has been named executive chairman of the Environmental Media Assn. Halbritter, who also sits on the board of the Academy Museum of Motion Pictures, recently launched Standing Arrow Prods. to help increase representation and support of Native American and Indigenous peoples on-screen. “I am proud and humbled to help guide EMA’s ongoing mission to promote environmental progress,” Harlbritter said in a statement. “America’s First People understand in our souls the pressing urgency of EMA’s struggle and we will always use our voices to help protect the health of our planet.” EMA CEO Debbie Levin said, “Ray Halbritter is not only a longtime leader in the environmental movement and of course in the Native American community, but he has been my teacher and my dear friend since we met. Having Ray take the role as Chair for our organization is a gift for EMA.”…SIGHTINGS: Kenya Barris flying Mint on JetBlue from JFK to LAX. … Michael Rapaport having a Saturday lunch at Fred Segal Mauro Café in West Hollywood. … Have you seen “French Water,” Jim Jarmusch‘s new fashion film for Saint Laurent for the house’s Women’s Summer21 collection? Art directed by Saint Laurent’s creative director Anthony Vaccarello, the 10-minute work stars Charlotte Gainsbourg, Julianne Moore, Chloé Sevigny, Indya Moore and Leo Reilly. 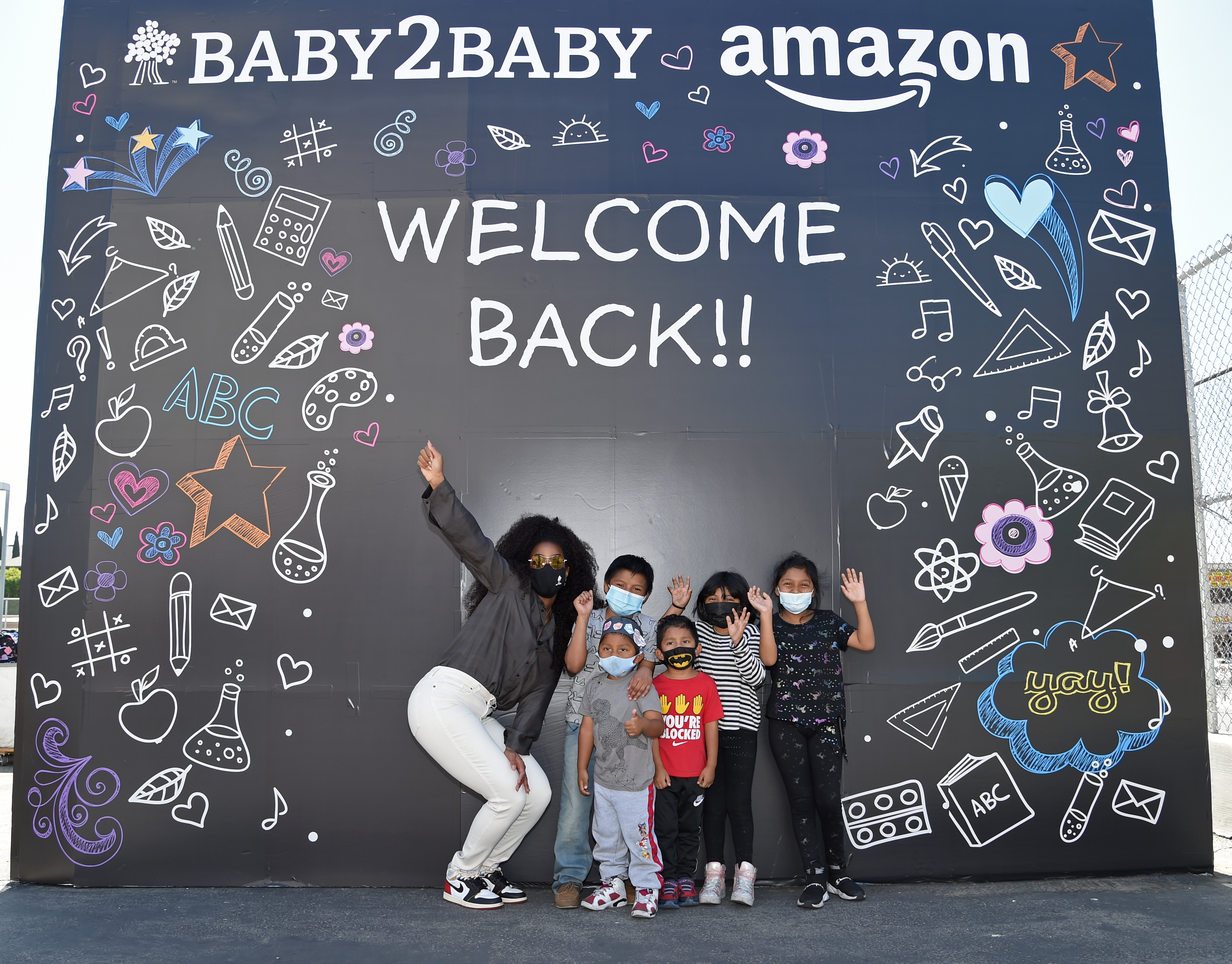 Kelly Rowland continues her work with Baby2Baby, recently volunteering to help distribute school supplies, face masks and sanitizer to MacArthur Park Elementary School for the Visual and Performing Arts students and their families in partnership with Amazon. “It’s so strange because we’re talking through masks and they can’t see your smile,” Rowland tells me. “I really dislike that part of it because I want them to know we see them, we hear them and we love them. We want them to have a sense of community. But even though there is that pandemic weirdness, I will say it didn’t stop anything today. There was so much love and excitement.”

The singer gave birth to her and husband Tim Witherspoon’s second child, son Noah, in January. A month later, the newborn and big brother Titan, 6, appeared in Rowland’s music video for “Black Magic.” Is she hoping the boys follow in their mom’s music business footsteps? “If they came to me and said they wanted to do it, I would support them,” Rowland says. “But I would literally breathe down their necks every step they were taking to make sure they were happy doing it.” But there will be no competition with Beyoncé and Jay-Z’s Grammy-winning daughter Blue Ivy. “We definitely don’t measure our children like that. That’s poor parenting,” Rowland says. “We applaud them in whatever it is that they do and whatever it is that want to be brilliant at.”

It’s been four years since we’ve seen an episode of New York deejay extraordinaire Lina Bradford’s YouTube talk show “In the Dollhouse.” Now she’s back. A third season premieres April 14 on YouTube and IGTV with guests Bob the Drag Queen and Amanda Lepore. “Logo wanted to pick it up for Season 3, and then the pandemic happened,” Bradford tells me. “As the pandemic went on, I realized I could do this on my own. It made sense for me to do it from my dressing room, where I’ve been deejaying [virtually] for the last year.” She shot nine episodes in just three days. “For each show, one guest is in person and one is virtual,” Bradford says. “It was all done safe for COVID, with testing and sanitizing.”

Freeform is ditching cars for hotel balconies. The premiere screening of its teen mystery thriller series “Cruel Summer” will take place at the Beverly Hilton April 15. However, instead of a drive-in, the network is booking over 80 rooms so guests can watch the first episode from terraces overlooking a 70-foot screen on the top of the parking garage. Each room will be filled with ’90s magazines, photo-collage boards, inflatable furniture and custom pillows and blankets, as “Cruel Summer” takes place over three summers in the 1990s. The menu will include ’90s favorites such as Hot Pockets, Whataburgers and fries; candy like Pop Rocks, Mamba, Pez, Fun Dip, Mentos, Ring Pops, Gushers and Dippin’ Dots; and Capri Sun and Snapple. 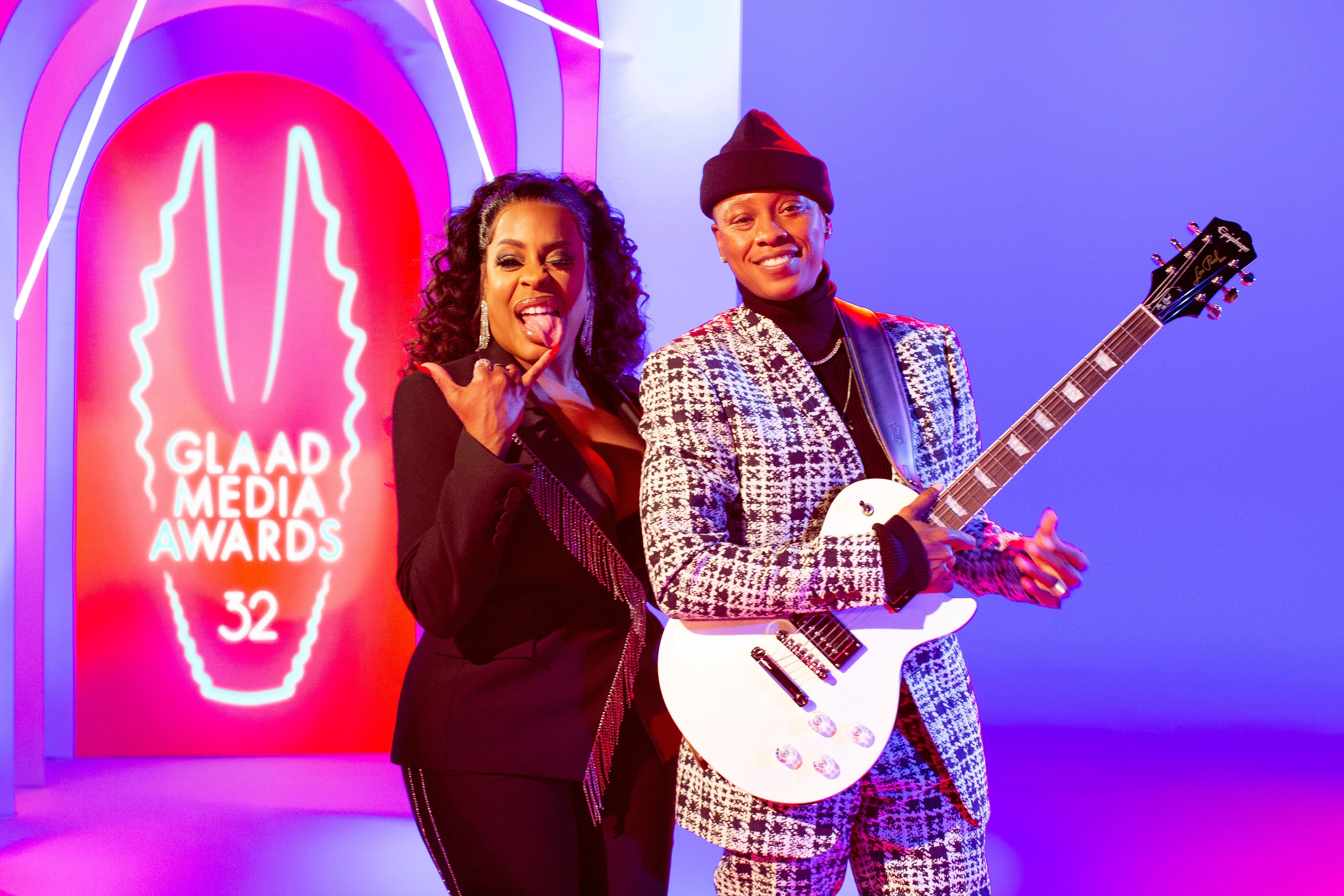 For the second time in as many years, “Schitt’s Creek” won for outstanding comedy series. HBO Max’s “Veneno” was named outstanding Spanish-language scripted television series, and the cast of “Glee” reunited for a special tribute to Naya Rivera for her portrayal of lesbian character Santana Lopez. Niecy Nash (above with wife Jessica Betts, who performed during the ceremony) hosted the ceremony. “When people laugh along with the LGBTQ character on a sitcom that they adore or see a gay couple in a Hallmark Channel Christmas movie that falls in love just the way they did, they start to understand that we are more alike than we are different,” Nash said.