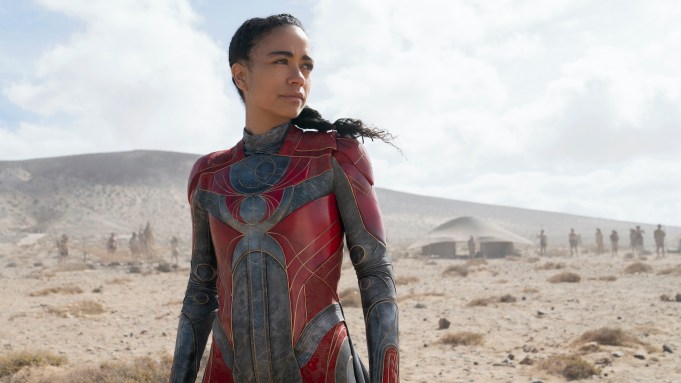 In its second weekend of release, the superhero adventure has collected a leading $27.5 million from 4,090 North American theaters. Through Sunday, “Eternals” crossed the $100 million mark in the U.S. and Canada, with box office receipts at $118 million. Though it wouldn’t be a particularly notable benchmark in pre-COVID times, only a handful of films have surpassed $100 million domestically in 2021.

“Eternals” declined 61% from its $71 million debut, a drop that falls somewhere in between Marvel’s other pandemic releases, “Shang-Chi and the Legend of the Ten Rings” (which declined 52% in its sophomore outing) and “Black Widow” (which declined 67% in its sophomore outing). “Eternals,” like “Shang-Chi,” is playing only in theaters, whereas “Black Widow” premiered on Disney Plus (for $30 on top of monthly subscription fees) on the same day it opened in cinemas. Internationally, “Eternals” added another $48 million from 49 markets, boosting its tally to $162.6 million overseas and $281.4 million worldwide.

Compared to recent entries in the Marvel Cinematic Universe, “Eternals” hasn’t gotten the best reviews. It is the only installment to receive a “rotten” rating on review aggregation site Rotten Tomatoes, and it’s one of the few to land a CinemaScore grade lower than “A” from audiences. Those factors didn’t affect Sony’s comic book sequel “Venom: Let There Be Carnage,” which has a similar audience score and critic sentiment. However, moviegoers have come to develop much higher expectations (and standards) for Disney’s MCU, a franchise that’s critically and commercially unrivaled.

Speaking of “Venom,” the second feature film that centers on Tom Hardy’s alien symbiote became the second COVID-era release to surpass $200 million at the domestic box office. After nearly two months in theaters, the movie placed at No. 5 with $4 million from 2,538 venues, propelling revenues to $202 million. “Shang-Chi,” which is the highest-grossing film of 2021 with $224 million to date, is the only other film to cross $200 million this year. Globally, “Venom: Let There Be Carnage” has eclipsed $441 million in ticket sales.

In second place on domestic box office charts, Paramount’s family-friendly adventure “Clifford the Big Red Dog” pulled in $16.4 million from 3,700 locations between Friday and Sunday. The film, which is available simultaneously on the streaming service Paramount Plus, got a jump on the weekend by opening in theaters on Wednesday and has generated $22 million in its first five days of release. Based on the popular children’s book series, “Clifford the Big Red Dog” follows 12-year-old Emily Elizabeth, who is gifted a little red puppy that quickly turns into a giant, 10-foot canine. The movie has gotten mixed reviews from critics (it has a 48% on Rotten Tomatoes), but positive reactions from ticket buyers (it has an “A” CinemaScore).

“We know that segments of the family audience are not ready to come back to theaters given where we are with the current state of the pandemic,” said Paramount Pictures domestic distribution president Chris Aronson. “Until vax levels amongst children are more robust, this release strategy is very successful because it gives families a choice of seeing the film in theaters or on Paramount Plus, while also priming the exhibition pump, which we very much believe in.”

“Clifford” had a decent start considering its hybrid release, though analysts believe it would have made even more money by having an exclusive theatrical window before moving to digital platforms. However, family crowds have been slow to return to cinemas because young children have only recently been able to get vaccinated against COVID-19, so Paramount wanted to couch ticket sales while boosting its nascent streaming service in the process. Paramount says “Clifford the Big Red Dog” has been a popular option on Paramount Plus, but the company failed to provide any actual viewership data to back up that sentiment.

“The streaming option is not helping these movies,” says David A. Gross, who runs the movie consulting firm Franchise Entertainment Research. “Without it, their value would be greater on each and every platform.” Still, he says, “this is a very solid opening in the face of difficult family moviegoing conditions.”

“Dune,” the sci-fi spectacle from Warner Bros. and Legendary, placed third with $5.5 million from 3,282 domestic screens. Directed by Denis Villeneuve, the movie has grossed $93 million in North America while playing concurrently on HBO Max. At the international box office, “Dune” collected $6.8 million this weekend, bringing its overseas total to $258 million and its global tally to a mighty $351.2 million.

In fourth place, “No Time to Die” amassed $4.6 million from 2,867 theaters in North America. The latest James Bond installment, featuring Daniel Craig’s fifth and final outing as 007, has earned $150 million in six weeks. With $464 million overseas, “No Time to Die” has crossed $700 million worldwide, becoming only the second Hollywood movie in pandemic times to hit that threshold. The first to crush that milestone was Universal’s action adventure “F9: The Fast Saga,” which tapped out with a strong $721 million globally. Many big-budget Hollywood films, including “Black Widow,” “Eternals,” “Shang-Chi” and “Venom,” haven’t been able to screen in China (the world’s biggest movie market), a factor that has likely prevented those tentpoles from nearing a similar benchmark.

On the independent scene, “Belfast,” a black-and-white autobiographical drama by Kenneth Branagh, managed to secure the No. 7 spot on box office charts. The well-reviewed film collected $1.8 million from 580 domestic venues, translating to $3,111 per location. “Belfast” had the best audience turnout in New York City and Los Angeles, followed by San Francisco and Chicago. Focus will continue to expand the footprint for “Belfast,” an awards season hopeful, in the coming weeks.

“We are thrilled to see audiences embracing ‘Belfast’ as strongly as the festival crowds with […] an “A-” CinemaScore — all great signs to the film’s word of mouth and longevity,” said Focus president of distribution Lisa Bunnell. “Kenneth has created a story of family and home that is exactly what we need right now.”

Though “Belfast” was a formidable contender, Sony Pictures Classic’s documentary “Julia” nabbed the best screen-average of the week among specialty releases. From “RBG” filmmakers Julie Cohen and Betsy West, the story about influential chef Julia Child was able to cook up $20,796 from five screens, amounting to $4,159 per location.

Elsewhere, Neon’s royal drama “Spencer” broadened its theater count to 1,265 venues and generated $1.5 million between Friday and Sunday (averaging $1,211 per location). So far, the movie, directed by Pablo Larraín and starring Kristen Stewart as Princess Diana, has made $4.7 million at the domestic box office.