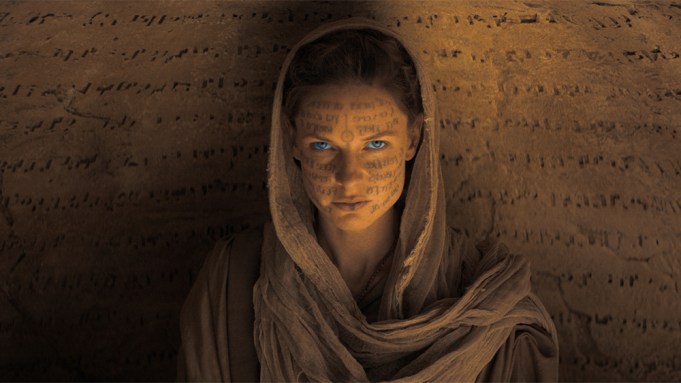 The sci-fi epic, based on Frank Herbert’s seminal novel, had the biggest turnout in China, where the film opened to $22 million, a muted result in the world’s largest movie market. “Dune” also opened this weekend in the United Kingdom ($7.5 million), Korea ($3.4 million), Mexico ($2 million) and Poland ($1.3 million). Those ticket sales pushed “Dune” to $180 million internationally and $220 million globally.

Though “Dune,” starring Timothée Chalamet, Rebecca Ferguson, Oscar Isaac and Josh Brolin, loomed large over the box office (it debuted at No. 1 in North America with $40.1 million), the $165 million-budgeted film has a long road to profitability. Warner Bros. and Legendary backed the film, which premiered day-and-date in theaters and on HBO Max in the U.S. It’s no secret that Villeneuve wants to complete the expected two-part saga about warring interplanetary dynasties, though the sequel has not been greenlit.

Elsewhere, Sony’s comic book sequel “Venom: Let There Be Carnage” crossed a box office milestone, reaching $350 million in global ticket sales. The anti-hero adventure, led by Tom Hardy, continued to lure international moviegoers, adding another $38.3 million from 53 foreign markets. That takes the “Venom” follow-up to $170 million overseas, despite completing only 50% of its international rollout. It opens next in Australia on Nov. 25 and Japan on Dec. 3.

In another box office benchmark, James Bond installment “No Time to Die” became only the second Hollywood film to surpass $500 million globally since the pandemic. The first was Universal’s “F9: The Fast Saga,” which ended its theatrical run with $543 million overseas and $716 million worldwide. “No Time to Die,” which is being released by Universal internationally and MGM in North America, amassed $33 million from 72 overseas markets between Friday and Sunday. That brings its overseas haul to $405 million and global tally to $525 million. The movie, marking Daniel Craig’s fifth and final outing as the suave super-spy, cost $250 million to produce and needs to generate at least $800 million to break even.