‘Dune’ Opens to $40 Million at the Box Office. Strong Enough for a Sequel? 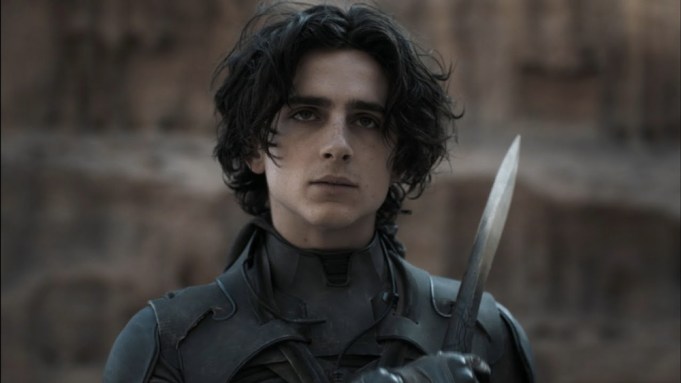 “Dune,” a big-screen adaptation of Frank Herbert’s landmark sci-fi novel, opened to $40.1 million the North American box office. It’s a respectable start given the ongoing pandemic and the Warner Bros. film’s unconventional theatrical debut. In addition to playing in 4,125 domestic theaters, “Dune” (like all Warner Bros. movies in 2021) premiered simultaneously on HBO Max, which might have taken a chunk out of overall ticket sales.

In a milestone for the studio, “Dune” landed the biggest three-day tally for Warner Bros. since the company began its day-and-date strategy on HBO Max. “Godzilla vs. Kong,” which scored a then-pandemic record $31 million in April, previously held that high-water mark. In the months in between, anticipated Warner Bros. movies, such as “The Suicide Squad,” the LeBron James sports comedy “Space Jam: A New Legacy” and the musical adaptation of “In the Heights,” failed to live up to box office expectations while being offered concurrently on the streaming service HBO Max. Warner Bros. plans to return to exclusive theatrical releases in 2022.

At the international box office, “Dune” collected another $47.4 million (including a muted $21 million debut in China), boosting its overseas total to $180 million. The film has grossed $220 million globally to date.

Inaugural ticket sales for “Dune” arrived at the higher end of expectations, which is notable because even before the pandemic upended the movie theater business, such cerebral science fiction adventures have been struggling at the North American box office. “Dune,” in particular, is a property that has been notoriously difficult to adapt. However, director Denis Villeneuve’s version has been well reviewed (it has an 83% on Rotten Tomatoes and notched an “A-” CinemaScore) compared to David Lynch’s 1984 take, which flopped in theaters.

“I’m smiling,” Warner Bros. president of domestic distribution Jeff Goldstein said on Sunday morning. “Exhibitors are thrilled. The best part is, fans are loving what they’re seeing. They’re loving the big-screen experience. It’s been a winner of a weekend for movie-lovers.”

Film critics, including Variety’s Owen Gleiberman, encouraged audiences to seek out “Dune” and its dazzling visual effects on the big screen, and many avid fans of Herbert’s seminal 1965 novel did just that. Premium formats such as Imax, Dolby and 4DX accounted for 50% of domestic ticket sales, with Imax alone contributing $9 million, or 22.5% of the marketshare. It marked the company’s largest opening weekend since the pandemic.

When the studio first announced its hybrid HBO Max plan, Villeneuve was among the most vocally against the decision. “Warner Bros.’ decision means ‘Dune’ won’t have the chance to perform financially in order to be viable and piracy will ultimately triumph,” the filmmaker behind “Arrival” and “Blade Runner 2049” wrote in Variety at the time. “Warner Bros. might just have killed the ‘Dune’ franchise.”

“Dune” is the first chapter in an expected two-part saga, and Villeneuve and the star-studded cast of the movie — including Timothée Chalamet, Rebecca Ferguson, Oscar Isaac and Josh Brolin — have said they would like to make the follow-up feature in order to complete the story about warring political dynasties that clash over access to a vital planet. So will ticket sales be enough to justify a sequel?

Given the film’s hefty $165 million price tag, not to mention the millions spent to market it as a cinematic event, it’s unclear if box office revenues alone will be enough to warrant a return to the desert land of Arrakis. In that case, “Dune” will have to perform very well on HBO Max to convince the studio it should inject another $150 million-plus to complete the star-studded interplanetary tale. Legendary Pictures co-financed “Dune” in addition to producing and developing the movie.

In an interview with Variety this week, WarnerMedia chair Ann Sarnoff said plans for the sequel will be based on “the entirety of what ‘Dune’ can do for the company, including HBO Max.” She added, “The story in itself sets up for a sequel. The production is so amazing and the storytelling is so compelling that it’s not going to be judged on box office alone.”

Also new to theaters this weekend, Disney’s animated adventure “Ron’s Gone Wrong” tanked with $7.3 million from 3,560 cinemas in North America. The family movie, centering on socially awkward middle schooler Barney and his malfunctioning robot friend (Zach Galifianakis), has been well received by audiences (it has an “A” CinemaScore), which could be a promising sign for its theatrical run. Despite playing only in theaters, “Ron’s Gone Wrong” placed fifth on box office charts behind holdover titles “Halloween Kills,” James Bond entry “No Time to Die” and comic book adaptation “Venom: Let There Be Carnage.”

“Launching an original animation film is difficult under any circumstances, and circumstances are difficult right now for family moviegoers,” David A. Gross, who runs the movie consulting firm Franchise Entertainment Research. Since young kids haven’t been able to get vaccinated against COVID-19, family audiences have been less eager to return to theaters compared to other age demographics. He adds: “The movie business is making strides in its recovery, breaking through with strong performances that have been on the level of pre-pandemic box office, but animation is coming back more slowly than the other big genres — superhero, action and horror.”

In a distant second place, Universal’s slasher sequel “Halloween Kills” collected $14 million in its second weekend in theaters, plummeting 71% from its opening. It has generated $73 million in North America to date, a win for the $20 million-budgeted horror film. Already, the studio has announced that franchise star Jamie Lee Curtis will return for the follow-up “Halloween Ends,” scheduled for Oct. 14, 2022.

MGM’s “No Time to Die” landed at No. 3 with $11.8 million, boosting its domestic total to $120 million and its global tally to $525 million. Sony’s “Venom” sequel secured forth place, bringing in $9.1 million between Friday and Sunday. After four weeks, the anti-hero adventure, starring Tom Hardy, has made $181 million in North America and $350 million worldwide.

At the specialty box office, Wes Anderson’s star-studded “The French Dispatch” opened to $1.3 million from only 52 theaters, averaging a strong $25,000 per location. It bested Sony’s comic book adventure “Venom” (averaging $21,300 per theater) and Disney’s superhero adaptation “Black Widow” (averaging $19,400 per theater) for the best theater-average of the pandemic. The film, starring Bill Murray, Chalamet, Frances McDormand, Benicio del Toro, Tilda Swinton and Adrien Brody, did particularly robust business at the Angelika in New York City and The Grove in Los Angeles.

“‘The French Dispatch’ is a jolt of electricity for the specialty box office, delivering record-breaking results in theaters across the country,” said Searchlight Pictures’ senior VP and general sales manager Frank Rodriguez. “These figures show that after a year and a half, arthouse and independent theaters have a superhero of their own in Wes Anderson. What has been doubly encouraging is the crossover results in mainstream theaters hungry for Wes’ 10th film as well. We are thrilled that after several delays, moviegoers said it was worth the wait.”