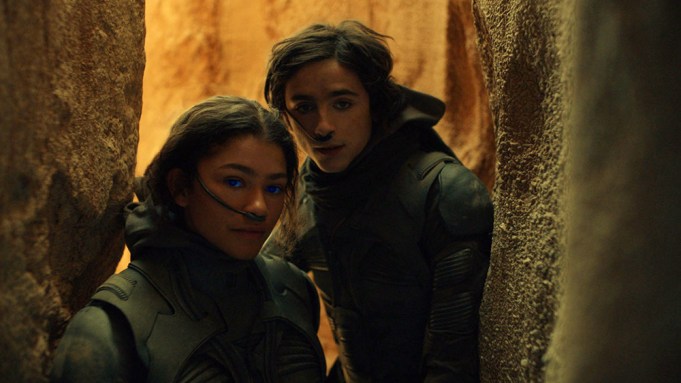 The domestic box office was lighter on the treats and heavier on the tricks during Halloween weekend, capping an otherwise busy October at the movies on a muted note.

Horror movies “Antlers” and “Last Night in Soho” opened nationwide and struggled to scare up strong ticket sales, leaving last weekend’s champion “Dune” to rule over box office charts again. It’s the first time since COVID-19 that people could safely celebrate the spooky holiday, so it’s understandable that audiences opted to trick-or-treat or go to costumed parties rather than visit their local multiplex.

“Dune,” the big-screen adaptation of Frank Herbert’s influential sci-fi novel, generated $15.5 million in its second weekend of release, bringing its domestic total to $69.4 million. The film, which opened simultaneously on HBO Max, declined 62% from its debut, a considerably better hold than other recent Warner Bros. spectacles, such as “Mortal Kombat,” “The Suicide Squad” and “Space Jam: A New Legacy.” Those movies all but collapsed in their second weekends, respectively plunging roughly 70% while playing day-and-date on streaming. For “Dune,” most of the marketing has hinged the idea that fans need to watch the movie in the best possible quality, which is to say it demands to be seen in theaters. Patrons have been responding to that sentiment, as evidenced by robust Imax ticket sales. The premium format has delivered $4.2 million in revenues between Friday and Sunday and $17 million of “Dune’s” overall domestic tally.

Globally, “Dune” is nearing the $300 million mark, with international box office receipts at $222 million. Warner Bros. and Legendary, the companies behind “Dune,” have already announced that director Denis Villeneuve — and stars Timothée Chalamet, Rebecca Ferguson, Oscar Isaac and Zendaya — will return to Arrakis for a sequel.

The Focus Features film “Last Night in Soho” and Searchlight’s “Antlers” will battle for sixth place, with each film collecting a tepid $4.2 million over the weekend. Those figures could vary slightly when final numbers are tabulated on Monday. Either way, it’s an unenviable spot for new nationwide releases. “Last Night in Soho” had a slightly larger theater count, playing in 3,016 venues compared to “Antlers” in 2,800 locations.

Directed by Edgar Wright (“Baby Driver,” “Shaun of the Dead”), the mostly well-reviewed “Last Night in Soho” follows an aspiring fashion designer who finds herself transported back in time to 1960s London in the body of a night club singer. Starring Thomasin McKenzie and Anya Taylor-Joy, the movie secured a “B+” CinemaScore from ticket buyers. “Antlers” received worse grades. Produced by “The Shape of Water” filmmaker Guillermo del Toro and featuring Keri Russell as a small-town school teacher attempting to uncover a dangerous secret about one of her students, “Antlers” missed the mark with moviegoers and landed “C+” CinemaScore, which doesn’t bode well for its theatrical prospects.

“Psychological horror movies generally do less business than the blood-gore-shock variety,” he said. “Late October is the scary season, but with the holiday falling on the weekend, Halloween activities [and] social events are conflicting with moviegoing.”

Still, in a surprising twist, “Last Night in Soho” and “Antlers” opened behind “My Hero Academia: World Heroes’ Mission,” the third entry in the popular anime series. From Funimation Films, the PG-13 movie has amassed $6.4 million from 1,602 screens over the weekend, enough for fourth place. “World Heroes’ Mission” is the sequel to 2020’s “My Hero Academia: Heroes Rising,” which launched to $5.8 million right before the pandemic hit and ended its theatrical run with $13.3 million. That film’s box office potential was cut short because two weeks after “Heroes Rising” opened, movie theaters across the country were forced to shutter to help stop the spread of COVID-19. The latest installment has been well-received, with an 80% on Rotten Tomatoes from critics and 95% on Rotten Tomatoes from audiences.

Despite the newcomers to movie theater marquees, cinephiles craving a fright opted to watch Jamie Lee Curtis return as the avenging Laurie Strode in “Halloween Kills.” The Universal Pictures film finished the weekend in second place, with $8.5 million from 3,616 theaters. After three weekends on the big screen, “Halloween Kills” has grossed $85.6 million in the U.S. and Canada. It’s a solid result considering the slasher sequel premiered concurrently on Peacock, the streaming service owned by NBCUniversal.

In third place, MGM’s James Bond movie “No Time to Die” drummed up $7.8 million from 3,507 venues. So far, the 007 adventure — featuring Daniel Craig’s fifth and final outing as the suave secret agent — has made $133 million in North America. Internationally, “No Time to Die” has generated $472 million, pushing its global ticket sales to $600 million, a robust figure for pandemic times.

At the No. 5 spot, Sony’s comic book adventure “Venom: Let There Be Carnage” brought in $5.7 million from 3,278 theaters in its fifth outing. With $190 million in domestic ticket sales to date, the “Venom” follow-up is the second-highest grossing movie of the year behind Marvel’s “Shang-Chi and the Legend of the Ten Rings” ($221 million).

Elsewhere at the domestic box office, Wes Anderson’s twee dramedy “The French Dispatch” expanded to 788 venues, where the star-studded film posted $2.8 million over the weekend. Domestically, it has earned $4.6 million after 10 days of release.