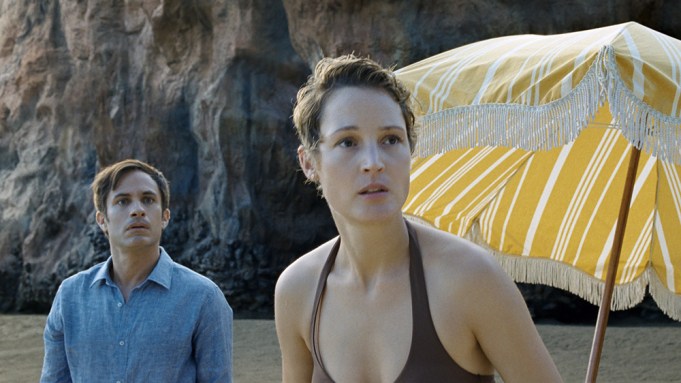 In a twist fitting for an M. Night Shyamalan thriller, “Old” is the No. 1 movie at the domestic box office with $16.5 million in ticket sales.

Heading into the weekend, reigning champ “Space Jam: A New Legacy” and fellow newcomer “Snake Eyes” were projected to lead North American charts. Instead, “Space Jam 2” had a huge decline from its opening weekend and “Snake Eyes” fell slightly short of expectations, leaving “Old” to slither to a surprising first place finish.

It may not be the kind of pull-the-rug-out-from-under-you, leave-your-jaw-on-the-floor style finale favored by “The Sixth Sense” filmmaker, but it does demonstrate how wild and unpredictable the box office can be as it tries to recapture momentum during the pandemic and grapples with new hybrid distribution strategies. Stability won’t return anytime soon. New variants of COVID-19 have been driving a spike in infections, recently forcing Los Angeles, the country’s top moviegoing market, to reinstate its mask mandate. David A. Gross, who runs the movie consulting firm Franchise Entertainment Research, says the Delta variant presents a setback for not just the film industry, but the world.

“With only half of the U.S. fully vaccinated and the pace of shots at around half a million per day, the business can operate profitably, but full strength is going to take more time now,” Gross says.

For movie theater operators, it helped that this weekend’s two new nationwide releases — Universal’s “Old,” a horror story about a family vacationing at a beach that causes them to age rapidly, as well as Paramount’s “Snake Eyes,” a “G.I. Joe” origin story starring Henry Golding — are only playing in theaters. That’s a deviation from the release strategy deployed by other summer movies, including Disney’s “Black Widow” (also on Disney Plus for an extra fee) and Warner Bros.’ “Space Jam: A New Legacy” (on HBO Max at no additional cost to subscribers). “Snake Eyes” is moving to Paramount Plus 45 days after its theatrical debut, while “Old” will have a traditional home entertainment release.

“Snake Eyes” opened in second place with $13.3 million from 3,521 locations. It didn’t fare much better overseas, grossing $4 million from 37 markets (29% of its international footprint). That’s a disappointing start for a movie that cost $88 million to produce and hails from a well-known property. It didn’t help that the PG-13 rated “Snake Eyes” was greeted with weak reviews and a “B-” CinemaScore from audiences. “Old” arrived with an even worse reception from moviegoers — it landed a “C-” CinemaScore — but Shyamalan’s signature twist endings can benefit from a communal viewing experience. Plus, “Old” has generated significant social media chatter and has gotten the meme treatment online.

At the international box office, “Old” pulled in $6.5 million from 23 overseas territories for a $20 million global start. That haul represents Shyamalan’s lowest opening weekend in history, but the director behind “Unbreakable” and “Split” self-finances his films with modest budgets meaning they don’t have to break records to become profitable. “Old” carries an $18 million price tag.

Jim Orr, Universal’s president of domestic distribution, says he expects “Old” to have a long life in theaters.

“M. Night Shyamalan” has an incredible track record,” Orr says, giving a nod to the studio’s marketing team. “And these can be difficult film to market because you don’t want to give away too much.”

Perhaps almost as surprising as a Shyamalan-esque third act is the outright collapse of “Space Jam: A New Legacy.” The live-action/ animated sports comedy featuring LeBron James fell to fourth place with $9.5 million in its sophomore outing, marking a brutal 69% decline from its $31 million opening weekend. The sequel was tracking to make $15 million to $18 million between Friday and Sunday, which would have been a standard 45%-50% drop. Films geared toward family audiences, such as “Space Jam,” have been holding exceptionally well during the pandemic, but its hybrid release on HBO Max, along with mediocre reviews, likely cut into ticket sales.

“Space Jam” came in behind the Scarlett Johansson-led Marvel adventure “Black Widow,” now in its third weekend of release. “Black Widow” added another $11.6 million from 4,250 locations, bringing its domestic tally to $154 million in the U.S. and Canada. Though that’s a notable result during the pandemic, it’s a much lower total than recent installments from the Marvel Cinematic Universe.

Universal’s “Fast & Furious” sequel “F9” is rounding out the top five on box office charts, adding $4.7 million in its fifth weekend in theaters. The film has made $163 million in North America to date. After more than a month on the big screen, “F9” has become the first Hollywood movie to cross $600 million worldwide since the onset of pandemic.

Elsewhere on box office charts, Mark Wahlberg’s biographical drama “Joe Bell” landed in 11th place with $707,184 from 1,094 locations. Though critics dismissed the Roadside Attractions film with a 37% Rotten Tomatoes average, the select moviegoers that opted to see “Joe Bell” seemed to enjoy it. It has an 80% audience average on Rotten Tomatoes.