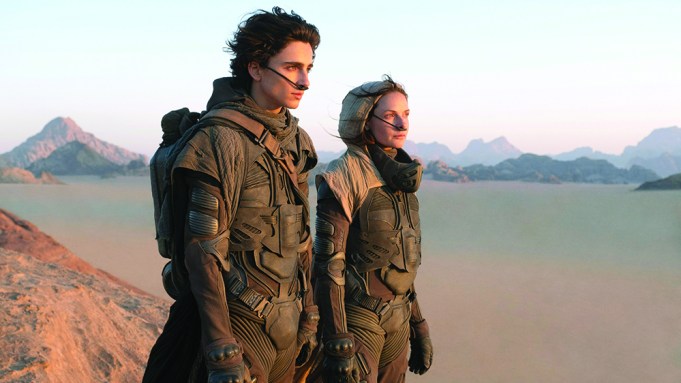 North American audiences are seeing the spice flow on the big screen. Warner Bros. and Legendary’s “Dune” is expected to open at the top of the domestic box office, targeting a $33 million opening weekend haul. Other industry projections have the film opening as highly $39.1 million.

The studios’ adaptation of Frank Herbert’s seminal science-fiction novel of the same name launched to $17.5 million on Friday. “Dune” has generally earned auspicious reviews from critics, and the movie-going public is responding well too — the film landed an “A-” CinemaScore rating, indicating strong approval from audiences.

Warner Bros. has also debuted “Dune” simultaneously on HBO Max as part of a year-long strategy. The studio is releasing its entire theatrical slate day-and-date on its streamer as a means of bolstering subscription numbers and accounting for the muted box office of the pandemic era. The decision for a hybrid release of “Dune” was met by derision from director Denis Villeneuve in a Variety guest column in Dec. 2020.

Though its HBO Max release may be softening “Dune’s” impact at the box office, WarnerMedia chair Ann Sarnoff indicated to Variety that the studio will take HBO Max viewership numbers into account in its decision to back a sequel. “Dune” had also already grossed $130 million from international markets heading into the weekend.

Headed for a fifth place showing is “Ron’s Gone Wrong,” the weekend’s other major wide release. Disney and 20th Century’s animated film opened to $2.3 million on Friday and is projected to draw a muted three-day haul of $7.07 million. The film fell under Disney’s umbrella through the company’s acquisition of 21st Century Fox in 2019. Since then, “Ron’s Gone Wrong” has faced numerous delays due to the COVID-19 pandemic. Zach Galifianakis stars as the voice of Ron, a malfunctioning robotic buddy, alongside Jack Dylan Grazer, Ed Helms, Justice Smith, Rob Delaney, Kylie Cantrall, Ricardo Hurtado and Olivia Colman.

The sophomore outing of “Halloween Kills” is the projected box office runner-up. Universal Pictures, Miramax and Blumhouse’s horror sequel is projected to earn $14.23 million in its second weekend, marking a sharp 71% drop from its opening haul. For comparison, 2018’s “Halloween” fell 58.8% in its second weekend. The heavier drop could be a result of a less enthusiastic response from critics and audiences — the 2018 entry earned a “B+” CinemaScore, while “Kills” landed a “B-” — but also likely is that the film is weathering the effects of a hybrid digital release. In addition to theaters, “Halloween Kills” is available to view on NBCUniversal’s streaming service Peacock.

MGM and UAR’s “No Time to Die” looks to take bronze. Daniel Craig’s final outing as James Bond is projected to earn $11.81 million in its third weekend and reach a total domestic haul of $120 million. The 007 entry crossed the $100 million mark at the domestic box office earlier this week, an achievement that only seven other releases have reached in 2021.

“Venom: Let There Be Carnage” is projected to land at fourth. Sony’s follow-up featuring the Marvel Comics antihero earned $2.43 million on Friday. The symbiote sequel looks to reach a $181.5 million domestic haul after the weekend. “Venom” is continuing an impressive box office run that kicked off with a $90.1 million three-day opening, the largest domestic box office debut of the pandemic era.

Also opening this weekend in limited release is Searchlight Pictures’ “The French Dispatch.” Wes Anderson’s newest film garnered $550,000 on Friday from 52 theaters, heading for a projected weekend of $1.62 million. Should industry estimates hold, the release would easily land the highest per-theater average gross since the platform release of 2019’s “1917.” Disney and Searchlight will give the film a nationwide release next week.