Could ‘Trial of the Chicago 7’ Only Win Best Picture at the Oscars? 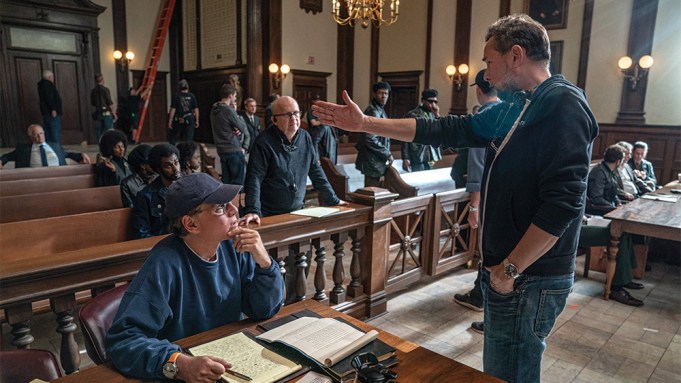 The Oscars could have some interesting surprises pop up at the ceremony on April 25, even in the best picture race. Given the unprecedented nature of the season and the assumption that many AMPAS voters sat out the nomination phase of voting, a couple of upsets may await. One of which could be “The Trial of the Chicago 7” only winning best picture.

The historical drama, written and directed by Aaron Sorkin, has long been considered one of the potential spoilers to Chloé Zhao’s “Nomadland,” which has been steamrolling its competition most of the awards season. After the Netflix drama failed to score a director nod for Sorkin, all hope seemed to be lost, especially after factoring in its losses from the WGA (losing to “Promising Young Woman”), DGA and PGA (losing to “Nomadland”). However, the film got a nice bump from the SAG Awards, picking up the cast ensemble prize. “Trial of the Chicago 7” could follow the winning turns of films such as “Crash” (2005), “Spotlight” (2015) and, most recently, “Parasite” (2019), all former Oscar victors that only won a SAG Award.

Netflix — at 35, the studio with the most nominations — has been passionately pursuing its first best picture win for a few years now, after coming up short with “Roma” (2018) and “The Irishman” (2019). It may be able to make history in some other ways. For example, the streamer’s “Ma Rainey’s Black Bottom” could become the first film to win best actor Oscars for its leads, Chadwick Boseman and Viola Davis, without being nominated for picture.

Only three films have been named best picture, with no other wins on Oscar night: “The Broadway Melody” (1929), “Grand Hotel” (1932) and “Mutiny on the Bounty” (1935). The lowest winning tally for a winner since then has been two. “Spotlight,” most recently, won best picture and original screenplay for Tom McCarthy and Josh Singer. “Grand Hotel” from director Edmund Goulding was famously nominated for just one award and won, interestingly making it just one of six films to have a “clean sweep” on Oscar night. The other pics are “Wings” (1927), “It Happened One Night” (1934), “Gigi” (1958), “The Last Emperor” (1987) and “The Lord of the Rings: The Return of the King” (2003).

With the preferential ballot in play for the final round of voting, Sorkin’s film could excel with AMPAS members, generating many number twos and threes on ballots. Netflix’s other feature, David Fincher’s “Mank,” which racked up the most nominations with 10, could be one of the first films to be “eliminated” as the redistribution of ballots occurs. Many speculate the two Netflix features could be joined together on those ballots, giving “Trial of the Chicago 7” the edge and getting it to the 50%-plus-one required to win the Oscar for best picture.

It’s worth noting that Sorkin’s film is competitive in a few of its nominated races. Supporting actor hopeful Sacha Baron Cohen is a double nominee and has an adapted screenplay nom for co-writing “Borat Subsequent Moviefilm.” He’s long felt like the possible upset to favorite Daniel Kaluuya, who plays Fred Hampton in “Judas and the Black Messiah.” With his co-star Lakeith Stanfield shockingly nominated alongside him, the votes could be split, letting Cohen emerge victorious. No actor in the modern era has lost the Oscar after winning BAFTAs, Critics Choice, Golden Globes and SAGs.

Sorkin hopes to push past Emerald Fennell in original screenplay, as he has a noteworthy win from the Golden Globes. In four of the last five years, however, the Globe winner had lost the Oscar — one of whom was Sorkin himself, when he failed to get nominated for “Steve Jobs” (2015) in adapted screenplay. The editing by Alan Baumgarten could be a spot for some momentum as the Academy has been attracted to quick cuts in the past few years, with “Whiplash” (2014), “Bohemian Rhapsody” (2018) and “Ford v Ferrari” (2019) as examples.

Could we see a one-win shocker in the top category? In the longest and strangest awards season ever, anything is possible.