The Golden Globes have sounded off with the first big take on the film year that has included anything but stability and normalcy. Netflix ruled the nominations day as expected with 22 nods for the film side, with David Fincher’s “Mank” leading with six. Aaron Sorkin’s “The Trial of the Chicago 7” was also right behind with five with Emerald Fennell’s “Promising Young Woman,” Florian Zeller’s “The Father” and Chloé Zhao’s “Nomadland” nabbing four apiece.

But what does it all mean to the larger Oscar conversation? Especially with the more important and telling SAG Awards announcing Thursday, could this all be a momentum builder or a “voter cooler” for would-be contenders seeking Academy recognition? With more than a month left until Oscar voting begins, this all could mean nothing in the grand scheme of awards recognition. Academy members have always marched to their own drum, and based on many conversations with AMPAS members, they seem just to be looking for a template to watch films but have their own opinions on what is or is not in the running.

Down below, you can find the final Golden Globe nomination predictions in all the film categories. 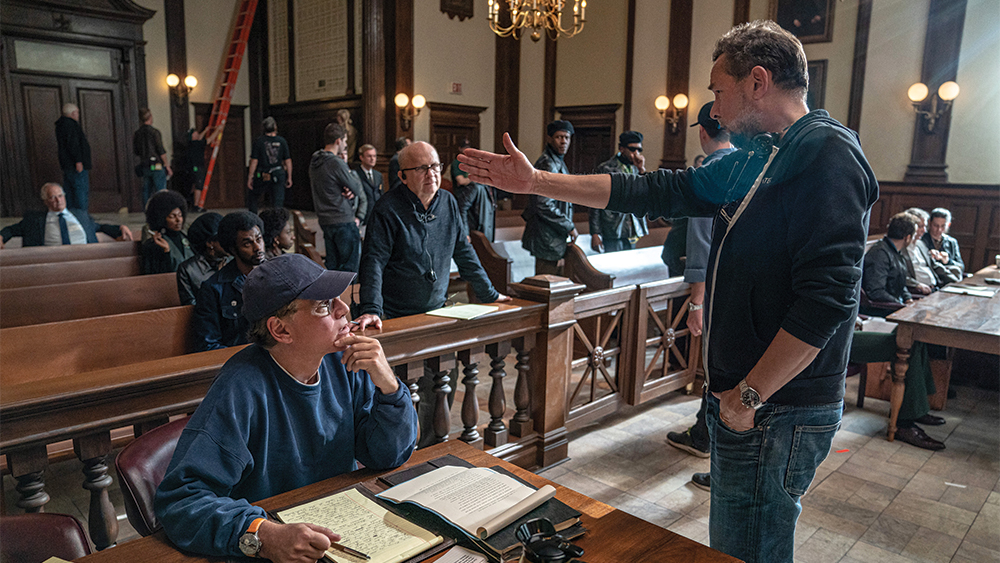 “Mank” led the fray, but I wouldn’t call it the frontrunner in this category at the moment. “The Trial of the Chicago 7” had a strong day. Even if the season seems preordained for “Nomadland” to take it all, the Globes have been notorious for choosing an alternate option in these scenarios — examples being “Atonement” over “No Country for Old Men” or “Babel” over “The Departed.” “The Father” makes a roaring comeback, and with BAFTA voting on the horizon, somewhere it should perform very well, this could be a “Darkest Hour” situation where it makes a last minute surge. The big misses were any film with a predominant cast of people of color. “Da 5 Bloods,” “Ma Rainey’s Black Bottom” and “One Night in Miami” all failed to make the cut, which is just a bad look for the HFPA, especially considering the controversy surrounding “Minari” having to compete in foreign language, which was the only place it showed up. There’s a lot to discuss in their annual post-mortem meeting.

The near shutout of “On the Rocks” was a huge blow to A24 and Apple TV Plus, the film’s distributor. The inclusion of Sia’s “Music” seems to fall in line with normal HFPA behavior attracting the celebrity of a film, rather than the quality (i.e., “The Tourist”). With that said, a respectable four films emerged alongside, including “Hamilton,” which is not eligible for the Academy. “Borat Subsequent Moviefilm,” which seems to be frontrunning in its two acting categories, might be the leader here as well, but “Palm Springs” has executed a strong campaign thus far and is eyeing a nomination in best original screenplay. This could be a dark horse.

PREDICTION TALLY: 4/5 (missing “The Croods: A New Age” for “The Willoughbys”)

There are no shocks or surprises in this category, and although “The Croods: A New Age” was an alternate pick, there are quite a few films submitted for the Academy Awards but were not for the Globes. Twenty-seven films will fight for a spot, in relation to the 17 that the HFPA considered. Will this default to the precursor leader “Soul,” or is this the moment where “Wolfwalkers” turns the tide?

This is always one of the tricky ones to predict as the HFPA doesn’t follow the country submission guidelines of the Academy. Neither of the big films from Mexico, “I Carry You With Me” or “I’m No Longer Here,” found love. Expect the international feature frontrunner “Another Round,” “La Llorona,” and “Two of Us” on the Oscars shortlist when it’s announced on Feb. 9. “The Life Ahead” was not the selection for Italy, and “Minari” is an American film, made in America, by an American — to remind the people in the back.

The scream of horror and pain heard early this morning were devoted film lovers expressing themselves when Delroy Lindo’s name was not called for his powerhouse performance in “Da 5 Bloods.” While they messed in one spot, they made up for in others with the inclusion of Tahar Rahim, who is incredibly moving in “The Mauritanian,” and could be a factor come time for the BAFTA nominations. This also marks the first time that two Muslims have been nominated in the same category with Rahim and Riz Ahmed. Even with the strong day for “Mank,” the inclusion of Gary Oldman is surprising, considering they have only nominated him for “Darkest Hour.”

Another place that didn’t offer any big surprises. Despite the #FilmTwitter backlash, James Corden found his way into the lineup, which further proves the point about internet noise versus voters’ thoughts. Miranda made the cut over his co-star Leslie Odom Jr, which, based on the showing for “Music,” he probably split votes with himself, leaving him out of the lineup. Sacha Baron Cohen won this award for 2006’s “Borat.” He’s the first actor since Johnny Depp (“Pirates of the Caribbean: Dead Man’s Chest”) to be nominated for a sequel performance, which coincidentally happened the year Cohen won. If Cohen manages to win, he would be the first to win for a sequel and its predecessor in the category’s history. Also worth noting that Cohen tied the record with Jamie Foxx as receiving the most Globe nominations in one day with this, supporting actor and as one of the producers of “Borat 2.”

Such a competitive race this year, and even with predicting the nominees, Sophia Loren (“The Life Ahead”) and Zendaya (“Malcolm & Marie”) were probably right in the thick of it. Considering the great day for “Promising Young Woman,” Mulligan may have solidified the belief that she’s the frontrunner. Still, we can’t discount Davis or McDormand, who both have their admirers with multiple nominations and wins from the HFPA.

Kate Hudson really came out of nowhere and was probably the jaw-dropper of any category’s film nominees. With the most Golden Globe nominations in history, it’s baffling that Meryl Streep was passed over for “The Prom,” leaving Corden as the only representation. It could be a case of vote-splitting as she was also in the mix for Steven Soderbergh’s “Let Them All Talk.” Anya Taylor-Joy is the only Latinx actor to be recognized, a travesty in itself, but happy to see the representation. Bakalova and Pfeiffer look to be the battle that will ensue. The former will only help her supporting actress run since that’s where Amazon is campaigning her, while Pfeiffer will hope a win can give her a boost to break up the deep bench of drama actress contenders.

The nomination for Jared Leto’s performance in “The Little Things” is the “Globe-iest” thing they could ever do, that it’s infuriating that most of us didn’t see it coming. Mirroring a similar nomination that happened for Aaron Taylor-Johnson for “Nocturnal Animals,” who then surprisingly won and then failed to get nominated for an Oscar, it seems right on brand. Not sure if Leto will have the same trajectory as Baron Cohen, Kaluuya and Odom have made this a very competitive three-horse race. Bill Murray is a Globe favorite and became the only representation for “On the Rocks,” but based on the buzz, it could be his final stop. Paul Raci’s miss for “Sound of Metal” was not surprising in the slightest as they tend to pass over the “less famous” often enough, even if they are leading with critics. SAG may bring him back into the mix, and Boseman is the most daunting question afoot if he will be a double nominee or not.

No better way to say it other than the Yuh-Jung Youn snub for “Minari” is embarrassing. This will give Colman and Seyfried a nice leg up because this feels like a race between those two for the Globe. Depending on where SAG falls, perhaps this is a bit more fluid as Maria Bakalova still needs to be considered. Every season we have the classic contenders that receive Globe, SAG and BAFTA nominations but fail to garner Oscar (past examples like Daniel Brühl in “Rush” and Idris Elba in “Beasts of No Nation”). Contenders like Close and Foster fit the description of such a feat, but anything can happen with more than a month to go.

The women outnumbered the men, and it was amazing to see. We predicted there would be a lone director in the mix, and we got that with Regina King. Zhao is the one to beat, but again, as the Globes can do, even when everyone knows that Joel Coen and Ethan Coen are going to win for “No Country for Old Men,” they give us a winner in Julian Schnabel for “The Diving Bell and the Butterfly.” Even further, they’ve chosen Scorsese (“Hugo”) over Hazanavicius (“The Artist”) or Cameron (“Avatar”) over Bigelow (“The Hurt Locker”). That could be good news for Aaron Sorkin or David Fincher.

One of the weirdest facts is Academy Award winner Christopher Hampton’s second nomination from the HFPA. The 75-year-old has never won, and his only other nomination is for 2007’s “Atonement” and was snubbed for his Oscar-winning script “Dangerous Liaisons.” Two female screenwriters are represented in this category, which doesn’t happen very often. In the last 20 years, only three years represent two or more films having women as their scribes (2003, 2009 and 2017). The love for Sorkin continues, proven with his dual nominations. Having been nominated for every feature screenplay, he’s written (except for “Malice”). With two previous wins for “The Social Network” and “Steve Jobs,” the latter did not result in an Oscar nomination. he could be in line for his third.

PREDICTION TALLY: 4/5 (missing “The Midnight Sky” for “The Trial of the Chicago 7”)

The HFPA loves both Alexandre Desplat and Daniel Pemberton, and they opted for the latter to have one nomination in song. Even with Desplat as the alternate pick in predictions, his bombastic score could still be the one to beat, depending on how well the film does on Oscar morning. This could be the final Oscar lineup, but there’s still plenty more to consider, like Terence Blanchard (“Da 5 Bloods”), Emile Mosseri (“Minari”) and Academy favorite Elliot Goldenthal (“The Glorias”). Also unsure if Reznor and Ross pull the double nomination on the morning, so we’ll keep an eye on a potential split for them to occur.

PREDICTING TALLY: 4/5 (missed “The United States vs. Billie Holiday” for “The Outpost”)

Andra Day pulls a double nomination for herself, and it’s one of the nominations that, when you look at it, makes perfect sense. Let’s see if this begins the overdue train for Diane Warren for “Io Si (Seen)” or if Leslie Odom Jr gets love here instead of supporting actor for “Speak Now.” It also looks like a category that could be the Oscar lineup, but it’s never this easy.