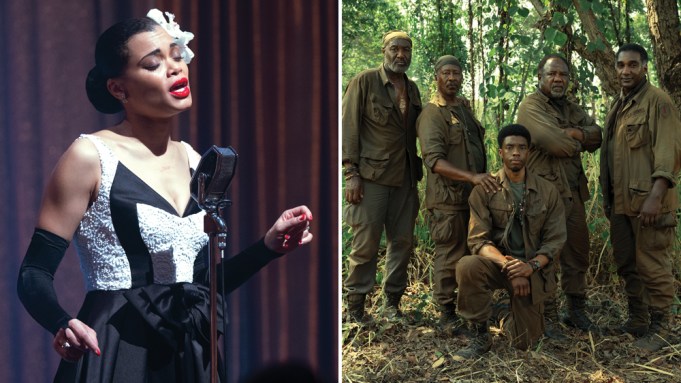 The cost of awards campaigning has reached an all-time high, even in a pandemic year.

We’re not just talking in terms of dollars and cents. The long slog was extended by months after the Oscars’ airdate was pushed from early February to late April, making the quest to land those big statuettes a brutal endurance contest. One junior publicist griped that they were so exhausted that it was hard to summon the energy “to do something as fucking simple as reply yes to an email.”

But the journey isn’t the only reason that Hollywood will exhale heavily once the last Oscar has been handed out on Sunday.

This year’s awards season has forced the sages to toss out their playbooks. Beyond that, it’s also meant changing the way strategists assess every beat of the horse race. That’s been made more difficult at a time when most awards voters are watching movies at home on screeners rather than gathering for showings, premieres or Q&As with top talent. For a lot of the season, studios were flying blind.

Strategists and executives typically have an internal postmortem following a campaign season, asking questions like “Should we have gone lead instead of supporting for this actor or actress?” or “Should we have skipped the festivals?” This year has far too many what-ifs to consider. How does one learn from a year when campaigners were writing the playbook as they went along? It’s not like the old ways of launching a film into best picture contention were applicable considering that movie theaters were largely closed or operating at reduced capacity and people were prohibited from gathering in groups. Just as the recent presidential election encountered headaches stemming from faulty polling, awards teams struggled with the unreliability of the data they were amassing.

“It wasn’t just Zoom fatigue, which was definitely a factor,” one junior publicist shares. “I would call a voter, and they didn’t want to talk about the movies. They were telling us what we wanted to hear so the call could end.”

The Academy of Motion Picture Arts and Sciences has gone increasingly global. Because of travel restrictions, it was harder to gather voters together, and outreach was tougher to pull off. Some foreign members answered emails or phone calls, but many ignored all forms of communication, making it difficult to gauge not only what they thought of a particular movie but if they’d even gotten around to watching it.

In the middle of the pandemic, the Academy announced changes to its eligibility requirements for best picture, allowing films to debut on a streaming platform or in the online Academy Streaming Room for members. Along with that concession to the obstacles to movie distribution in the COVID era, the organization also extended eligibility from Dec. 31, 2020 to Feb. 28, 2021.

Picture nominees “The Father” and “Judas and the Black Messiah,” both of which hit theaters in February, benefited from the extended timeline, as did best actress contender Andra Day, whose “The United States vs. Billie Holiday” debuted on Hulu that month. That meant these films were getting reviewed and discussed as Oscar voters were putting the finishing touches on their ballots, helping them surge into contention at an opportune time.

But the 14-month Oscar season was an albatross for many critically heralded films, such as Spike Lee’s “Da 5 Bloods” and Kelly Reichardt’s “First Cow,” which were released in the spring or summer and left the public consciousness in the ensuing months. Neither film managed to snare a major nomination. Of this year’s best picture nominees, “The Trial of the Chicago 7” was the earliest release, having premiered in theaters on Sept. 25 before streaming on Netflix on Oct. 16.

Marketing executives reinvented the campaign wheel, thinking of dozens of ways to reach voters and consumers alike while lacking the kind of concrete data they had come to rely on to see if their strategies were effective. “You don’t know what you don’t know,” one major studio executive says. “I’ll be honest: Our slate had a decent showing, but I still can’t tell you which or if any of our plans worked.”

So where does Oscar campaigning go from here?

The Academy has yet to announce when the 2022 ceremony will take place or what the eligibility cutoff will be. That’s put studios and strategists in a holding pattern as they try to game out the coming year of plaudit hopefuls.

“The Board and the Academy have been and will continue to do an in-depth review and analysis of the addendums and all the temporary changes that were adopted in 2020,” says a source within the Academy. “We have to see what is still applicable now in 2021 versus where we were last year.”

At the moment, most studios and awards whisperers are looking forward to much-needed breaks from screening rooms and interviews, magazine profiles and television sit-downs. It has been an awards season like no other, a marathon run against stiff headwinds and on punishing terrain. Finally, however, the finish line is in sight.