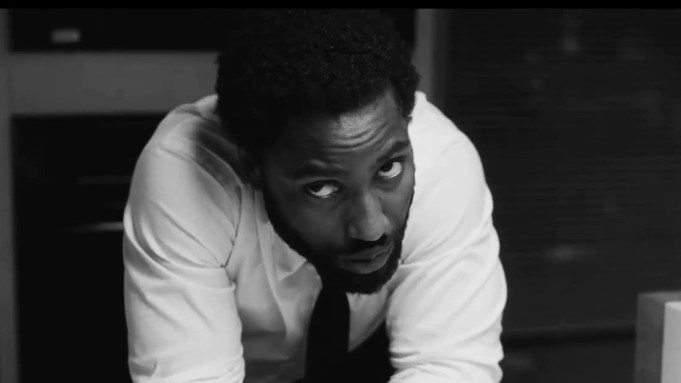 John David Washington has been one of the hottest talents in the past few years. The 36-year-old actor emerged on the scene in a major way with Spike Lee’s “BlacKkKlansman,” for which he was nominated for a Golden Globe and Screen Actors Guild Award for best actor. With “Malcolm & Marie,” he doesn’t just cement his placement in the Hollywood industry as one of our most gifted actors working today, but also takes up the responsibility as a producer.

This year, Washington took on the action genre with Christopher Nolan’s “Tenet,” and is now bookmarking his enduring year with a tense and career-best turn opposite Zendaya in Sam Levinson’s relationship drama. It’s a turn that has put him in the thick of a very competitive Oscar race for best actor. If nominated, he would be the second Black producer to be nominated for acting and best picture, following his father, Denzel, when he was nominated for “Fences” in 2016. Washington would also be the youngest Black producer ever nominated, alongside Zendaya, who also could be the youngest producer in Oscars history.

Variety sat down for an exclusive first interview with John David Washington about the film and his set experiences, especially during the COVID-19 pandemic. He also shares some of his inspirations, favorite films, and which filmmakers he’s dying to work with in the industry.

Why did you choose to do “Malcolm & Marie” at this point in your career, in the middle of a pandemic?

John David Washington: For one, I love to act. I love writing, but especially because of the time we were in. I get this script and a call from Sam, and he starts reading me the dialogue between Malcolm and Marie for about 10 pages. I couldn’t believe it. It was beautiful words I heard, and at the same time very disturbing with visceral confrontations. I started getting anxious and nervous because I don’t hear any stage direction. I get nothing but dialogue.  So I’ve heard all these words, and I said, “I love it, but can I read the thing?” And Sam said, “No, not yet.” And he hangs up [laughs].

I just knew I had to do it. It was something I desperately needed artistically. I had all these feelings and anxiety, with this concern about my future. My usual outlet for those things is work. So it’s was perfect, and I said, “when do we start?”

What did it feel like filming during a pandemic?

Washington: I felt comfortable. I felt safe. But I felt the need to do this so much that I was willing to risk it. We were in the facility, on a ranch, which was this beautiful resort, with plenty of space. Everybody had their own cabin; we had to get tested before we got there. We got tested when we got there. And then we tested a day before we checked in. Nobody was on the ranch except for us. So as long as nobody left the facility, I felt safe.

Can you speak about the criticism regarding the age difference between you, 36, and Zendaya, 24?

Washington: I wasn’t concerned about it because she is a woman. People are going to see in this film how much of a woman she is. She has far more experience than I do in the industry. I’ve only been in it for seven years. She’s been in it longer, so I’m learning from her. I’m the rookie. I was leaning on her for a lot. Some of the stories she’s shared about what she’s had to go through with Twitter and everything. I appreciated her wisdom and discernment when it comes to this business. I admire that. What I’m really excited for people to see when the film is released – they’re going to see how mature she is in this role. We’re talking about versatility, and Sam and Zendaya brought both.

What would you be doing if you weren’t an actor?

Washington: Perhaps a psychiatrist. I was a sociology major and enjoyed it. Coaching or maybe teaching. It still could happen, by the way, you never know.

How did it feel working with Christopher Nolan on “Tenet,” which came out this year?

Washington: That was one of those moments in my life where I couldn’t believe how my life is going.  He’s one of the greatest of all time, and this is one of those once in a lifetime opportunities. It was surprising how down to earth he is. He’s operating on another level, just intellectually speaking, but he can also shoot the shit. He likes all kinds of things and films. So I loved every moment of it. He trusted me with the material, and I’m forever grateful.

Is there any aspect of Malcolm that felt personal to you, and had you draw from your own past relationships?

Washington: I can’t relate to the back and forth with the significant other. Those aren’t my tactics. I don’t like confrontation, I like to use my words and be clear, and I don’t like to yell. I’ll say this, and I’m not going to get into details because it’s too private. But there are a couple of things that were triggering. A couple of moments where I found myself truly lost in the emotion and where I was going. Some things started brewing up that I was grateful to use but didn’t realize they were in there, in my spirit. And in some ways, it was therapy to get it out in that way. I’ve heard this word thrown around during these interviews and Q&A’s – “villain” – I heard it and said, “not a villain.” I don’t think he’s a villain, but “it’s receipt time” during the back and forth.

Can Zendaya make good macaroni and cheese, which is featured in the movie?

Washington: Shout out to my man Jose who made the mac and cheese on set. I got to give him credit. I definitely threw up at the end of the day because I was really eating that stuff—a lot of it. I did like seven takes with full bowls, and as you see. I’m like an animal. I found myself dieting, trying to be sexy and cute. And I had to do a scene with my shirt off right after, with the sun coming up, and I said, “C’mon Sam! I’m trying to be sexy. Malcolm has abs. Help me out, Sam.” [laughs]

Washington: “Tales from the Hood.”

What’s the one actress you wish you could work with, but they’re no longer alive?

What is the movie that makes you laugh until you cry?

Washington: “Coming to America.” Every time.

What is the movie that makes you “ugly cry.”

Do you ever want to direct a movie?

Washington: Yes, but then no, because it would be terrible. I would want it to be on a certain level and then get discouraged. Writing [a movie], yes.

If you had a time machine and could go back to any date in history, where would you go and visit?

Washington: The day that my mom found out she was pregnant with me. I would tell her, “you could wait a couple of years, get on stage, and do that musical you were supposed to do.” I’ll be here, and I swear I’ll be the same person. Go ahead and get that jump shot off, sis!

What directors are you dying to work with?

Washington: PTA. Paul Thomas Anderson, all the way. And Barry Jenkins, whose name comes up in the film. I’m ready.